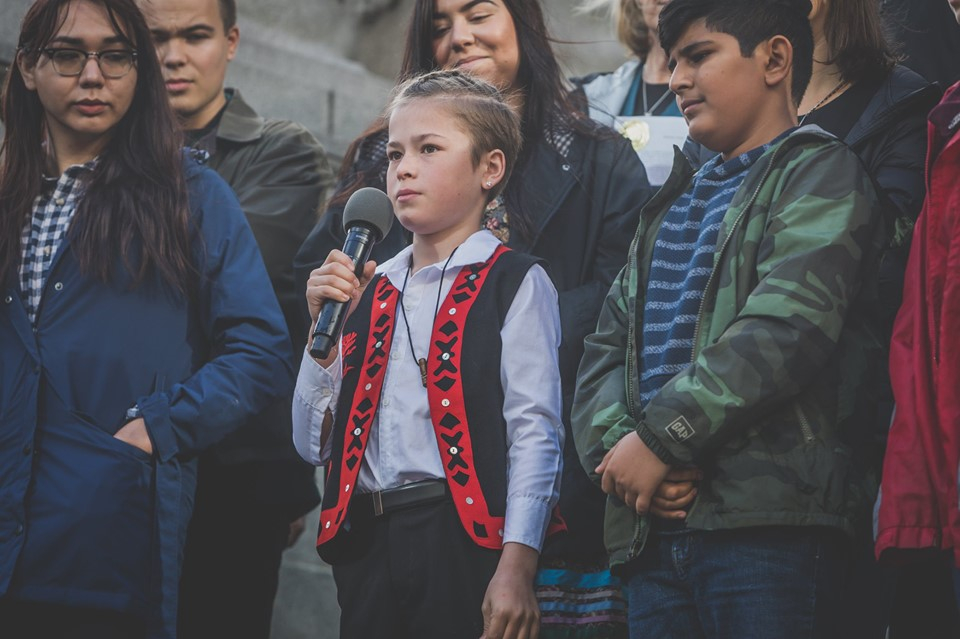 It dawned ominously, the day of the great Greta climate strike in Vancouver. Rain and wind pummeled the lower mainland while emergency sirens echoed across the city. Even the crows were nowhere to be seen, presumably riding out the storm in their Burnaby roosts, not willing to make their ritual morning migration across Metro Vancouver.

But by the time Canada’s young climate hawks took to the steps of the Vancouver Art Gallery in mid-morning, the sun was beaming down and the wind seemed only to sharpen the short, moving testimonials delivered by each young plaintiff in a newly-launched court case of kids suing the federal government for putting their lives at risk.

The opening statements were a last-minute addition to Sustainabiliteens’ planned events for the day. A day in which the global phenomenon of #grrlpowered climate strikers was going to get public assistance and support from Indigenous leaders and Canada’s Establishment Greens. The adults had arrived and would lend their long experience in movement organizing to give the kids an added boost.

And, in many ways, Vancouver’s intersectional, intergenerational climate strike was a great success. The David Suzuki Foundation, in particular, distinguished itself. Under the new leadership of Stephen Cornish, the foundation allocated real resources towards rearguard support for the youth, in whatever way the kids deemed most useful.

Others played useful roles as well. Greenpeace provided wizened, battle-hardened logistical expertise. The new Extinction Rebels served up volunteers of all ages as parade marshals for the day.

Most visibly, First Nations leaders turned out in great numbers, anointing the strikers with songs, blessing them with moral standing and sharing the teachings of elders passed down through timeless Indigenous generations.

But, as an organizing moment designed to swell ranks and propel momentum, the day was a mixed success. Impressive numbers turned out to see Greta in person. Vancouver Police Department estimated the crowd as large as 15,000 strong. It felt like the numbers peaked even higher, so perhaps a quarter of the Fridays for the Future march that blew away all expectations four weeks earlier.

The crowd was buzzing with school-aged teens, beaming moms escorting younger kids, bemused dads shouldering tots and others of all ages, brimming with excitement, radiating relief to no longer feel alone and crazy — to finally feel sane in a world that has, seemingly forever, appeared deaf to the warnings of scientists and blind to obvious calamity.

But the pre-march remarks would take a strange, tone-deaf turn. An interminable list of adults took to the microphones, dominating the first act of the youth climate strike. Many were the usual suspects from previous decades of dour climate demos. Environmental elders held forth about the old days. Veteran activists castigated the teens and toddlers for their institutionalized, systemic racism at the march one month earlier. Speakers ranted about respect while demonstrating none, either in tone, or for the organizers, or their audience.

The speakers were a marked contrast to the buoyant pair of emcees. Two engaging local teens who repeatedly thanked everyone for coming out, obviously thrilled by the size of the gathering. But, the crowd grew increasingly restless with long-winded lectures about… well, various important issues, as the event slipped further and further off schedule. It was, by the end, more than a five-hour long affair (without a Porta Potty in sight), purportedly organized to grow a movement of kids and activate their parents and grandparents.

One woman, clearly feeling browbeaten, leaving long before the march could begin, was muttering about never in her life having had to weather so much narcissism in a movement.

It was all perfectly understandable. First Nations activists have for so long been denied platform or voice to address brutal grievances. Movement elders have struggled for — much less — long, mostly ignored and dreaming of just such an uprising, one worthy of humanity’s eleventh hour.

But the long-time activists are not helping this movement to flourish if their contribution is to suck oxygen from the spirit of youth. There is so much promise in the current zeitgeist. I marched with a friend who described fascinating research about the power of movements that harness bookend generations: when the girls and the grannies, the kids and the seniors, converge — those of us in the middle don’t stand a chance. That pincer may yet pierce the complacency and inaction of leaders who still dither and delay while our planet burns. We should give it every chance of success.

Thankfully, Act One of the climate strike finally did come to a close. The march began. Vibrancy returned. Teens fanned out through the marching masses leading call and response. Kids waved handmade signs full of creative irony, blunt assessments, and not a little raunch.

Weaving its way through the downtown core, the enormous crowd palpably affected shoppers, intrigued citizens and quizzical tourists. The bike cops couldn’t help but grin as drivers in stranded cars and blocked intersections surrendered to the moment, cheering and honking in support of Vancouver’s Sustainabiliteens and the thousands of Canadians who had rallied to the school strikers’ conch calls.

Upon returning to the central square hours late, the momentum faltered worryingly again for awhile. Another procession of adult artists and speakers took to the mikes. Scattered chants of “Greta, Greta” began to intrude. Frantic moms broke away, racing for the mall bathrooms at Pacific Centre, towing anguished kids clutching at their bladders.

But the undeniability of this amazing global youth phenomenon broke through in the end. The Tsleil-Watuth’s impressive Will George, who has emerged from the Trans Mountain pipeline Watch House as a powerful voice of terse clarity, handed off to Grand Chief Stewart Phillip.

It had been hard to make out what previous speakers were saying across the restless masses but the Grand Chief’s curious intonations and compellingly humble statesmanship quieted the crowd.

He began speaking about his 40 years leading rallies in that same square. The Grand Chief proved, as he has so often, to be both wise and canny as well as a very compassionate leader. He struck exactly the right tone, leading the crowd for just the briefest of moments into reminiscence before launching towards the future: “But I have never seen such a crowd gathered here before!”

And, finally, it was time. The Indigenous leaders draped a ceremonial blanket on the shoulders of tiny Greta. And she, hesitantly, took the microphone.

You will have seen her speeches before. And probably the one she gave in Vancouver on Friday. It was her trademark combination of awkward oratory, earnest statistics and searing truth. “If the adults really loved us…,” is still haunting me. Greta was a class act, acknowledging the stolen lands and leadership of First Nations and endearing herself to Vancouver by quoting repeatedly from the speech Severn Suzuki delivered to the Rio Earth Summit in 1992, then just 12 years old herself.

On the way home, I noticed the crows were back. The windstorm was still gusting and great murders of them were dancing the sky — a glorious maelstrom of corvid ecstasy.

Along Broadway, I ran into a friend, still in rubber boots and wrapped in raingear. She was crestfallen thinking that Greta hadn’t spoken at the rally. She had come early, was inspired by the lawsuit kids, listened to all the pre-march speechifying, chanted herself hoarse through downtown and, at some point, long after returning to the square, she figured that Greta just wouldn’t be speaking that day, for some unadvertised reason. Tired out, she had headed home.

She perked up considerably as I described Greta’s talk. And she said she’d probably be willing to come back again. “But, next time, can’t we just let the kids get on with it?” she asked.

Particularly given the rhetorical as opposed to factual character of the title for this piece (and the very strongly negative frame it provides for what follows), I feel strongly that this piece belongs in the Opinion rather than Analysis section.

Erin, I read your comment and I appreciate your feedback. I struggled for a while deciding, opinion or analysis. It's in opinion now. Your point is a good one.

I found this piece rather

I found this piece rather disappointing. Veteran activists trying to warn the youth movement about typical strategic mistakes is hardly hijacking, even if those activists are narcissistic and boring. I hope National Observer one day does a piece about the actual hijacking of the youth movement, by green capitalism proponents. It is actually happening, and has been described in some obscure publications.

The link did look like it could be to “a piece about the actual hijacking of the youth movement, by green capitalism proponents.” Yes, this hijacking “is actually happening, and has been described in some obscure publications.” It's described in detail by Cory Morningstar, whose investigative journalism is strongly endorsed by Hiroyuki Hamada here: https://off-guardian.org/2019/09/20/in-defense-of-cory-morningstar-manuf...