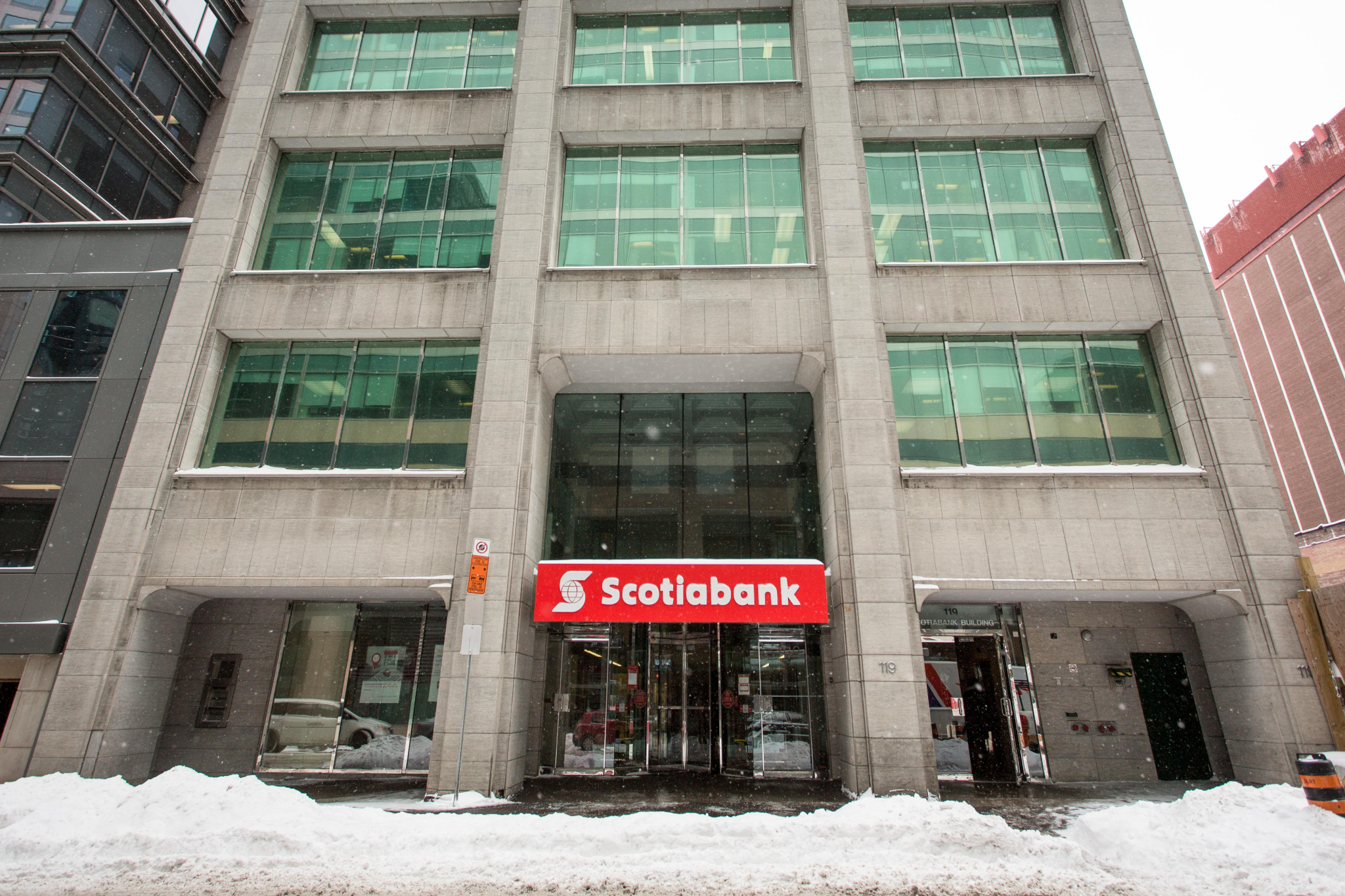 File photo of a Scotiabank outlet in Ottawa on March 15, 2017. Photo by Alex Tétreault
Previous story
Next story

Scotiabank, a major provider of fossil fuel financing, is investing $100 billion to reduce the effects of the climate crisis, and training staff to assess the climate risks of their commercial and corporate clients, the bank said Thursday.

The decision by Canada’s third-largest lender to make such a large environmental investment by 2025, and commit to a range of other green measures, is being seen as a big step in the right direction. The new policy took effect Nov. 1 and was announced Nov. 14.

The bank is also one of the leading providers of financing for fossil fuels, according to data compiled by the Rainforest Action Network, Oil Change International and others. Since the Paris accord, Scotiabank has provided $92.16 billion in financing to the industry, data show. As a result, these groups raised questions about how Scotiabank’s promise will fit into its overall approach.

"It's good news that (Scotiabank) is wanting to invest $100 billion by 2025 in investments that will reduce climate change impacts,” Nathan Lemphers, senior campaigner at Oil Change International’s Energy Transitions and Futures Program, said in an interview.

“But you can't, on the other side, invest tens of billions of dollars into fossil fuel expansion at the same time. You need to have coherence and consistency; otherwise, the investments in fossil fuel expansion will cancel out any goodwill or positive environmental impacts that you'd get from today's announcement."

Scotiabank’s announcement also came on the same day that the European Investment Bank, the largest multilateral financial institution on the planet, said it would end its own fossil fuel financing by 2022, underscoring the shift that is starting to take place in the financial world when it comes to propping up oil and gas operations.

National Observer asked Scotiabank whether it was coupling its announcement Thursday with a commitment to stop financing fossil fuel expansion. “We are committed to working with our valued partners across the energy sector as they navigate the energy transition,” said Erin M. Truax, senior manager of communications.

Carbon pollution from burning fossil fuels such as coal, oil and gas and their products, like gasoline, is collecting in the atmosphere and heating the planet, causing climate change, which is increasing the frequency and severity of heat waves, wildfires, floods and droughts, and threatening crops, freshwater and ultimately the livelihoods of hundreds of millions of people.

Firms may be forced to pay for damages caused by this extreme weather, or see oil and gas holdings devalued or exposed to lawsuits trying to recover losses, Canada's financial regulator has warned.

The Bank of Canada has said banks that lend money to the oil and gas sector are exposed to these potentially destabilizing risks, making climate change a vulnerability to the financial system. Last month, the Business Council of Canada said firms have an “obligation” to disclose how climate change will disrupt their plans, following advice from a federal panel which had concluded the same earlier this year.

Truax said staff in Scotiabank’s banking and credit teams are now being trained to assess both physical climate risks — including exposure to wildfires, flooding, drought or sea-level rise — and so-called “transition risks,” meaning those stemming from the company’s reputation, market forces or government regulations.

“Scotiabank will enhance this process and training over time,” Truax said.

It made the promise alongside four others: ensuring climate-related risk “transparency” and disclosure in the bank’s reporting, including the “physical and transition risks associated with climate change” in its risk management, decarbonizing the bank’s own operations and establishing a climate “centre of excellence” that will host workshops and publish research.

The bank said it will pursue its commitment by growing low-carbon markets, developing “new products and services” and otherwise directing funds to support the Paris goals. Scotiabank “supports the principles of the Paris Agreement,” the bank declared in a statement.

“Scotiabank's commitment to mobilize $100 billion by 2025 to reduce the impacts of climate change will help to accelerate the transition to a low-carbon and more resilient future,” Truax said.

The drop-off in fossil fuel financing has started to hit Canada’s oilpatch. Norway’s municipal employees pension fund, for example, sold off its last stakes in companies with oilsands operations. That followed Zurich Insurance Group, one of the world’s largest insurance companies, stating in June it would no longer underwrite companies that generate a significant portion of their revenue from the extraction of oil from the oilsands.

On Thursday, the European Investment Bank (EIB) announced it would “no longer consider new financing for unabated, fossil fuel energy projects, including gas, from the end of 2021 onwards.”

EIB vice-president Andrew McDowell pointed the finger in a statement at the “global energy industry,” saying carbon emissions reached a record high in 2018 and “we must act urgently to counter this trend.”

Jason Disterhoft, climate and energy senior campaigner at Rainforest Action Network, pointed to the group’s report alongside Oil Change International, Banktrack, Sierra Club, Indigenous Environmental Network and Honor the Earth that tracked bank financing for 1,800 companies that are active across the life cycle of fossil fuels.

In that report, called “Banking on Climate Change,” 2019 version, Scotiabank came out ninth overall, and fourth when it came to financing for fossil fuel expansion specifically. It had received a grade of “F” for its performance.

"Scotiabank's public promise of $100 billion in the next five years to reduce the impacts of climate change won't undo the damage from their $92 billion in fossil financing in the three years since the Paris Agreement was adopted,” Disterhoft said.

“While we need more banks to reform their practices, the truth is Scotiabank has been heading in exactly the wrong direction: their fossil financing rose significantly each year post-Paris, almost 50 per cent higher in 2018 compared to 2016. What's more, they're the top Canadian banker of fossil fuel expansion by a 33 per cent margin,” he added.

"If Scotiabank really wants to fight climate change, they should stop financing fossil fuel expansion and commit to phasing out their fossil financing in line with cutting emissions in half by 2030 and to zero by 2050."

All the Canadian chartered

All the Canadian chartered banks are in it up to their teeth. Apparently Zurich is still willing to play ball with the federal government, calling them "a valued partner."
High time the Canadian pension funds all dumped their tarsands investments, too: not even because it's the ecologically right thing to do, but because they're a really bad investment.

To put fossil fuel financing in perspective, the Banking on Climate Change report noted in the article lists total fossil fuel financing world-wide at $1,900 billion (US?) over the years 2016-2018 from 33 mostly foreign banks. The top financier is JPMorgan Chase at $196 billion, RBC as the top Canadian financier at $100b, TD at $74b, Scotia at $70b, BMO at $57b, and CIBC at $37b. It sure makes a pathetic joke of Jason Kenny's contention that Alberta is besieged by foreign-funded environmentalists.

National Observer asked Scotiabank whether it was coupling its announcement Thursday with a commitment to stop financing fossil fuel expansion. Good question! “We are committed to working with our valued partners across the energy sector as they navigate the energy transition,” said Erin M. Truax, senior manager of public spin. Un-spun, this can be interpreted to mean, "we'll give the fossil-fuel sector as much money as it can swallow, providing they can pay". Take-away: the more that can be done to tip the risk-return balance unfavorably for the fossil-fuel sector, the more we'll see the banks fueling the sector's expansion backing off the sector.