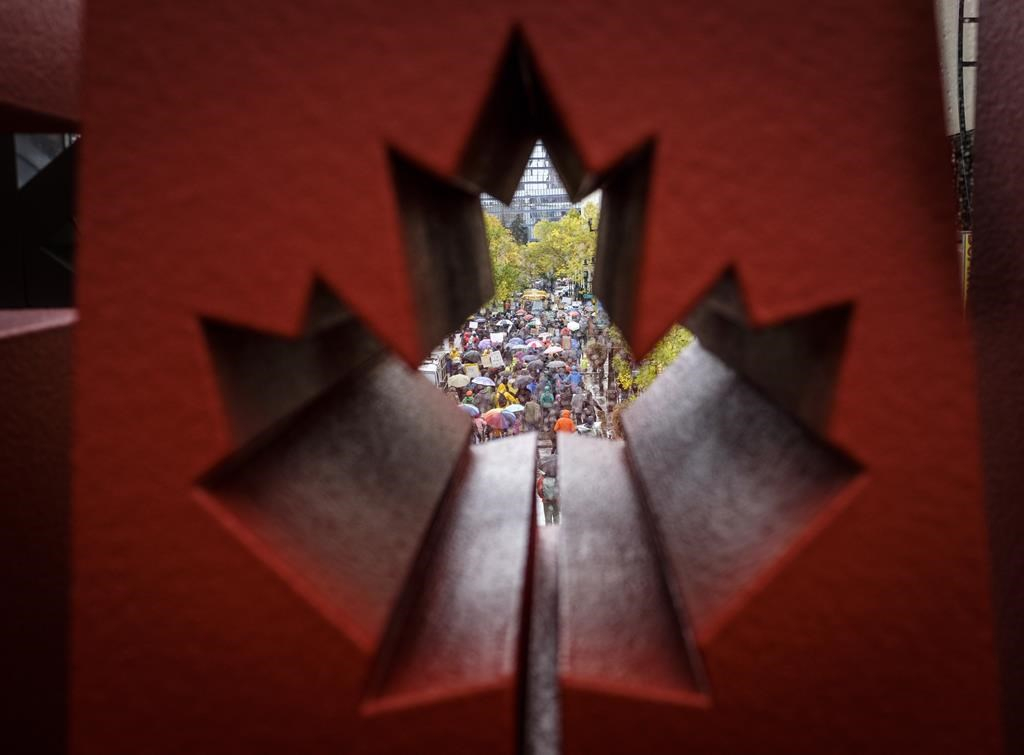 People march through the downtown core during the climate strike in Calgary, on Friday, Sept. 27, 2019. File photo by The Canadian Press/Jeff McIntosh
Previous story

In a courtroom in British Columbia Monday, Indigenous communities were arguing the federal government overstepped in approving the Trans Mountain pipeline expansion and that it has to be stopped over concerns about its impact on the environment.

One province over, lawyers were in a courtroom in Edmonton, arguing the federal government barged into Alberta's provincial jurisdiction in imposing a carbon tax and want it stopped over concerns about its impact on the economy.

And in a boardroom in Toronto, executives from some of Canada's biggest oil companies were sitting across the table from environment leaders, academics, Indigenous leaders and government officials hoping to find a way to bridge the Grand Canyon-sized divide.

"I think this is particularly about the future of Canada's oil and gas sector in a low carbon world," said Stewart Elgie, director of the Environment Institute at the University of Ottawa.

"If we get this wrong it could rip our nation apart. If we get it right it could be nation-building."

Elgie was among the participants Monday at the inaugural meeting of the Energy Future Forum, a new project conceived by the Public Policy Forum to find solutions for climate change in Canada. He said he found it fitting that the meeting was happening at the same time as the two court cases.

Among the 30 people seated with him were executives from Suncor Energy, Imperial Oil and Shell Canada Ltd., as well as representatives from the World Wildlife Federation, the International Institute for Sustainable Development and the federal and Alberta governments. Two of Canada's big banks, RBC and CIBC, were represented, as was the Canadian Council for Aboriginal Business.

Edward Greenspon, president of the Public Policy Forum, said the recent federal election drove home how much Canadians want to see action to address climate change. But it also drove home how worried those in the resource sectors are about their jobs.

International investors are increasingly reluctant to invest in companies that don't have climate-change adaptation plans.

Prime Minister Justin Trudeau's climate and economic platforms are based on a notion that this country can reduce greenhouse-gas emissions while building pipelines and extracting more oil, particularly if technology is made available that can reduce the emissions coming from both producing and burning fossil fuels.

"I don't think governments can do this alone," said Greenspon. "It requires a full-court press."

Most energy forecasts show oil and gas as part of the world's energy mix for at least another two or three decades, so Greenspon said finding ways to reduce the emissions from those is a critical piece of the puzzle. Elgie agrees, saying it is not realistic to expect us to be off oil tomorrow.

Suncor Energy CEO Mark Little said the forum is looking to get beyond the rhetoric and the polarized voices in the debate and find consensus in the middle. Suncor itself has invested in a number of things to reduce its own carbon footprint, setting a target to cut the emissions produced per barrel of oil by 30 per cent by 2030, replacing coal-fired power generators with natural-gas versions and building a wind farm in Alberta.

The forum intends to meet as a whole at least three times a year for the next few years, with the expectation of smaller, more frequent meetings with specific industries or on particular issues as well.

Climate change not a one-minister job

IPCC projections inform us we

IPCC projections inform us we need to reduce emissions 7% per year for the next decade. Until and unless these bankers and fossil fuel proponents have the technology available right now that will help us to do that, we should be making every effort to reduce the dependency we have on coal, oil, and gas right now. It isn't sufficient to muse about future technology, nor to look at reducing the cost to produce the oil in terms of emissions, while not counting the emissions from burning the oil. The emissions figures on gas extraction seem also to have been faked to ignore methane production, so claiming you're moving the bar far enough by burning gas instead of coal is just weak and disingenuous.

Why do we want to stick to fossil fuels anyhow, when their burning not only will push us into extinction via emissions, but when their extraction, transport, and burning also pollutes our air, water, and soil? Answer: we don't. Let's face reality and move on quickly to something better, healthier, and survivable.

The Energy Future Forum looks like a group will work toward supporting the fossil fuel industry.
The Trudeau government does not represent Canadians. This government advocates for a pipeline and purports to consult with First Nations. He makes superficial, meaningless changes such as changing the NEB to the CRA. He promises things that he has no intention on following up on once he is in power. He only represents what keeps him in power which follows the money which follows the oil and gas, the wealthy. I simply don't understand how he can look at the destruction he is causing and live with himself. He is stealing the future. A man with children of his own. This is incomprehensible.
Yes, the recent federal election drove home how much Canadians want to see action to address climate change. But it also drove home how worried those in the resource sectors are about their jobs.

Agreed. This is a totally

Agreed. This is a totally inadequate and dangerous argument to make under the guise of climate mitigation. Setting targets for the reduction of emissions on oil and gas extraction makes it sound like a helpful strategy when all the scientific evidence says we need to be leaving it in the ground.

This type of toes-in-the-water approach won't "solve" the climate crisis. In fact, the notion that our altered climate is simply a problem to be solved, is ludicrous. Species extinctions, now understood to be an ongoing planetary catastrophe, don't wait for concepts like 30% reductions ten years hence. The crisis is now, and has to be addressed by the entire community, not "executives" of the companies creating the crisis as if they had a magic bullet. What's more, you have to take their leap of faith that they can actually meet the goal in ten years. Their industries are based on a foundation of perpetual growth--so 30% is actually more like 50% when a decade of growth is considered. That sounds like a goal that can't be achieved with this type of current thinking.

A few points that seem to me

A few points that seem to me to be blindingly obvious:
1) We need to be moving forward based on the technology we have *now* -- and the petro industry can't get free passes or drive the decisions engine.
2) Incremental improvements is ridiculous. Gas plants have to be built: you can't burn gas in a coal plant. So why not go straight to GO ... calculate the optimum balance between direct-to-green and coal shutdowns. Because the amount of emissions saved by skipping the interim conversion-to-gas, will considerably outweigh the questionable benefits to be got from building new infrastructure and the plan being to retire it in no time flat.
It makes no sense to waste $$ on such, when it could go, instead, to wind farms and solar on every rooftop. Invest instead in installing the solar, maintained by the installer, rented by the householder, with a set feed-in tariff and a proviso that during hours power is being generated, it is free to the homeowner, with excess production delivering a credit to them.
I read of a similar program in Germany, which included an EV and charger, also maintained by the company) for the equivalent of about $250/month.
3) Looking at who's invited to the party, it looks like we need to get our government off its oil addiction.