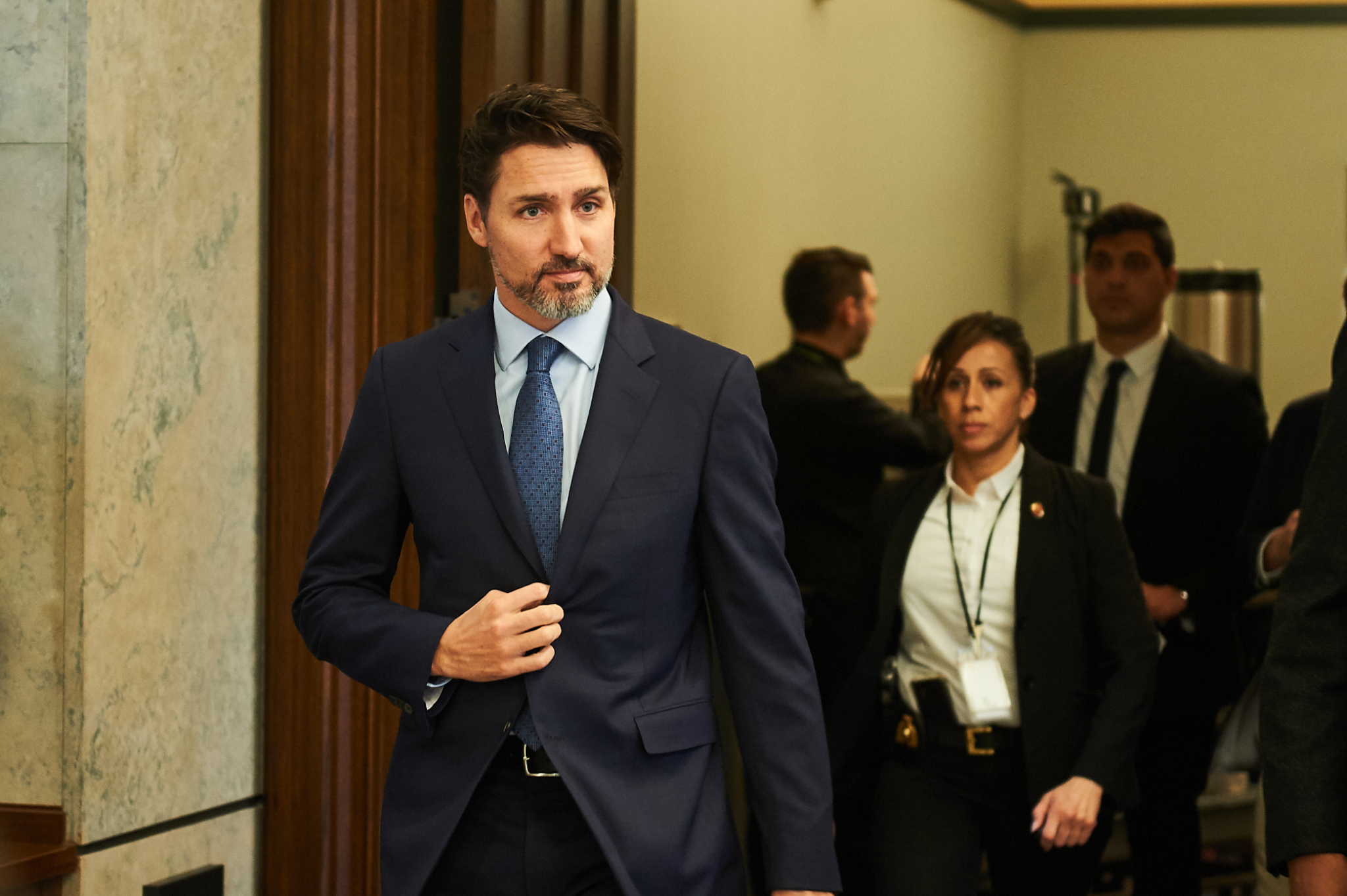 Prime Minister Justin Trudeau enters the House of Commons from a hallway in West Block on Tuesday, Feb. 18, 2020. Photo by Kamara Morozuk
Previous story
Next story

Prime Minister Justin Trudeau was roughly halfway through a statement on the rail blockades and protests that have gripped the country for almost two weeks when he had to sit down because the shouting had become too loud.

Trudeau was speaking in the House of Commons on Tuesday to members of Parliament, as they returned from a week-long constituency break. He used his time to call for "peaceful, honest dialogue" with those standing in solidarity with Wet’suwet’en Nation members, who have exploded in protest after the RCMP raided B.C. camps and made arrests to clear the way for a natural gas pipeline.

Blockades of rail lines are holding up the delivery of key supplies like chlorine for drinking water, groceries, lumber and other commodities while putting thousands of workers in jeopardy of losing their jobs, National Observer has reported. Conservative Leader Andrew Scheer has been calling for Ottawa to order federal police to “enforce the law.”

The government has warned that acting too quickly could carry serious consequences. In advocating a cautious approach, Indigenous Services Minister Marc Miller has invoked the history of prior police raids in Oka, Que., and Ipperwash, Ont,. in the 1990s that resulted in deaths and dozens of wounded.

“There are those who would want us to act in haste, who would want us to boil this down to slogans, and ignore the complexities,” said the prime minister, as members of Parliament began heckling him, or each other. “Who think that using force is helpful. It is not. Patience may be in short supply, and that makes it more valuable than ever. Indigenous rights, climate action —”

“ — what a joke,” someone interrupted loudly. Government MPs shot nervous glances around the room. Trudeau pushed through.

“ — law and order, building a clean economy; we will not achieve these things by degrading our demo —” then he suddenly stopped, mid-sentence, and sat down. House Speaker Anthony Rota had stood up from his chair.

“This is a very serious topic that we’re discussing today,” the usually cheerful Rota told MPs in a sombre tone. “But I’m starting to hear heckling from both sides, which really troubles me. I just want everyone to take a deep breath.”

“I think I might repeat my last line,” said Trudeau, rising again. “Patience may be in short supply, and that makes it more valuable than ever.”

'Formally extending my hand in partnership and trust'

One thing everyone in the room agreed on was that this was a critical moment for the country.

Miller met privately with Mohawk representatives on Saturday morning near Tyendinaga Mohawk Territory close to Belleville, Ont., where a rail blockade entered its 13th day on Tuesday. He came away stating he had made “some modest progress,” but that there was more work to be done.

Meanwhile, industry is getting increasingly vocal. The Canadian Manufacturers and Exporters, an industry group, warned on Tuesday that factory “shutdowns or layoffs” could be in the near future, and that “$425 million worth of manufactured goods that are usually carried by rail are sitting idle.”

On the holiday Monday, Trudeau convened a meeting of the Incident Response Group of senior cabinet ministers to discuss the issue. He had cut short a planned trip to Barbados to meet with Caribbean leaders, where he would have tried to convince them to support Canada’s bid for a seat on the UN Security Council.

The government is now “creating a space for peaceful, honest dialogue with willing partners” by “once again formally extending my hand in partnership and trust,” said Trudeau. He said he understood the “difficult times” that farmers, manufacturers and others are going through as a result of the blockades, and the government was “working hard to find a solution.”

Then he turned to the Wet'suwet'en and Mohawk nations, and “Indigenous leaders across the country,” saying he was “listening.” He said he had committed to Wet'suwet'en hereditary chiefs that Crown-Indigenous relations Minister Carolyn Bennett would “meet with them anytime” and that he hoped “the offer will be accepted.”

“We are not asking that you stop standing up for your communities, your rights and for what you believe. We only ask that you be willing to work with the federal government as a partner in finding solutions,” said Trudeau.

“You remind us — rightly so — that too often, trust has been betrayed in the history of Indigenous negotiations with Canadian governments. In fact, that underlines the difficulty of solving this situation today. But our common ground is the desire to arrive at solutions. We cannot resolve this alone.”

The alternative to dialogue, said the prime minister, was not a reasonable proposition.

“Do we want to become a country of irreconcilable differences, where people talk but refuse to listen? Where politicians are ordering police to arrest people? A country where people think they can tamper with rail lines, and endanger lives? This is simply unacceptable,” he said.

Conservative Leader Andrew Scheer called Trudeau’s speech “the weakest response to a national crisis in Canadian history” and “a complete abdication of responsibility and leadership.”

“I listened to the prime minister’s word salad just now,” Scheer said, rising in the House to deliver the Official Opposition’s response.

“At least two key things were missing: a clear denunciation that the actions of these radical activists are illegal. And some kind of an action plan that would put an end to the illegal blockades and get our economy back on track.”

Scheer repeated the accusations that he levelled last week: that the protests and blockades are being driven by “a small group of radical activists, many of whom have little to no connection to First Nations communities.”

He said they were “appropriating an Indigenous agenda, which they are willfully misrepresenting,” and then tied the Conservative Party itself to support for one portion of the Wet’suwet’en — those elected band chiefs who have signed agreements with the gas pipeline.

“On this side of the House, we stand in solidarity with the Wet’suwet’en people,” Scheer said to thunderous applause from Conservative benches.

“We stand in solidarity with the elected councillors of the Wet’suwet’en First Nation. We stand in solidarity with the majority of hereditary chiefs from the Wet’suwet’en First Nation, who recognize that these types of projects and investments are the only way to lift First Nations Canadians out of poverty, give them hope and opportunity and give the next generation of Indigenous Canadians the same quality of life that everyone else in this country enjoys.”

The next speaker to rise in the House, Bloc Québécois Leader Yves-François Blanchet, then tried to put some space between himself and his Tory counterpart.

“I need to nuance the terms of the Conservative leaders’ proposals, when he says ‘on this side of the House.’ We are on the same side of the House, but obviously you will never see someone from the Bloc Québécois put themselves in the middle of First Nations,” said Blanchet.

Good summary of what happened

Good summary of what happened.
Andrew Scheer needs to be asked what he means when he says he stands with the Wetsu'wet'en...to what degree..only to give lip service?...no where does he say he wants a dialogue or listen...with or to them..and it would indicate he has little regard for their interests..except as a means to his ends ..they are "not on" his "radar"
The government is wiser to move forward on a "listening" path..

He is saying that the

He is saying that the Conservatives will always stand by the Band Councils (but not the chiefs).
Band councilors are elected in accordance with the ancient and outdated Indian Act.

Worth repeating! Thank you, MP Blanchet!

One of the major flaws of the

One of the major flaws of the BCSC injunction is precicesly that: Justice Church inserted herself into the Wet'suwet'en internal politics, rather than heeding the multiple and repeated advice (Delgamuukw, Sparrow, Tsilqot'in, et. al.) of the SCoC. She was just begging to be overruled, as amply documented by West Coast Environmental Law's Gavin Smith: https://www.wcel.org/blog/invisible-thread-coastal-gaslink-decision-and-...

This link/statement is so worth reading to understand the thread that bind us and there are many.

Isn't Scheer's statement about "a small group of radical activists" — in which he echoes Jason Kenney's rhetoric about "foreign-funded environmentalists" — contributing zilch to the issue at hand?

What a stupid biased headline

What a stupid biased headline. It implies that Trudeau has somehow mishandled this situation which is not necessarily the case. A lot of the blame can be attributed to premier Horgan and to the division within the FNs community which the federal government should absolutely not be meddling in. Trudeau and Liberals, in general, are always booed in the House by Conservatives who behave like rude rowdy brainless teenagers. A more accurate headline would have been "Conservatives shout down Prime Minister as he tried to address rail blockades."