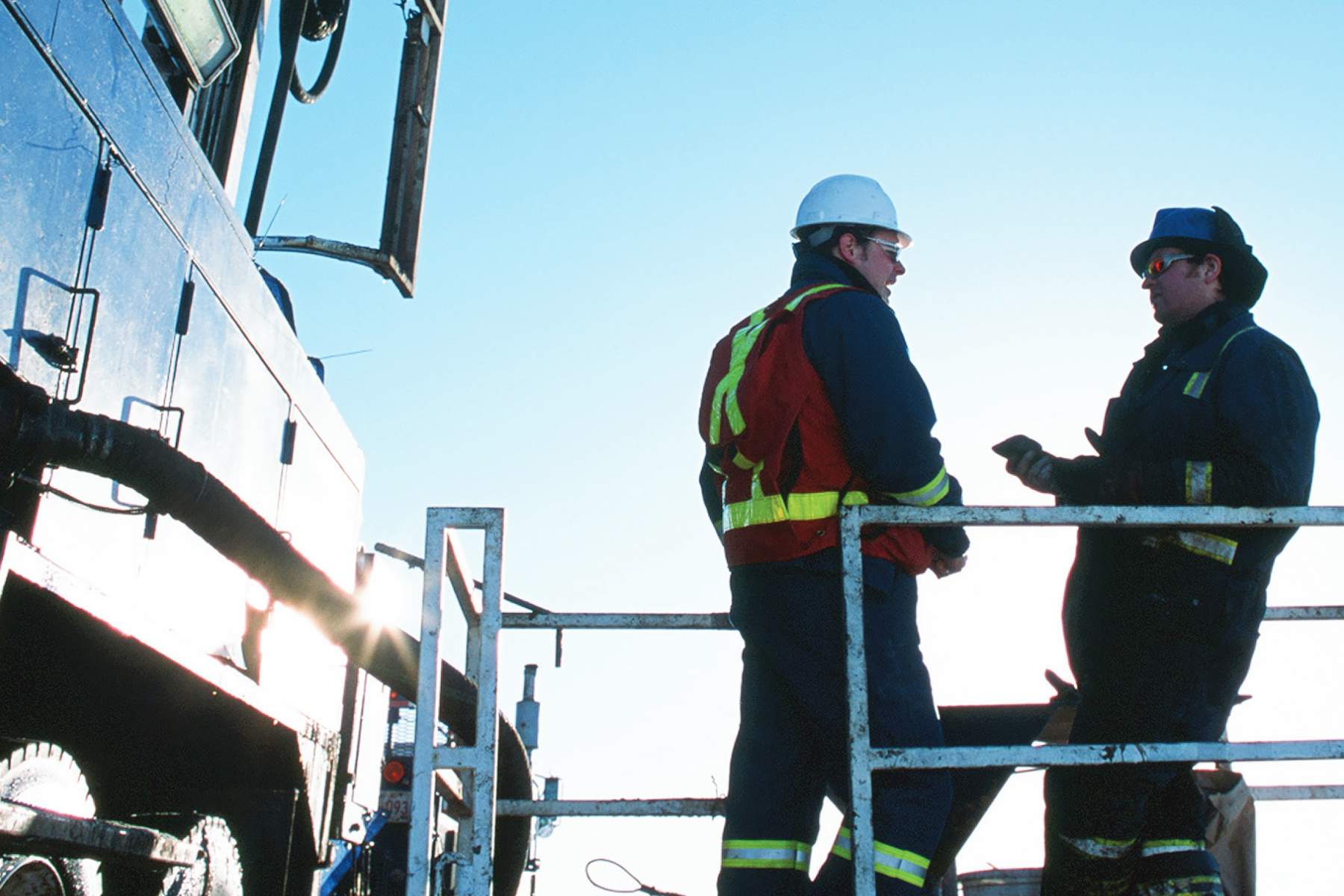 Workers are pictured next to heavy machinery in an undated photograph in a Teck Resources document about its Frontier oilsands project. (Handout photo)
Previous story
Next story

The project, a significant expansion of Alberta’s oilsands, has become a flashpoint of the climate debate in Canada. Though the company attributed its decision to the need for climate action in a press release late Sunday, the project also faced significant roadblocks and may not have been economically viable.

“The growing debate around this issue has placed Frontier and our company squarely at the nexus of much broader issues that need to be resolved,” said company president and CEO Don Lindsay in a letter to federal Minister of Environment and Climate Change Jonathan Wilkinson, posted online Sunday night.

“In that context, it is now evident that there is no constructive path forward for the project.”

The federal government was supposed to announce whether it would approve or reject the project this week. In a joint statement, Wilkinson and Natural Resources Minister Seamus O'Regan confirmed that Ottawa will no longer make a decision.

"We appreciate that Teck has made a difficult decision," the statement said.

If built, Teck Frontier was projected to produce four million tonnes of greenhouse gas emissions per year, running for 40 years. The company said the mine would have created thousands of jobs, and for many in Alberta, the project has become a stand-in for the economic future of the oilsands.

But even had it been finished, Frontier would’ve faced reduced oil prices and a lack of pipeline capacity, both significant stumbling blocks. The company also posted lacklustre fourth-quarter results last week, saying it would have to take a $1.13-billion hit if the federal government didn’t give the project the greenlight.

The federal government was expected to announce this week whether it would approve or reject the $20.6-billion, 260,000-barrel-per-day mine.

Supporters of the pipeline pointed to the thousands of jobs it was expected to create. Alberta Premier Jason Kenney has pushed for its approval, positioning it as an issue of national unity amid increasing discussion about Western alienation.

Teck Resources has withdrawn its application for the contentious Frontier oilsands project.

Those who oppose the project see it as a test of how committed the federal government is to climate action, a central tenet of its campaign in last fall’s election.

“This was a phantom project that didn't make economic or climate sense,” said Keith Stewart, a senior energy Strategist at Greenpeace Canada.

Now that it's off the table, hopefully we can focus on projects that will create real jobs solving the climate crisis,"

In his letter to Wilkinson, Lindsay said the company had worked to “confirm” that the project was economically viable. Lindsay also praised Teck’s environmental commitments ⁠— in December, it announced plans to be carbon-neutral by 2050 ⁠— and work to secure agreements with nearby First Nations.

In a press release, Kenney blamed Teck’s decision to pull the application on the Liberal government’s “lack” of “courage” in defending the “interests of Canadians in the face of a militant minority” ⁠— a statement that contrasts with Teck’s public explanation.

In his letter, Lindsay said investors and customers are now demanding government policies that reconcile the need for urgent climate action with resource development, something that "does not yet exist" in Canada, the letter said.

Lindsay’s letter said Teck supports stricter climate policy, including a carbon tax and a cap on oilsands emissions, two measures Kenney has pushed back against. (Alberta’s previous government passed an emissions cap on the oilsands, it hasn’t yet been implemented.)

"The promise of Canada’s potential will not be realized until governments can reach agreement around how climate policy considerations will be addressed in the context of future responsible energy sector development," the letter said.

"Without clarity on this critical question, the situation that has faced Frontier will be faced by future projects and it will be very difficult to attract future investment, either domestic or foreign."

O'Regan and Wilkinson's statement said the federal government agrees with Teck on the need for climate action and sustainable resource development.

"All orders of government need a real plan for climate action now and to reach a net zero economy by 2050," the statement said.

Lindsay also said the company isn’t shelving Frontier because of the controversy around the project.

"The nature of our business dictates that a vocal minority will almost inevitably oppose specific developments,” the letter said.

"Frontier, however, has surfaced a broader debate over climate change and Canada’s role in addressing it. It is our hope that withdrawing from the process will allow Canadians to shift to a larger and more positive discussion about the path forward."

It's worth reading the full

It's worth reading the full text of the letter. Here's a link for those interested:
https://www.teck.com/news/news-releases/2020/teck-withdraws-regulatory-a...

It sounds like part of the equation has finally come to realize what a big issue the tar sands are in Canada’s relationship/contribution to climate change. Hallelujah and blessings to the thoughtful business people of Tech Resources.

time to pivot to massive

time to pivot to massive investment in green tech in Alberta for real long term jobs!!!!! Thanks Teck.
There is geothermal solar, wind , hydrogen extraction all of which Alberta is rich in and well positioned to exploit with an already trained workforce.
What Alberta doesn't have is a responsible government governing for the citizens, the future the land. It has a shrill shill thug bought and paid for by predatory big oil. YOU voted these idiots in Alberta. YOU can vote them out. ( she says speaking from BAY STREET BANKER /propper-up of the tar sands-controlled Ontario now suffering under Doug and the Destroyers)

Yes...we've all let the denialist right in one guise or another capture our immediate future......women can pay the price yes......teachers, nurses, public sector workers.........all those 'second' jobs that don't count when we're wailing about jawb creation. Hard hats and heads can double down on the sectors we know are the main contributors to climate change, a plan which gives a new resonance to that old give away phrase 'we''re open for business'.....but at least we're still coming down hard on prostitution while ignoring the wave of sex trafficking that goes on in our 'open' for anything,economies.

A green new deal??? Pure magical thinking that, turning tar into oil, fracked gas into a natural climate saver....that's the real factoid driven stuff. And just imagine it: A FOSSIL FUEL COMPANY PROMISING TO GO CARBON NEUTRAL!!!! Digging up the last of the stuff........while emitting 0 carbon.

I can't wait. I sincerely hope I'm not alone. Transitioning now is our only real hope.

Good move by Tech! Their

Good move by Tech! Their proposal meant a new tailing pond reaching from McMurray to the NWT border and the Wood Buffalo Park. Crossing borders meant this would become a federal jurisdictional fight. In the presentation, they referred to "salts" as being one component where in fact they are several and include a high cut of Arsenic and Cyanide. The Mildred Lake well-known pond is the consistency of Yoghurt with a skim of so-called water on top of it.