By Damian Carrington | News, Politics
#1382 of 1885 articles from the Special Report: Race to a Safer World 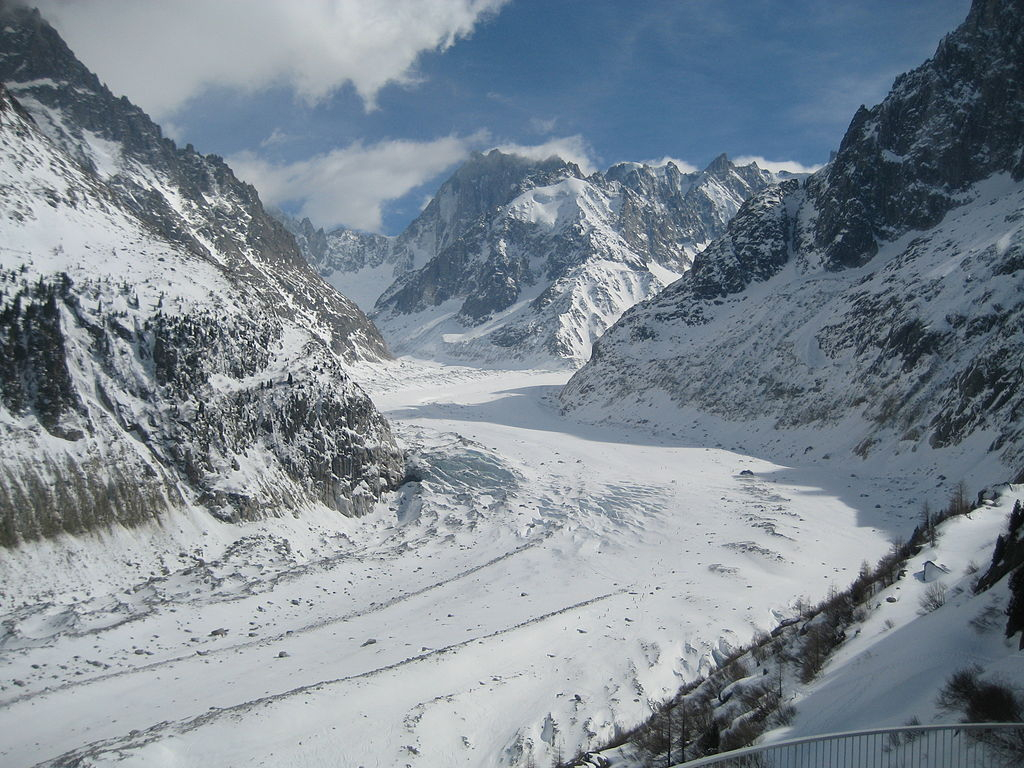 ‘Serious debates about what to do about the climate crisis are turning into action. The deniers have nothing to contribute to this.’ Signs of global warming on the Mer de Glace glacier in the French Alps. Author:Sylenius / CC BY-SA/3.0
Previous story
Next story

A new book, described as “deeply and fatally flawed” by an expert reviewer, recently reached the top of Amazon’s bestseller list for environmental science and made it into a weekly top 10 list for all nonfiction titles.

How did this happen? Because, as Brendan Behan put it, “there’s no such thing as bad publicity”. In an article promoting his book, Michael Shellenberger – with jaw-dropping hubris – apologises on behalf of all environmentalists for the “climate scare we created over the last 30 years”.

Shellenberger was named a hero of the environment by Time magazine in 2008 and is a loud advocate of nuclear power, but the article was described by six leading scientists as “cherry-picking”, “misleading” and containing “outright falsehoods”.

The article was widely republished, even after being removed from its first home, Forbes, for violating the title’s editorial guidelines on self-promotion, adding further heat to the storm. And this is why all those who deny the reality or danger of the climate emergency should be ignored. Obviously, I have broken my own rule here, but only to make this vital point once and for all.

The science is clear, the severity understood at the highest levels everywhere, and serious debates about what to do are turning into action. The deniers have nothing to contribute to this.

However infuriating they are, arguing with them or debunking their theories is likely only to generate publicity or money for them. It also helps to generate a fake air of controversy over climate action that provides cover for the vested interests seeking to delay the end of the fossil fuel age.

But the deniers are not all the same. They tend to fit into one of four different categories: the shill, the grifter, the egomaniac and the ideological fool.

The shill is the easiest to understand. He, and it almost always is he, is paid by vested interests to emit clouds of confusion about the science or economics of climate action. This uncertainty creates a smokescreen behind which polluters can lobby against measures that cut their profits.

A sadder case is that of the grifters. They have found themselves earning a living by grinding out contrarian articles for rightwing media outlets. Do they actually believe the guff they write? It doesn’t matter: they just warm their hands on the outrage, count the clicks and wait for the pay cheque.

The shill, the grifter, the egomaniac and the ideological fool: each distorts the urgent global debate in their own way, says the Guardian’s Environment editor,

The egomaniacs are also tragic figures. They are disappointed, frustrated people whose careers have stalled and who can’t understand why the world refuses to give full reverence to their brilliance. They are desperate for recognition, and, when it stubbornly refuses to arrive, they are drawn to make increasingly extreme pronouncements, in the hope of finally being proved a dogma-busting, 21st-century Galileo.

The ideological fool is the fourth type of climate denier, and they can be intelligent. But they are utterly blinded by their inane, no-limits version of the free-market creed. The climate emergency requires coordinated global action, they observe, and that looks horribly like communism in disguise.

They could explore the many credible climate action plans being pursued, including by those on the political right. But their cognitive dissonance forces them to the conclusion that because state intervention is wrong, acting to avert climate danger cannot be right. Intellectual gymnastics to “expose” climate alarmism then follow naturally.

But why do I say ignore them all? The climate crisis is urgent, and we need debate to drive action. However, vigorous debates over action are already taking place in good faith all over the world, from the tops of governments to the smallest local action groups.

Every nation in the world signed up to the 2015 Paris climate deal, pledging to keep global heating below 2C and ideally to 1.5C. The Intergovernmental Panel on Climate Change involves thousands of international scientists and is arguably the greatest scientific endeavour in history. It has spent three decades spelling out in painstaking detail how humanity is causing global heating, how catastrophic that threatens to be – and how drastic action is required to avert the worst.

The world of finance and business is catching up fast with the science, and almost all the technology needed already exists. In short, no sane or serious actor can countenance denial of climate danger. Bad-faith arguments motivated by greed, egomania or ideology have nothing to add.

Which brings me to the US president, Donald Trump. Political leaders are the exception to the rule. Their climate idiocy should be challenged, as they hold actual power. But even in this case, reality is fast debunking their proclamations.

In the US, coal is dying, because green energy is cheaper and cleaner, however great Trump claims he will make the miners. Even if Trump, and Brazil’s president, Jair Bolsonaro, persist, other nations will begin to ostracise them via trade sanctions and border taxes.

As for the shill, grifter, egomaniac and ideological fool, the reality of increasing climate impacts and successful action is fast exposing them as well. Those willing to employ the shills and the grifters are dwindling.

The book I started with has now been knocked off the environmental bestsellers list, fittingly enough by one published by the environmental hero Rachel Carson, in 1951. I can’t profess to know what Shellenberger’s motivation was, but one thing is clear: the egomaniacs and ideological fools will get the place in history they so lust for. It will be a small footnote marking the useful idiots of the climate war.

Big oil has been behaving

Big oil has been behaving like Big Tobacco. They've known for quite some time how dangerous their product is and have been spreading disinformation. There's a link to a CBC radio broadcast by an historian that breaks down the whole story:

Fifteen or maybe even 20

Fifteen or maybe even 20 years ago (how time flies when you're trying to save the world), the collective wisdom of environmental NGOs was to ignore the climate change "deniers, skeptics, ignorers and delayers"(my term for them). Tragically, that wasn't a wise strategy. But I suppose we couldn't have known how influential, pervasive, and downright popular their denial memes, obfuscations of the truth, and downright lies would be (at least in the highly developed Anglo-American nations).

We should have fought the deniers hard, revealing their investments in and connections to the fossil fuel industries, their ecological ignorance and scientific illiteracy, and (not to be unkind) the fact that the vast majority of them weren't popular in high school (okay, that's just conjecture, but I bet it's right ;-).

Their stalling is directly responsible for our passing of tipping points, and the perps (at least those who have been paid for their biosphere-killing work) should be held accountable. Thank goodness for the denier databases, which will make it easier to round them all up for the hard labour of cleaning up after extreme weather events. (Sorry, that's a vengeance fantasy that helps me carry on as a climate emergency activist despite the denier BS I have to wade through at every turn.)

Politicians who continue to

Politicians who continue to subsidize the fossil fuel industry and issue permits and promote fossil fuel infrastructure are climate deniers who should not be ignored. They are driving us to extinction.

A possible 5th type of

A possible 5th type of climate change denier would be, for lack of a better term, Denier2 (that's Denier squared). A classic example would be Ontario's PC government of Doug Ford, members of which, like wolves in sheep's clothing, deny they are deniers, but ensure that any attempt to mitigate or even adapt to anthropogenic climate change is to be dismantled, closed down, outlawed, barred, whatever. This type, including non-politicians, will take all steps possible to be included in any forum, committee, or organization that is struck to identify and implement actions to mitigate the current and soon-to-be-at-a-theatre-near-you problems that climate scientists, amongst others, have identified. And they will take all steps to interfere deliberately with any successful outcome that is being proposed. Therein lies the next BIG challenge. How do you "ignore" them?