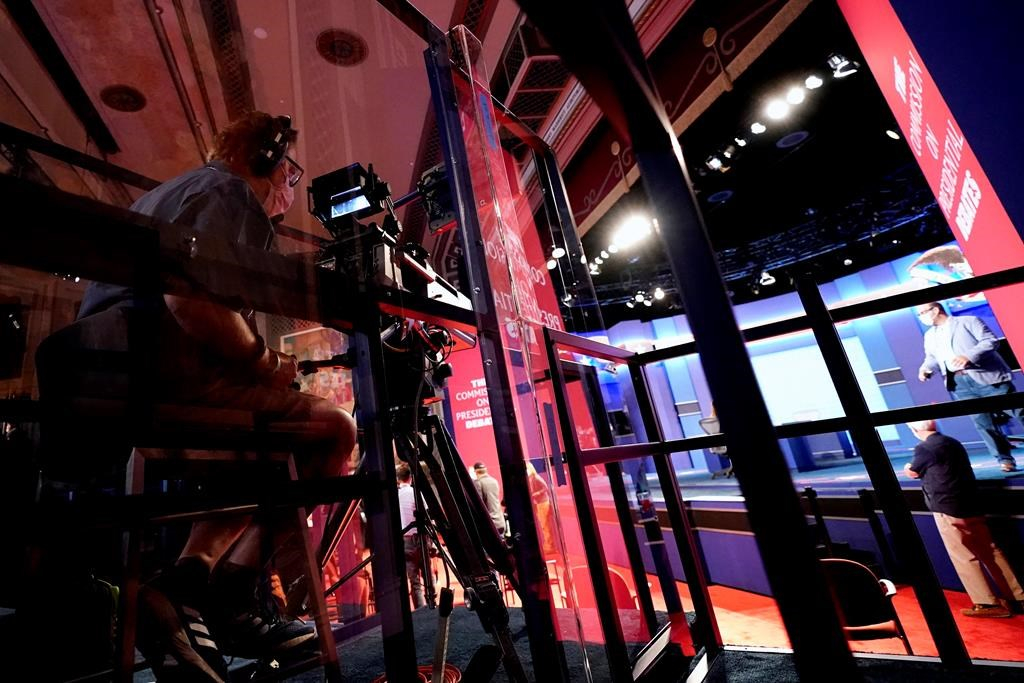 A camera operator is surrounded by Plexiglas panels to protect against COVID-19 as preparations take place for the vice-presidential debate at the University of Utah in Salt Lake City. Photo by The Associated Press/Julio Cortez
Previous story
Next story

Sen. Kamala Harris took the fight to Vice-President Mike Pence right out of the gate Wednesday, savaging the Trump administration's "incompetence" and "ineptitude" in its response to the COVID-19 pandemic.

Harris wasted no time from the start of the 90-minute debate in Utah, taking full advantage of the fact that the head of the much-maligned White House task force was sitting across from her.

"The American people have witnessed what is the greatest failure of any presidential administration in the history of our country," she said.

A laundry list of grim statistics followed: more than 210,000 dead, more than 7 million cases, one in five businesses shuttered and more than 30 million unemployment claims.

And she made note of Washington Post journalist Bob Woodward's tape-recorded revelations that Trump knew in February how serious the crisis could be, but kept it to himself.

"They knew what was happening, and they didn't tell you," she said into the camera. "They knew, and they covered it up."

Pence, confronted with a question from moderator Susan Page that noted the U.S. death toll is more than twice that of Canada, countered with a familiar message.

In his trademark baritone, he credited Trump with buying precious time by restricting travel from China back in January ⏤ a move Joe Biden opposed, he noted ⏤ and praised Americans for the sacrifices they have made over the course of the crisis.

He insisted Trump kept the potential scope of the pandemic out of the public eye to avoid inciting panic.

"From the very first day, President Donald Trump has put the health of Americans first," he said, Harris gently shaking her head, a smirk on her face.

Sen. Kamala Harris took the fight to Vice-President Mike Pence right out of the gate savaging the Trump administration's "incompetence" and "ineptitude" in its response to the COVID-19 pandemic. #VPDebate #kamalaharris #mikepence

Asked to lay out the Biden plan for dealing with the outbreak should he take office next year, Harris described a national contact-tracing strategy and a plan to fast-track vaccines, but stopped short of mentioning a mask mandate or further lockdowns.

Pence accused the Democrats of lifting the Republican plan.

"It looks a little bit like plagiarism," Pence said, "which is something Joe Biden knows a little bit about" ⏤ a reference to a controversy that effectively ended Biden's presidential ambitions in 1987.

Pence and Harris debated at a distance of nearly four metres and through two layers of clear Plexiglas, a visible reminder of the threat of COVID-19.

Throughout, Pence did his best to defend Trump and radiate common sense as a counterpoint to the daily chaos of the president, who called catching the virus a "blessing from God" in a video earlier Wednesday.

He cited the U.S.-Mexico-Canada Agreement as one of the administration's singular victories, noting Harris was one of only 10 senators who opposed the trade deal in the Senate.

He accused Harris of supporting the Green New Deal, the controversial climate change plan of progressive standard-bearers Alexandria Ocasio-Cortez and Bernie Sanders, and insisted over the protests of his opponent that Joe Biden is bent on banning fracking ⏤ a major issue in blue-collar battlegrounds like Pennsylvania.

Both candidates did their share of dodging questions, too.

Harris refused to be pinned down on whether a Biden administration would "pack" the Supreme Court by adding seats for liberal judges, while Pence nimbly danced past several questions, including one about why the White House hasn't been following its own recommendations for avoiding the virus.

But with polls suggesting a slide in support for Trump since last week's insult-laden confrontation with Biden, the stakes were higher for the vice-president.

Pence's special guests included Carl and Marsha Mueller, whose daughter Kayla was killed in Syria in 2015 ⏤ a curtain call of sorts after their gut-wrenching speech in August during the Republican National Convention.

On Wednesday, which happened to be the 19th anniversary of Operation Enduring Freedom, two members of the Islamic State militant group were indicted and returned to the U.S. on charges they helped abduct, torture and murder four American hostages from 2012 to 2015, including Kayla Mueller.

Pence related the story of the family's efforts to work with the Obama-Biden administration to rescue Mueller, describing it as a mishandled, delayed effort that missed its chance by just two days.

"Her family says, with a heart that broke the heart of every American, that if President Donald Trump had been president, they believe Kayla would be alive today," said Pence.

Harris could only acknowledge the tragedy.

"I know about your daughter's case, and I'm so sorry. I'm so sorry," she said to the couple off-camera.

She pivoted to Trump's record of denigrating soldiers and veterans, a charge that Pence took pains to denounce.

"President Donald Trump not only respects but reveres all of those who serve in our armed forces, and any suggestion otherwise, it's ridiculous."

Voters on both sides of the partisan divide are paying more attention to the running mates than they have in the past, not least because of the age and health of the presidential candidates themselves.

Biden is 77, and the Trump campaign has done its best to depict him as a frail old man with neither the stamina nor the smarts to be commander-in-chief.

The 74-year-old Trump, who tested positive Friday for COVID-19, has been trying mightily ever since to depict himself as a president at the peak of his power.

It's really a tragedy that

It's really a tragedy that Americans have only a choice of these two parties...!!