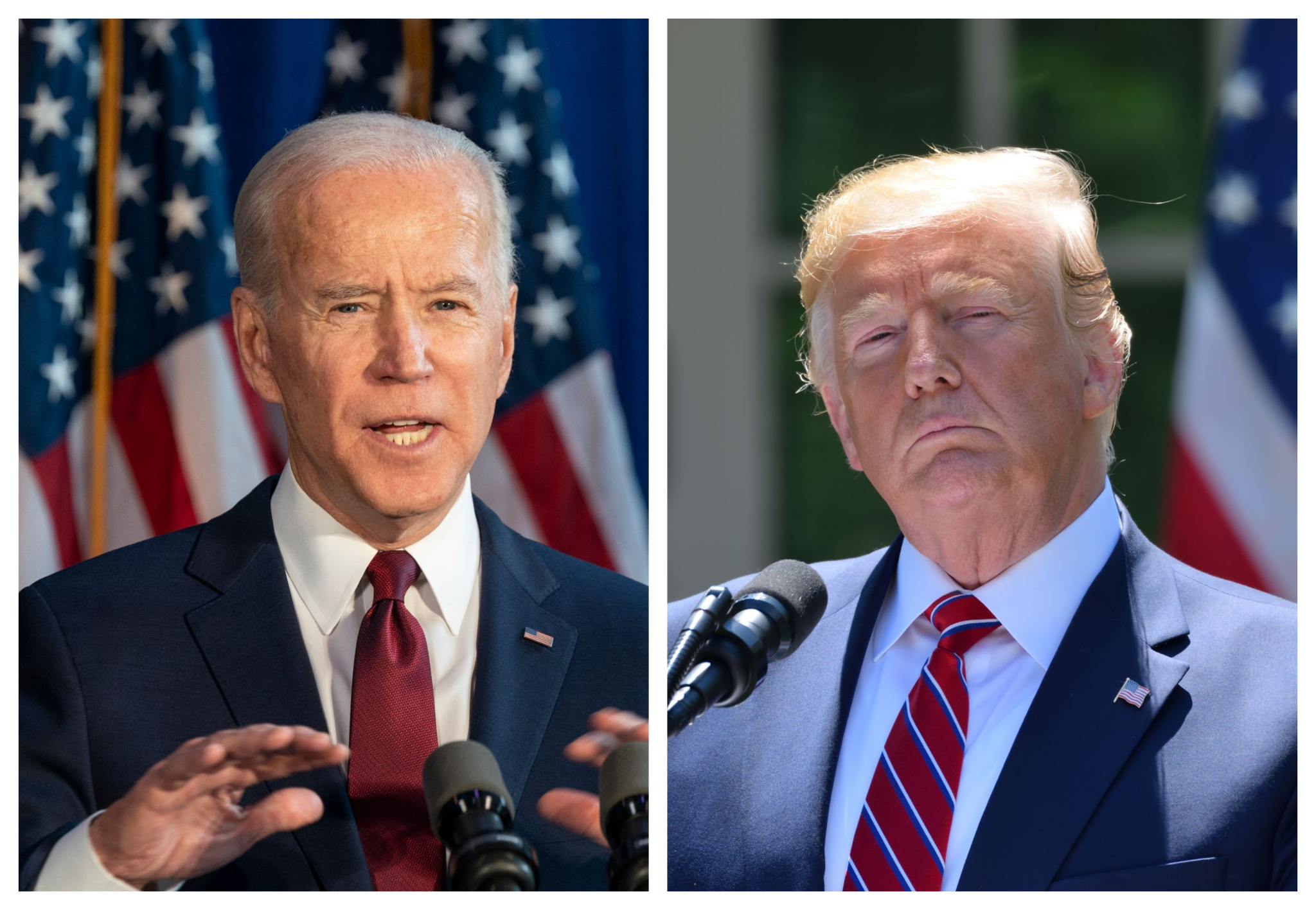 Trump set the tone in the debate for chaos and disrespect of norms. Photos by Shutterstock / Lev Radin / Evan El-Amin
Previous story
Next story

A confident and combative Donald Trump wasted little time testing the limits of Joe Biden's patience Tuesday in a bitter, angry and chaotic war of words and recriminations during the first in-person confrontation of the 2020 presidential election.

Within the first 15 minutes of the televised debate, hosted by Fox News anchor Chris Wallace, Trump had picked fights with the exasperated moderator as well as Biden, who could only grin ruefully and shake his head in disbelief.

Before long, Biden looked and sounded fed up as Trump, visibly in his element, needled him incessantly about his power to control the Democratic party and the influence of the "radical left."

"Will you shut up, man?" a frustrated Biden finally pleaded. "This is so unpresidential."

The other 75 minutes didn't get much better.

Throughout a night long on insults, short on substantive discussion and punctuated by all three men shouting over each other, Biden did his best to ignore his antagonist and address voters directly, speaking into the camera.

"Everything he's saying so far is simply a lie," he said. "I'm not here to call out his lies. Everybody knows he's a liar."

But he wasn't always able to resist rising to Trump's bait.

"The fact of the matter is I beat Bernie Sanders. I beat him a whole hell of a lot," Biden said when the president called him a proxy for the progressive Vermont senator who challenged him for the nomination.

Within the first 15 minutes of the televised debate, hosted by Fox News anchor Chris Wallace, Trump had picked fights with the exasperated moderator as well as Biden, who could only grin ruefully and shake his head in disbelief. #debates2020

On the subject of the COVID-19 pandemic, Biden accused Trump of keeping to himself what he knew about the outbreak's potential severity.

"He knew all the way back in February how serious this crisis was. He knew it was a deadly disease," Biden said.

"He's on tape is acknowledging he knew it. He said he didn't tell us or give people a warning of it because he didn't want to panic the American people. You don't panic, he panicked."

Trump, as he often does, insisted that by closing U.S. borders to travellers from China, he prevented an even greater tragedy.

"If we would have listened to you, the country would have been left wide open, millions of people would have died," he said.

Any notion that Trump might use Tuesday's debate to broaden his base was quickly shattered.

Asked to publicly condemn white supremacists, Trump instead told the Proud Boys to "stand back and stand by." He resisted committing to a peaceful transition after the election. He called out Biden's son for having a drug problem. And he described racial sensitivity training as a "radical revolution" and a "very sick" idea.

"If you were a certain person, you had no status in life," he said of why he cancelled such training for federal employees. "It was sort of a reversal."

There was a small, physically distanced audience at the venue at Case Western Reserve University in Cleveland, all of whom were required to wear masks and pass a COVID-19 test to attend, including Trump's family.

Pre-selected topics for the 90-minute debate included the pandemic, the economy, the Supreme Court, social justice issues and the integrity of the voting process.

Neither candidate was required to wear a mask, but Trump and Biden skipped the customary pre-debate handshake.

The president, meanwhile, was clearly more interested in relying on his now-familiar fondness for professional-wrestler showmanship.

Keen to portray Biden as a doddering oldster in a state of mental decline, the Trump campaign made hay earlier in the day with purported demands for an "earpiece check" to ensure no one offstage was feeding lines to his rival.

And for days, Trump has ⏤ with a straight face, seemingly ⏤ called on Biden to submit to a mutual drug test, claiming without any evidence that the former vice-president is using some sort of performance-enhancing substance.

Biden, who played along Tuesday by tweeting a pre-debate photo of earbuds and a quart of ice cream, struggled at times to avoid stooping to Trump's level, hoping to focus instead on the myriad weak spots in the president's record while in office.

He was not lacking for options.

The number of COVID-19 deaths in the U.S., the highest of any country on the planet, is closing in on 210,000, with the world on the cusp of a second wave. Unemployment is hovering at 8.4 per cent, up from historic lows but with analysts bracing for another downturn.

An explosive New York Times report paints a picture of Trump as a struggling, debt-saddled businessman who paid just $750 in taxes in 2016 and 2017, owes $300 million in loans and wrote off more than $70,000 for hair styling during his tenure on "The Apprentice."

Trump derided the report as "fake news," insisting he'd paid millions in taxes over the years, and even blamed the Obama administration, in which Biden was vice-president, for allowing him to claim generous tax credits.

"You are the worst president America has ever had," Biden sighed.

Trump's own musings about the integrity of the coming vote and apparent unwillingness to permit a peaceful transition should he lose, fuelled by baseless claims of looming mail-in ballot fraud, have experts describing him as an existential threat to American democracy.

That issue offered one of the night's few moments of clarity.

"Show up and vote. You will determine the outcome of this election," he said into the camera.

"He cannot stop you from being able to determine the outcome of this election."

Must-see TV: Trump, Biden to square off in first face-to-face debate of 2020 election

Bernie Sanders puts Trump on notice: 'You are not going to destroy' U.S. democracy

Kind of wonder how long this

Kind of wonder how long this journalist has been in Trump's pocket.

Don't know where you got that

Don't know where you got that idea from. The article was well balanced and informative and a good reflection of the debate, which I watched on Tuesday evening.

We watched the debate for

We watched the debate for less than 15 minutes and got so disgusted with Trump's interruptions, insults, outrageous claims, bullying, disrespect, etc. etc. etc. that we shut it down and put in a DVD of an excellent Danish drama, and much preferred reading subtitles for the rest of the evening.

It's very hard for most people to fathom how Trump can garner so much support. There is but a 5-6% poll spread between Trump and Biden and we can only hope that the majority of the undecided voters watching the debate reinforce Biden's lead. Swing the other way based on Trump's performance, then one is lead to think that half of Americans purposely want chaos to rein. They will get what they deserve if that is the case, but the rest of the world will suffer too.