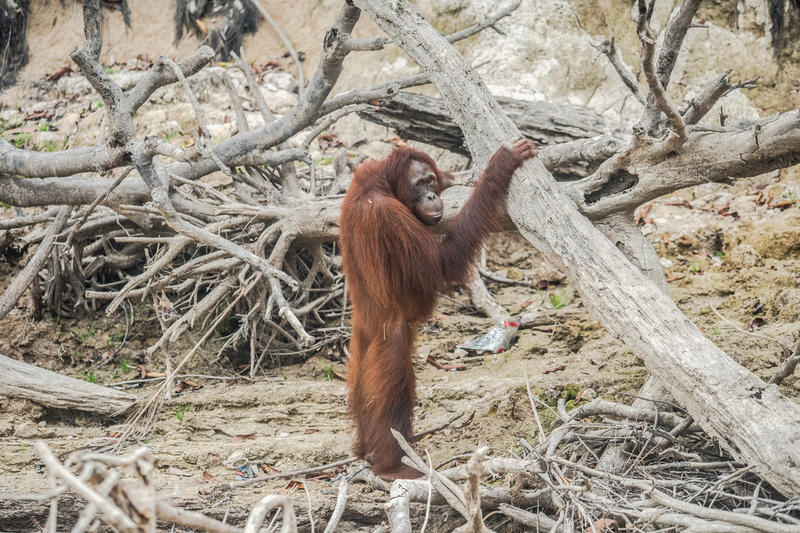 An orangutan walks in an area covered by haze from forest fires on Salat island in Indonesia. The species is threatened by the smoke and flames from fires clearing land for palm plantations. Photo by Jurnasyanto Sukarno / Greenpeace
Previous story
Next story

Canadians were stunned to learn recently that palm oil is being used to feed cows across the country. But #Buttergate is just the tip of an unsustainable food system that requires a co-ordinated federal effort to tackle.

In response to the public outcry, the Dairy Farmers of Canada lobby maintained that feeding cows palm oil is safe, but this completely misses the point. Palm oil presents a clear and present danger to the survival of a vast diversity of life on Earth. Palm oil is one of the most unsafe commodities around, and feeding it to livestock in any form should be immediately prohibited.

Farmers, in fairness, can’t do this alone. Canada’s small and organic farmers in particular have a huge role to play in re-localizing the food we eat and making Canada a more resilient and ecological nation. They deserve better options and support to ensure they don’t have to choose palm oil in the first place.

A number of commentators have defended the practice as “efficient” or “economical.” But let’s be clear — if palm oil from the rainforest for cows in the Prairies is either efficient or economical, we have a broken system, folks. Since 1970, the Earth has lost half its wildlife but tripled its livestock population. Our world’s capacity to produce food is being undermined by our failure to protect biodiversity. Buttergate typifies how we got here — the cold, hard “logic” of economics over all else. This is the logic of extinction.

Canadians also shouldn’t be forced to consume palm oil in the products all around. In 2019, the federal government released Canada’s new Food Guide, which recommends more fresh fruits, vegetables and plant-based proteins. But it has since been criticized for an over-reliance on food banks as a Band-Aid to rising food insecurity during the pandemic. A better approach would be to build food resilience from the ground up and empower our local farmers, urban growers and Indigenous food producers to tackle hunger with the amazing products grown right here in Canada.

Palm oil is a vegetable oil made from the fruit of oil palm trees — Elaeis guineensis — which come from West Africa but were taken to Southeast Asia in the 1960s. It’s added to many of the things we use every day: shampoo, bread, toothpaste, detergent, snacks and chocolate bars. And, apparently, to feed cows.

Oil palms are grown in many tropical countries, with Indonesia by far the largest producer at 58 per cent of global production. The industry is estimated to have caused 2.3 million hectares of deforestation between 1995 and 2015 there — more than double the size of Jamaica. Most Indonesian plantations are on the islands of Sumatra and Borneo where forest destruction has pushed all three species of orangutans to “critically endangered” status. Borneo alone has lost nearly 150,000 orangutans over the last 16 years.

Deforestation is also a major cause of climate change since large areas of rainforest grow in deep, swampy peat storing huge quantities of carbon. Plantations need dry land, so companies drain the peat, making it highly flammable. Fires often rage out of control, releasing even more carbon dioxide. According to reports, more than 900,000 people in Indonesia suffered acute respiratory infections due to the smoke haze from the devastating fires of 2019, and nearly 10 million children are at risk of lifelong physical and cognitive damages due to air pollution. Indigenous communities have also been severely affected and displaced. The Dayak people, among Borneo’s original inhabitants, heavily rely on the forest for their livelihood. Their culture and way of life are threatened because of palm oil.

Palm oil is one of the most unsafe commodities around and feeding it to livestock in any form should be immediately prohibited, writes @GreenShaneM. #ButterGate #biodiversity #cdnpoli

We clearly need a new vision for the food we consume — one that prioritizes resilience, accessibility, transparency and ecology. We have the right to know where our food comes from, who produced it and how it affects the planet. Agriculture Minister Marie-Claude Bibeau has a mandate that talks about fighting climate change, stopping biodiversity loss and building resilience, but there is clearly some internal resistance to change.

In its excellent recent report “Making Peace with Nature,” the UN’s Environment Program recommended moving subsidies away from industrial agriculture and towards more sustainable, local and plant-based foods. Greenpeace also wrote to the minister directly in the fall with similar recommendations.

Getting dirty palm oil out of the food we eat presents a huge opportunity to show truly global leadership.

The climate misinformation shell game is live and well in Canada. The Canadian government claims that we don't burn palm oil as a biofuel any more - but they allow it to be imported to use as animal feed and then burn the Canadian Canola oil that would have otherwise been used in animal feed. See, for example, https://www.nationalobserver.com/2021/01/05/opinion/bust-cleanbc-biofuel...