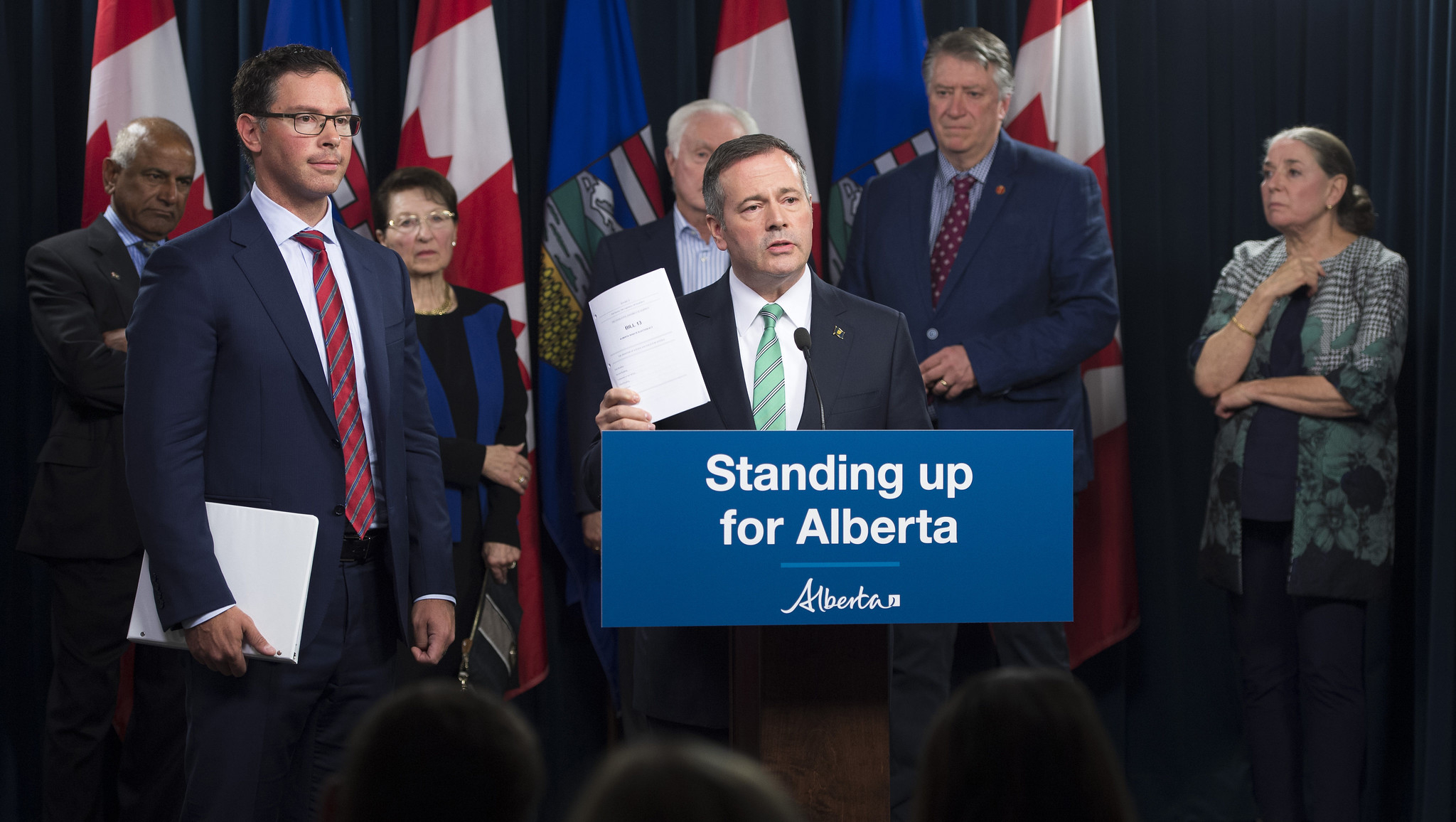 In this photo from June 2019, Premier Jason Kenney announces Bill 13, the Alberta Senate Election Act, that would reinstate Senate nominee elections to enable Albertans to choose. Photo by Government of Alberta / Flickr
Previous story
Next story

Oil and gas have traditionally been Alberta’s primary exports, but bad political ideas are a close second. This year is set to produce a bumper crop of them, with a referendum on the federal equalization program scheduled for October and the ongoing silliness of the province’s “Fair Deal Panel” threatening to put things like an Alberta Pension Plan on the books. But of all the ideas Alberta has attempted to export to the rest of the country, there might not be a worse one than holding one-off elections for an unelected Senate.

With two openings in the Senate for Alberta and an election set by the Kenney government for the fall, it’s an idea that’s rearing its head once again. The first such election took place back in October 1989, when the then-nascent Reform Party’s Stan Waters won almost 42 per cent of the vote. Since then, three other so-called “senator-in-waiting” elections have been held. Winners were appointed to the Senate when Conservatives were in power in Ottawa — and left waiting when they weren’t. So far, two candidates have declared their intention to run in 2021: former United Conservative Party president Erika Barootes and self-professed Senate abolitionist Duncan Kinney.

Not surprisingly, Erin O’Toole has pledged to continue the tradition of Conservative prime ministers appointing Alberta’s elected senators if his party forms the next government. “In a democratic country like Canada, our senators should be accountable to you,” he tweeted.

This echoes what Jason Kenney said in June 2019, after the Senate passed the bills banning oil tankers on the West Coast (C-48) and strengthening Canada’s environmental assessment process (C-69) in modified forms rather than killing them outright, as Kenney had been demanding. “Last night’s votes (in support of the modified bills) clearly demonstrated that elected senators — who have a direct line of accountability to Alberta voters — are much more likely to vote to defend our vital strategic and economic interests.”

But, of course, the Senate’s few elected senators have been no more accountable to the public than the appointed ones, since none have ever had to face re-election. And it’s that very lack of accountability that has allowed senators like Mike Duffy and Pamela Wallin, who were suspended for nearly two and a half years over the 2013 Senate expenses scandal, and Lynn Beyak, who drew criticism for her comments about residential schools, to remain in their taxpayer-funded jobs. Denise Batters, who had to apologize in 2018 for a tweet about Liberal MP Omar Alghabra and his Saudi Arabian origins, will sit in the Senate until 2045 — and never once have to face an electorate or account for her choices.

This isn’t to suggest that more elections are the solution here. As Paula Simons, a former columnist with the Edmonton Journal and member of the Independent Senators Group, noted in a recent tweet, “the independence of the Senate, and its political function, is predicated on the fact that senators stand outside the election cycle.”

That function is also predicated on the appointment of people who are genuinely interested in providing sober second thought rather than drawing partisan first blood. Simons certainly fits that description, as do most of the current government’s recent appointments, from Peter Harder (a former chief of staff to Joe Clark and deputy minister to Brian Mulroney) to Judith Keating (a longtime New Brunswick public servant and constitutional expert).

Those people are the product of the Independent Advisory Board for Senate Appointments, which was created in 2016 and is composed of three permanent federal members and two representatives of any province or territory with a vacancy that needs filling. Its existence neatly coincides with a shift in the kind of people being appointed to the Senate: more experienced, more accomplished and decidedly less partisan. The days of loyal bag men or party officials getting put in the Senate as a reward for their service are over — for now, anyways.

In 2019, the Liberal government took another step towards a new version of the Senate by dissolving its own caucus, effectively killing the two-party system that had prevailed in the Senate since Confederation and replacing it with a pastiche of new caucuses. If anything, the Senate is starting to look more like the judiciary, a place where merit and talent are the defining criteria rather than loyalty and longevity — and where that sober second thought is much less drunk on power than it used to be.

This has some obvious consequences for the meritless who used to get appointed to the upper chamber, but it will improve the institution itself. And as the United States has shown us time and time again, more democracy isn’t automatically a good thing. We don’t, as an example, elect judges in Canada because we understand their independence helps them do their jobs more effectively. Electing senators in our current hyper-partisan environment would make them more like MPs, which isn’t a good thing.

Of all the ideas #Alberta has attempted to export to the rest of the country, there might not be a worse one than holding one-off elections for an unelected #Senate, writes columnist @maxfawcett. #Cdnpoli

None of this is to suggest the Senate is beyond improvement. Term limits would have the benefit of sparing Canadian taxpayers the expense and embarrassment of carrying dead-weight senators to retirement. They might also allow the government to appoint more young people to the chamber, since their tenure would be more clearly circumscribed.

But holding elections for an unelected position is political posturing, pure and simple. And that’s ultimately what this is about for Jason Kenney: creating another opportunity to tell Albertans that Ottawa isn’t listening to their concerns. If nothing else, it’s a useful distraction from the fact that he isn’t really listening to theirs, either.

A senate filled on the basis

A senate filled on the basis of the popular vote in the federal election could temper the winner take all House of Commons where as little as 35% of the vote (or 20%-25% of the citizenry) can elect a majority government. Each party would present a list of potential Senators, and hopefully the Senate would be filled on equality basis and diverse representation.

Or have a lottery everyone from 16 to 75, randomly chosen to serve 4 years

Max Fawcett is one of the

Max Fawcett is one of the most insightful contributors to National Observer and hits the political nail on the head EVERY SINGLE TIME! His articles make me think, and laugh, and even tremble!