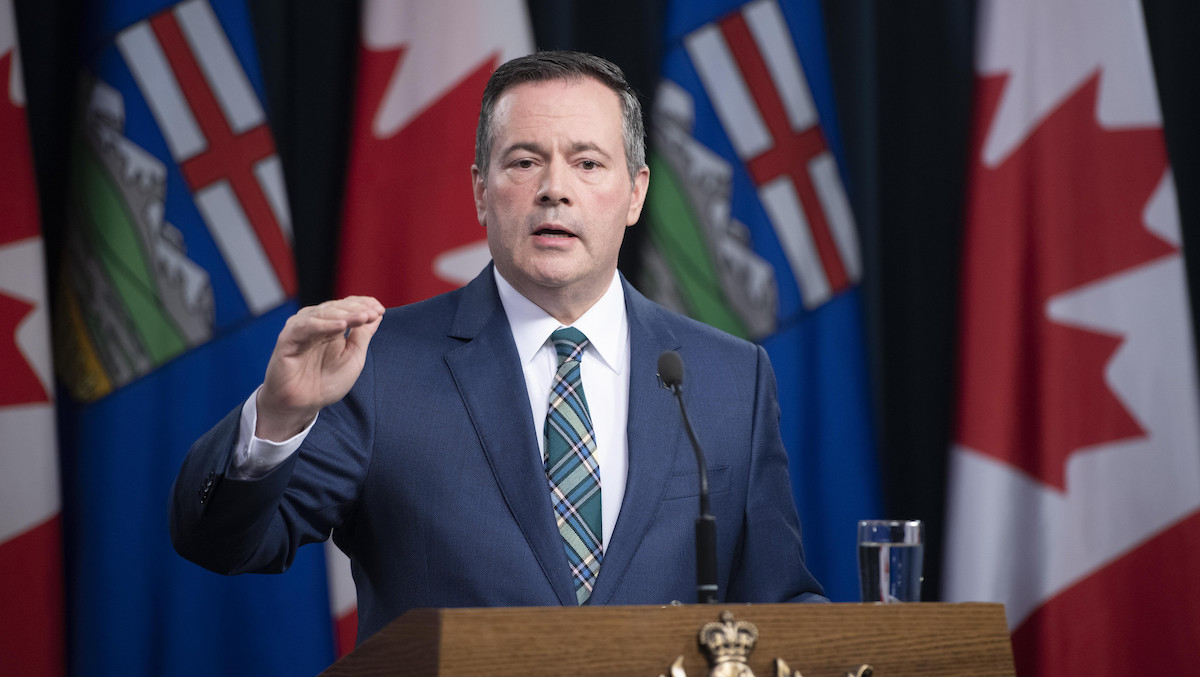 Alberta Premier Jason Kenney is fighting for his political life right now, and seems willing to risk losing that war again if he can win a battle. Photo by Government of Alberta / Flickr (CC-BY-NC-ND 2.0)
Previous story
Next story

When Justin Trudeau floated the idea of a “one-dose summer” a few weeks ago, he probably didn’t expect Jason Kenney to be one of its most enthusiastic backers. But after spending months criticizing the pace of the federal government's vaccine rollout, Alberta’s premier is suddenly all-in on the notion that one dose of a COVID-19 vaccine is all that stands between his province and what he’s calling the “best summer ever.” As Kenney tweeted last week, “In just a few weeks, Alberta will finally get #BackToNormal. That means backyard barbecues, weddings, concerts, festivals and the Calgary Stampede will be back on.”

That last point is central to Kenney’s latest relaunch strategy, which will see Alberta try to go from having one of the highest numbers of COVID cases per capita in North America to the lowest number of public health restrictions in Canada in a matter of weeks. On Tuesday, Alberta moved into Stage 1 of its new strategy, which allows larger social gatherings with distancing and outdoor dining, along with personal and wellness services by appointment. But by early July — just in time for the Calgary Stampede, as it happens — the province plans to lift all restrictions, including the ban on indoor social gatherings, and remove mandatory masking provisions.

Public health officials in Canada remain steadfast in the belief that slow and steady is what will win this particular race. "I am advocating a pretty precautionary approach,” Dr. Theresa Tam said on Friday. "The curve is only a 50 per cent reduction from the peak. We've seen what happened in the U.K. — they reopened only when they got to the bottom of the really big wave." The cost of ignoring this advice was made clear (yet again) in Manitoba, where a surge in cases has put the province’s medical system on the brink of collapse.

That lesson hasn’t sunk in for Jason Kenney. The breakneck pace of his reopening plan stands out from the more deliberate ones being set by governments in the rest of the country. In B.C., for example, a return to “normal social contact” isn’t expected until Sept. 7 at the earliest, while in Saskatchewan the third and final step won’t happen until three weeks after 70 per cent of Saskatchewan residents age 18 and older have taken one dose of a vaccine.

His pace even appears to be too fast for other festivals and outdoor events in Alberta. On Tuesday, Edmonton’s K-Days — an annual summer carnival and exhibition that’s held in late July — announced it wouldn’t be going ahead this year. It’s hardly alone there. Edmonton’s annual Folk Fest, which is held in early August, also decided against holding an event this year. “As profoundly disappointing as this news is,” its organizers wrote in early April, “we believe this is the only safe way forward.”

But Kenney seems determined to plow ahead. In doing so, he’s drawing on the approach taken in Texas, where the Republican governor pushed past objections from public health officials in April to open his state’s economy and ended up vindicated by falling case and hospitalization counts.

Of course, Texas has also suffered far higher rates of death than we’ve seen anywhere in Canada, and as vaccination uptake rates roll over there (only 44 per cent of those 12 and over in the state have gotten their first dose) it’s not at all clear that the war has truly been won.

But Kenney, who is fighting for his political life right now, seems willing to risk losing that war again if he can win a battle. He’s effectively betting all of his remaining political capital on Alberta winning the race back to the status quo. And there are few things more important to that sense of status quo in Calgary than dressing up in cowboy cosplay, eating deep-fried foods and exercising questionable (and often alcohol-fuelled) judgment.

Kenney’s desire to leave COVID-19 behind is understandable. After all, a record 78 per cent of Albertans told Leger last week that they don’t think the province has handled the pandemic well, while Kenney’s personal popularity is nearly as low as the pandemic’s. But in rushing to put the last 15 months behind him, Kenney may be making the exact same mistake that made those months harder than they needed to be.

And of all the things to hang your cowboy hat on, the Stampede might be the worst fit when it comes to avoiding a potential fourth wave of an infectious pandemic. After all, the culture of Stampede is many things, but conservative, in the most traditional sense of the word, isn’t one of them. Instead, it’s defined by an outsized appetite for risk-taking, both on the part of the cowboys performing in front of the packed grandstand and the people sitting in the seats, who tend to fill nearby emergency rooms with the kind of injuries more commonly associated with New Year’s Eve revelry. Once again, the health-care system that Kenney’s government has pushed to the brink repeatedly will have to bear the weight of his decision to put the economy ahead of public health — and his own political existence ahead of the lives of Albertans.

Some have compared the potential boost in morale from this year’s Stampede to the 2013 edition that was held in the wake of a massive flood, but the differences between a natural disaster and a pandemic should be apparent. As Calgary political scientist Paul Fairie tweeted, “I wasn’t at all nervous about the 2013 Stampede because, as far as I’m aware, it’s relatively difficult to catch and spread a flood.”

Jason Kenney is effectively betting all of his remaining political capital on Alberta winning the race from COVID-19 pandemic back to the status quo, writes columnist @maxfawcett. #ableg #cdnpoli #COVID

Letting loose and gathering with friends is an important form of self-care, and we all need more of it after over a year of isolation and separation. But that’s a long way from encouraging people to gather at a public event without masks, without the more robust protection of second vaccine doses and without the kind of social distancing still recommended by public health officials. Albertans will have to decide whether the party Kenney so clearly wants to throw is worth the hangover that could follow.

If this version of the

If this version of the Stampede includes indoor revelry, that's crazy talk.

If it's just the midway, rodeo, rides and barns showing off cows the size of a minivan, I doubt it'll be much worse than the scandalous rodeo the other month....which was associated with one case. The George Floyd Marches had little effect on case-counts on unvaccinated populations, and I don't see outdoor midway crowds that look about the same, as being riskier.

I haven't heard whether the Stampede will require vaccination, though. It would be a huge opportunity to get people to take the shot, and also make the Stampede safer. But, keeping G. Floyd in mind, I'd accept unvaccinated people who took a shot at the gate, as permission to enter.

I'll be in Calgary at that time. But I'll only go if everybody has at least one dose - and I've gotten #2 by then.

Oh, and, alas, they'd have to shut down at sunset. Outdoor transmission is rare, but 90% of the transmissions they did find, happened at night. Go, sunlight!!