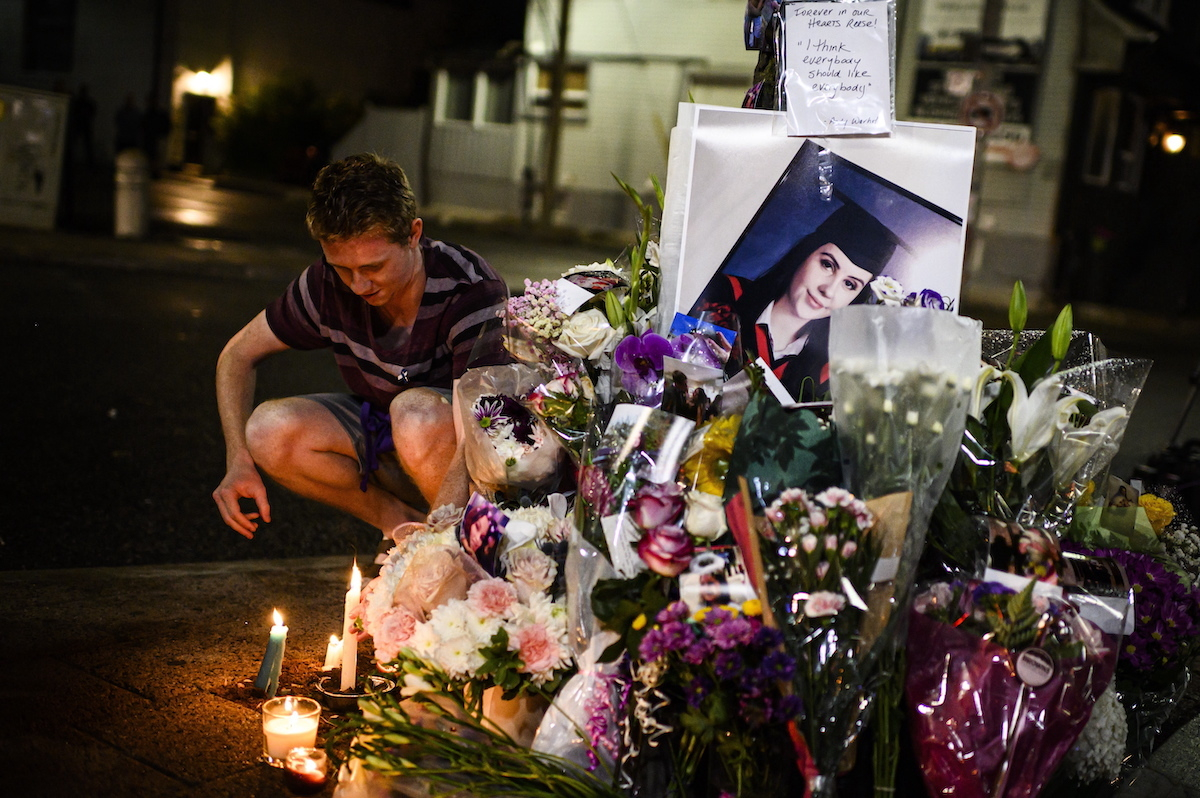 A friend of Reese Fallon, who was killed in the 2018 Danforth shooting, lights a candle in her honour during a community vigil in Toronto on July 22, 2019. File photo by Christopher Katsarov / The Canadian Press
Previous story
Next story

A lack of new gun safety measures could be a deal-breaker for Canadians who put their trust in the Liberals’ election promises, says NDP public safety critic Alistair MacGregor.

In an interview with Canada’s National Observer, MacGregor says the NDP is worried about a “patchwork quilt” of gun control policy since the laws could vary province to province.

The minority Trudeau government finds itself caught between Conservatives, who say they’re going too far by banning certain assault weapons and proposing to outlaw handguns, and the NDP, who argue handguns should be banned.

“That's the thing we need to kind of keep the Liberals accountable on because they have been in power now for six years.

“Announcements are cheap, they're easy to do, they usually get a big splash and a lot of media attention, but the important work is the follow through and really the finer details, the small print of what the policy actually entails,” says MacGregor. “That's the job I'll be having to do in the months ahead.”

Statistics Canada reports that the national rate for firearm-related homicide increased five per cent in 2020, the latest year for which statistics are available.

Quebec Premier François Legault laments he “doesn’t recognize Montreal” in the wake of that city's rising gun violence. The province has seen many gun-related incidents that have made headlines and sparked calls for change.

The Canadian gun debate, which has mainly focused on handgun bans, dominated the House of Commons throughout 2021, with Liberals saying they will not impose a nationwide ban but will work with provinces and cities to get handguns off the streets.

Cukier is the outspoken co-founder and president of the Coalition for Gun Control, founded in the wake of the 1989 Montreal Massacre (École Polytechnique tragedy).

“We saw what happened in the United States: D.C. banned handguns, people bought them in West Virginia. The same thing would happen here,” says Cukier in an interview with Canada’s National Observer.

“We really run the risk that we end up with inconsistent messages to people about handguns. The fact is, handguns are supposed to be — right now — restricted weapons used only in very limited circumstances.

“What we have seen in the last 15 years is we've gone from 360,000 legally owned handguns to over a million," says Cukier. “One million legally owned handguns in this country presents a very big public safety risk. We've seen this with things like the Danforth shooting, which involved not a smuggled but a stolen handgun.”

Wendy Cukier’s message to the federal government: ​​Public safety should be the priority.

With no national handgun ban and some provinces reluctant to enact stricter measures, the federal government has begun to appeal directly to mayors in cities such as Montreal, Toronto and Vancouver who may want help with new gun control measures.

Montreal Mayor Valérie Plante previously said she is encouraged Prime Minister Justin Trudeau agrees the federal government should do more to combat gun violence but says a handgun ban should apply to the entire country, instead of varying province to province.

In an emailed statement to Canada’s National Observer, Plante said: “If we really want to fight against gun violence, we must tackle gun ownership instead of transferring the responsibility to the provinces or other levels of government.”

Irvin Waller, a criminology professor at the University of Ottawa and author of Science and Secrets of Ending Violent Crime, has a special interest in violence prevention. In an interview with Canada’s National Observer, he said if handgun bans vary province to province, it would be easy for a firearm to be acquired in one province or territory and smuggled across provincial borders.

“Don't expect (a national ban) to reduce street homicides,” says Waller. “I think handguns are going to continue to be smuggled across the border. And if you put in a ban, the price is going to increase.”

Cukier and Waller’s concerns come at a time when a Montreal shooting has reignited the debate. In a seemingly random act of gun violence, 16-year-old Thomas Trudel was killed as he walked home from a park in mid-November. Close friends of the teen have since banded together in an effort to push the federal government to ban handguns.

The Trudeau government has reportedly pledged $1 billion to help provinces get rid of handguns, but the gun debate will be a pressing issue when MPs get back to work.

​​The money will help provinces implement and enforce bans, but the government is not ruling out allowing municipalities to access the money as well.

“While we fight COVID-19 and its consequences. While we grow our economy for everyone, we cannot turn away from other challenges. Gun violence is on the rise in many of our biggest cities. While investing in prevention and supporting the work of law enforcement, we must also continue to strengthen gun control. The government has taken important actions, like introducing lifetime background checks. The government will now put forward measures like a mandatory buyback of banned assault-style weapons, and move forward with any province or territory that wants to ban handguns.”

Gun debate remained in the House throughout 2021

On Feb. 15, 2021, during question period, the issue of the government’s commitments to strengthen gun control and ban assault-style firearms was brought to then-Public Safety Minister Bill Blair.

On May 25, 2021, the topic of gang and gun violence was debated during question period.

On June 21, 2021, the implementation of Bill C-71 was addressed during question period to Blair. This bill deals with background checks for a firearms licence, which was expanded to include a review of an applicant's life history, rather than just going back five years. It also deals with authorization to transport restricted and prohibited firearms.

Current Public Safety Minister Marco Mendicino acknowledged on Nov. 24 that Ontario Premier Doug Ford has resisted calls by cities like Toronto to ban handguns. “My message is: Let’s work together. Let’s find ways to get handguns and other guns off the streets.”

In an emailed statement to Canada's National Observer, the Canadian Association of Police Chiefs’ Special Purpose Committee on Firearms said: “Handgun issues in Canada tend to be regional, with handgun-related crime in some areas being relatively low compared to incidents involving long guns, replica firearms, etc. We need to find ways of reducing gun violence in our communities, using the best evidence-based practices.”

Waller says events such as the 2017 Quebec City mosque shooting have led to greater public support for a handgun ban. However, politics seem to be still playing catch-up.

“I think the policy is very confused at the moment.”

Some day, someone will

Some day, someone will explain clearly and logically, why anyone other than an armed forces member, or a member of a police service, needs a handgun. Needs.

I get that long guns are more difficult, because game hunting is still legal. But surely to heaven there is *someone* in the public service who can address that.

And as for what the government has been called assault weapons, clearly we need more informed and thoughtful terms and guidelines. But if you don't NEED it to hunt, well, to me, why do you need it at all?

The pressure of lobby groups, supported by the floundering NRA and its ilk, on politicians is significant. If these politicians don't know how to discuss resisting such pressure with their constituents, well, they're not worthy of their office.

It's appalling to me, and many many others, that this is still an issue, decades after the Montreal Massacre, and similar crimes.

Oh, and by the way? Before one of my country brethren jump on this aspect--I live in a very very rural area, and many many of my neighbours hunt. For food. Responsibly. And sanely.