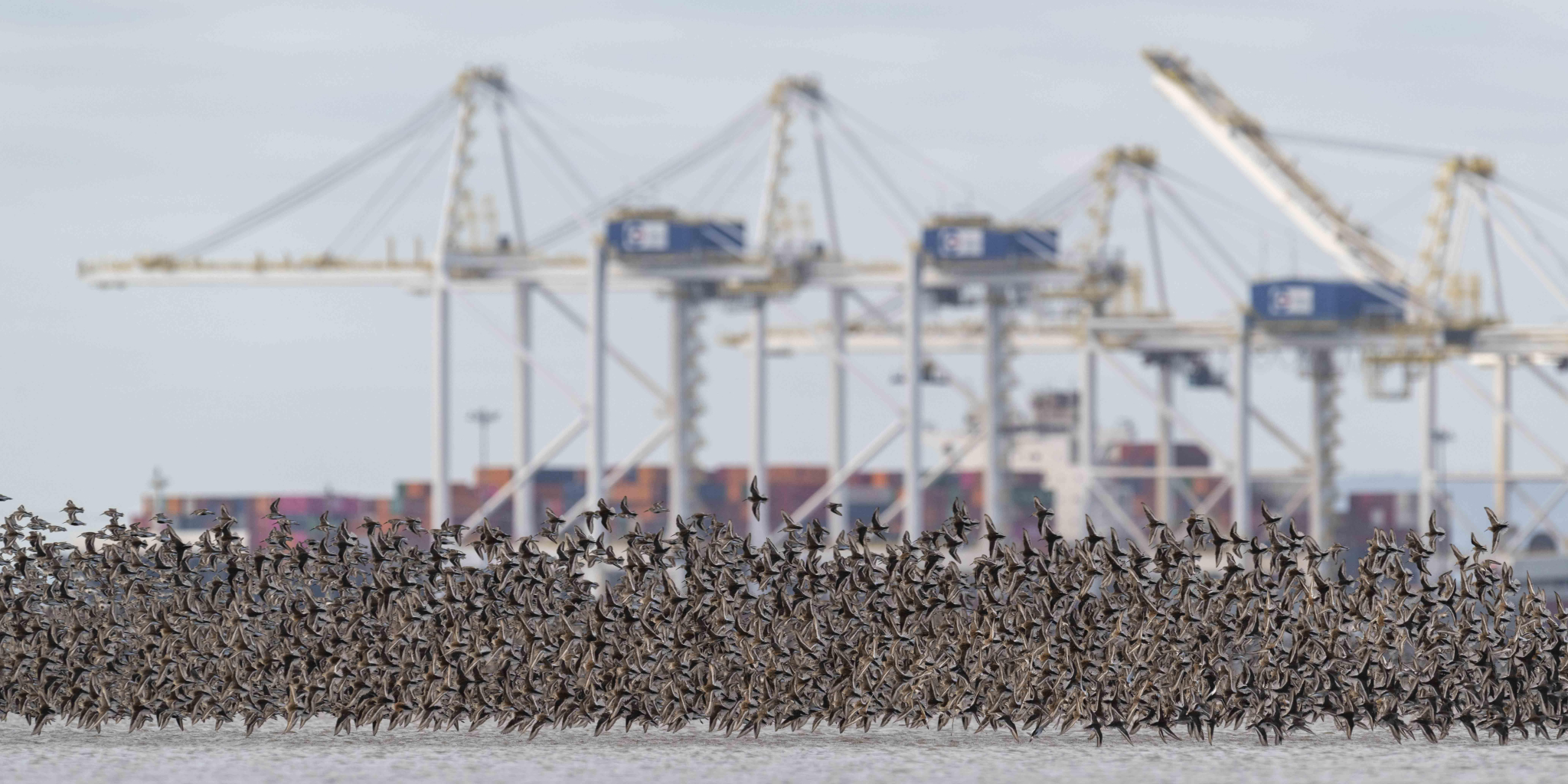 Western sandpipers take flight in front of the Roberts Bank port. A proposed expansion to the facility would put them and other shorebirds at risk, according to Environment Canada. Photo by Jason Puddifoot
Previous story
Next story

A damning document from Environment Canada that warned of disastrous environmental impacts was withheld from a key stage of an environmental assessment for a proposed Metro Vancouver shipping terminal.

Scientists who authored the report say the project threatens local wildlife, particularly the western sandpiper — a species of shorebird unique to the West Coast of North America that feeds in the nutrient-rich Fraser Delta during migration.

During the environmental assessment, Environment Canada scientists concluded: “Project-induced changes to Roberts Bank constitute an unmitigable species-level risk to western sandpipers, and shorebirds more generally,” and the only way to avoid the impacts “is with a project redesign.”

Despite the department’s unequivocal conclusion, a final submission outlining its position was not included in the materials given to the environmental assessment review panel and was not considered when the panel wrote its final report on the expansion, which could be decided by the environment minister as early as mid-February.

Roger Emsley, executive director of Against Port Expansion, got his hands on Environment Canada’s closing remarks through an access-to-information request that took roughly 18 months to be answered. He has since posted it to the Impact Assessment Agency’s public comment section.

Emsley also contacted then-environment minister Jonathan Wilkinson to ask why the department withheld the concerns of its own scientists.

In a signed letter, Wilkinson responded that Environment and Climate Change Canada “explored the option” of submitting closing remarks, but: “Upon review, it was determined that the expert input already tabled with the review panel stood for itself, and that closing remarks would not alter or add value to the Department’s analyses, conclusions and recommendations already on the record.”

The letter adds that the department “does not always present closing arguments.”

When Canada’s National Observer asked Environment and Climate Change Canada why it withheld its closing remarks, the same information Emsley received from Wilkinson was repeated, almost word for word.

If a Metro Vancouver shipping terminal project is approved, @environmentca says the risks to local wildlife would be significant, but the department failed to make its stance clear in the final stages of the environmental assessment. #cdnpoli

Emsley and other concerned parties were not satisfied with the response.

These closing remarks are akin to making a final argument to a judge, said Emsley. The review panel did not want new information, it asked for a summary of each participant's position on the project, he added.

The Roberts Bank Terminal 2 project involves building a new three-berth marine container terminal in Delta, B.C. The Vancouver Fraser Port Authority — which is spearheading the project — says the expansion is necessary to keep up with shipping container demand and to meet international trade objectives over the next two decades.

The estuaries and ecologically rich mudflats of the Fraser River Estuary are a critical stop for migratory birds like snow geese and western grebe diving ducks. The mudflats are key for shorebirds that fuel up for long flights by feasting on biofilm, a collection of micro-organisms that contain a fatty acid produced through changes in salinity, said James Casey, an expert on the estuary with Birds Canada.

Eating biofilm gives migratory birds “up to 15 per cent more power on their migration to their next stopover site, which is all the way up on Copper River Delta [Alaska],” said Casey. “They need that extra power to boost their migration.”

Environment Canada’s closing statement said the project would “impact the quality and quantity of biofilm available to shorebirds” and that there are “no practical mitigation measures” to address the “potential large-scale impacts” on changes to biofilm at Roberts Bank.

In an email to Canada’s National Observer, the port authority said it can mitigate effects on biofilm through project design so that there is enough food for birds and is also developing a manual on how to create biofilm habitats, citing “over 20 biofilm and shorebird studies” it conducted.

Environment Canada’s closing remarks said it is not currently possible to recreate the Roberts Bank mudflats like the port authority claims, and pointed to inconsistencies in studies the authority cited.

In a statement Environment and Climate Change Canada sent Canada’s National Observer, the department said it was clear about the unmitigable species-level risks to shorebirds and the fact there is “currently no way” to create biofilm habitats in its previous submissions to the review panel. Because of this, the department said a closing submission was not necessary because it would not “alter or add value” to information already on the record, which was similar to Wilkinson’s response to Emsley’s queries.

In its closing remarks, Environment Canada said it is not currently possible to recreate the Roberts Bank mudflats like the port authority claims, and pointed to inconsistencies in studies the authority cited.

The port authority’s science has also been panned by independent international experts like Peter G. Beninger, an expert on mudflat ecology and professor in the faculty of science at Université de Nantes, France.

Beninger said the port authority’s biofilm report that says impacts on biofilm will be little or non-existent “cannot be taken as evidence” and believes “any truly independent, knowledgeable scientist reading these remarks” will agree with his assessment.

He recommended the review panel reject the proposed terminal because the port authority’s case was not “scientifically credible” and noted basic errors in its scientific studies.

The public can submit comments on the proposed terminal until Feb. 13, and the environment minister will decide sometime after.

If Environment Minister Stephen Guilbeault rules against the Roberts Bank Terminal 2 project because of adverse environmental effects on biofilm and shorebirds, the Governor in Council decides whether those effects are justified and makes the final call.

The proposal has been met with opposition every step of the way and hundreds of public comments have been made so far.

Over the last five years, citizens, scientists and the City of Delta all voiced concerns about the impact the shipping terminal will have on local ecosystems and wildlife like chinook salmon, Dungeness crab, southern resident killer whales, and shorebirds.

In August 2020, former environment minister Wilkinson asked the port authority to provide additional information on how it would minimize risks to migratory birds, salmon habitat, critically endangered southern resident killer whales, and First Nations’ use of the area.

Guilbeault will “take into account all information submitted and received when making his decision for the Roberts Bank Terminal 2 Project” including the panel report, comments received during the public comment period, and the additional information Wilkinson requested from the port authority, according to Stéphane Perrault, a spokesperson for the Impact Assessment Agency of Canada.

Emsley and Casey want an end to any terminal expansion because Roberts bank is one of the most critical spots in North America for migratory birds and is home to at least 68 species of birds of conservation priority on the Fraser River delta.

This story has been corrected to reflect that eating biofilm gives migratory birds “up to 15 per cent more power on their migration to their next stopover site.”

The headline of this story has been updated to clarify that Environment and Climate Change Canada’s concerns about local shorebirds were included in the environmental assessment for the port expansion, however the federal government chose not to submit closing remarks detailing these concerns to the independent review panel.

The decision made half a

The decision made half a century ago to smack a major container terminal facility in the Fraser estuary was an environmental catastrophe. The estuary is one of the most important global bird resting and feeding spots for 5 million birds, Canada's most important migratory bird habitat and Canada's most important wintering habitat for birds of prey, shorebirds and waterfowl, as well as host to the world's greatest salmon runs (many already endangered) and the remaining southern resident killer whales (also endangered). It should have been formally protected as a National Wildlife and Marine Area: instead half a century of intense industrialization has brought the estuary to the verge of ecological collapse. Scientists warn it can't withstand Terminal 2. We don't need it, despite the Port's PR spin: Prince Rupert port, currently undergoing major expansion, is 2 days closer to Asia with major continental railway connections , has much less environmental damage and is welcomed by local residents. Independent trade advisors recommended expansion at Prince Rupert over Vancouver. The close to $4 billion Terminal 2 will cost is better spent on conservation purchases, rapid transit, social housing and other climate-friendly projects that will support sustainable jobs and communities, instead of ramming an unwanted and unneeded ecological timebomb into an estuary teetering on collapse.

Please write to the Prime

Please write to the Prime Minister and ask him to turn down the Terminal 2 application at
[email protected]; check out the Against Port Expansion website (https://www.againstportexpansion.org/). Thank you.

Gillian: I will write. And I

Gillian: I will write. And I will certainly mention that this suppression of scientific information (reminiscent of Harper-era practice) is entirely unacceptable. Neither the Review Panel nor the cabinet were likely to read a lengthy report to draw the same conclusions the scientists did - hence the utility of hiding the summary for eighteen months. Every such occurrence serves only to further erode public confidence in this Ministry's (and Minister's) judgement and objectivity. Good for Mr. Emsley for exposing this further example of process abuse and policy incoherence in Ottawa.