By Barry Saxifrage | Analysis, Climate Solutions Reporting | February 25th 2022
#1950 of 2090 articles from the Special Report: Race to a Safer World 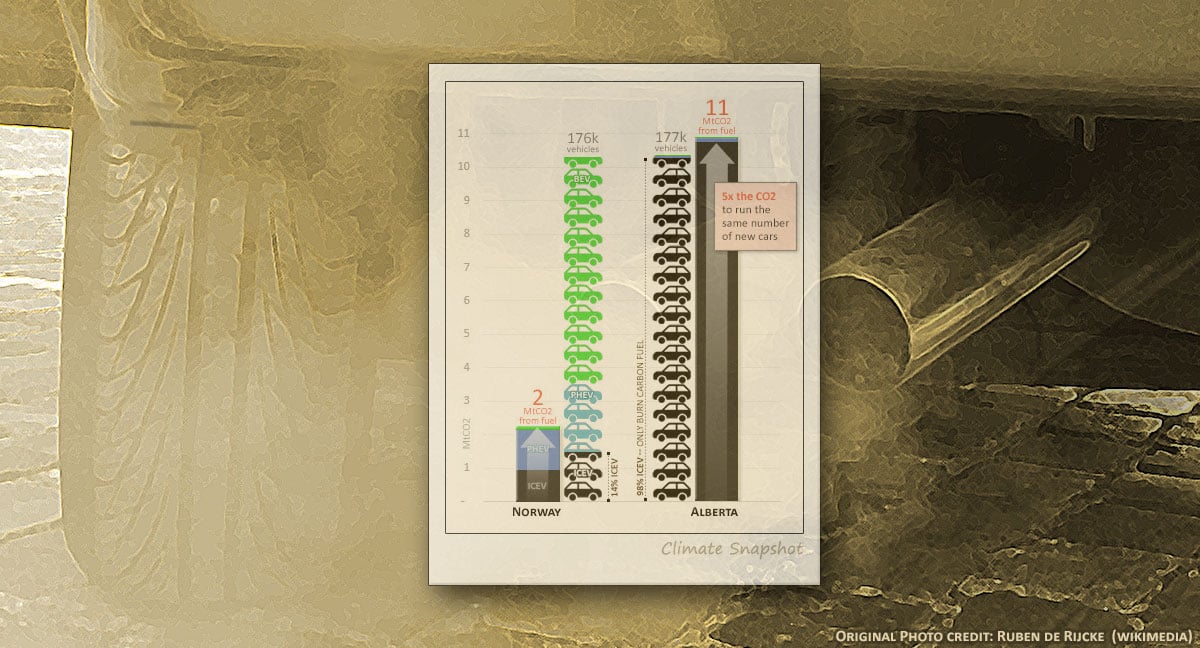 Alberta and Norway have a lot in common. They are both major oil producers, with similar populations and GDP. Both are northern regions with cold, snowy winters. And it turns out, they both buy similar numbers of new passenger vehicles each year.

But Alberta and Norway are climate opposites when it comes to the amount of CO2 their new cars are locking into our future. Take a look.

The number of new passenger vehicles that Albertans and Norwegians bought last year are shown by the car stacks on the chart — around 175,000 each.

The bars next to these car stacks show how much future climate pollution will be emitted from fuelling them over their lifespans.

As you can see, driving Alberta's new cars will dump around 11 million tonnes of CO2 (MtCO2) into the air. That's five times more than the same number of new cars in Norway.

Why are Albertans locking in so much more climate pollution per car? Because 98 per cent of their new cars can only burn carbon fuel. These are shown on the chart by the black car icons. These internal combustion engine vehicles (ICEVs) are the most climate-polluting kind. They emit more CO2 than coal power plants per unit of energy. Making the worst option even worse is the sad fact Canadians buy the world's most climate-polluting versions of ICEVs. Our average new ICEV dumps more than 60 tonnes of CO2 out its tailpipe.

The reason Norwegians' new cars will emit so much less is because they buy very few ICEVs anymore. Instead, Norwegians mostly buy the least climate-polluting option — pure battery electric cars (BEVs). These are shown in green on the chart. BEVs can run on Norway's low-carbon hydropower. As a result, each one will emit only around one tonne of CO2 from using that electricity as fuel over its lifespan. Driving on electricity in Norway emits 50 times less CO2 than burning fossil gasoline.

#Alberta and #Norway have a lot in common. Where they part ways is the amount of emissions they produce from driving. @bsaxifrage crunches the numbers for @natobserver. #EV #ElectricVehicles

To get a visual sense of what 50 times less climate pollution looks like, take a look at the tiny green line at the top of Norway's CO2 bar. That's the CO2 from driving all the green-coloured BEVs stacked next to it.

Norwegians buy fewer climate polluting vehicles because government policies make this the easiest and best economic option for them.

For example, Norway taxes fossil gasoline at a rate equal to $600 per tonne of CO2 emitted. That's $440 more to dump each tonne of climate pollution out your tailpipe in Norway than in Canada. That adds up fast. The owner of an average new Canadian ICEV would pay $25,000 more in gas tax to drive it around in Norway than in Canada. This one policy alone is a far greater economic incentive for Norwegians to switch away from super-polluting ICEVs than all the "EV rebates" and "carbon taxes" offered to Canadians.

Norway's gas tax is a big stick. But they pair it with a generous suite of government "carrot" policies that reward BEVs as well. Together, these policies make it easy for Norwegians to choose the least climate-damaging cars.

If Norway, the biggest oil exporter in Western Europe, has been able to transition its citizens successfully and rapidly into low-emissions new cars, then Alberta and the rest of Canada certainly can, too.

Cars and trucks are not a

Cars and trucks are not a green solution to our transportation needs, no matter what powers them. EVs are not remotely sustainable either.
We need to minimize the role of EVs (private cars) and maximize the role of public transit.

While EVs are far more efficient, and infinitely preferable in terms of air pollution, EVs are not a green solution.
EVs have a huge footprint. Car culture drives urban sprawl. Neither is remotely sustainable.
With their huge footprint, EVs wouldn't be green even if they ran on fairy dust. Much of that footprint is embedded in mining and manufacture of materials. About half of the energy used over the lifespan of a car is expended during its production. Using two tons of metal to transport a 150 lb human being is an ecological non-starter.
Halving our emissions but doubling the number of cars (in developing world) gets us precisely nowhere.
*
Cars drive sprawl, and sprawl drives cars. Sprawl forces people to drive everywhere they go. Once people get in that habit, it's hard to break. Obscene energy expenditure. Lost productivity, sedentary lifestyle (and health problems), millions of deaths and injuries, roadkill, and social isolation. Disintegration of community, loss of green space, endless freeways and traffic jams, inefficient public transit, lost productivity, strip mall blight, mega-mall culture, parking lot proliferation, accidents, and property damage. Insanely long commutes in bumper-to-bumper traffic. Sprawl multiplies congestion, energy consumption and waste, time and productivity loss, emissions, and footprint.

In perpetuating sprawl, EVs exacerbate the problem and obstruct real solutions. A one-Earth footprint cannot accommodate an energy-intensive lifestyle where people drive everywhere they go -- or an urban model relying on millions of cars to transport millions of people.
Sprawl makes efficient public transit impossible. In perpetuating sprawl, EVs obstruct the problem and delay real solutions.
EVs support the unsustainable urban model underlying our high energy/resource consumption. We cannot solve the paradigm problem simply by replacing internal combustion engines with electric motors.
No solution to sprawl except to hit the brakes. The decisions we make now set the blueprint for generations to come.

Switching to EVs replaces one environmental disaster with another.

Have you ever taken transit

Have you ever taken transit at the end of the day, trying to get to where you pick up your kids before it closes?
Or tried to grocery shop with a toddler in a stroller and a younger one on your back?
Or even tried to bring home groceries, with a wheelchair.
Or found you can't walk the distances at either end of the trip, and still be functional?
It's probably a bad idea to have transportation choices mandated by relatively young people, "coupled" parents, men in general (or, God forbid, social workers !!!)
Middle class workers generally have choices open to them, not only in transportation, but many other things as well. Minimum wage shift workers? Not so much.

Or resource extraction employees and contractors: I'm certain anyone in northern BC or Alberta knows people who travel 30, 40 miles or more, for work.

Makes you wonder how mankind

Makes you wonder how mankind survived all these millennia without cars.

Have you ever taken your car at the end of the day, trying to get to where you pick up your kids before it closes — and been stuck in a traffic jam? Or been hit by a distracted or drunk driver?

The premise of a city reliant on public transit is smart urban design. Living near where you work and play, with amenities like daycare and school close by.
Public transit services exist for the handicapped and wheelchair-bound.
As for people who use use of their limbs but who can't walk long distances — how did they get that way? Not from an active lifestyle, but from being sedentary. Use it or lose it.
As for resource extraction employees, we already have on-site housing for remote locations. Also buses ferrying workers from nearby towns.

Ecologically, the idea that billions of people will use private vehicles is a non-starter. Such a system will never be sustainable.

This site says that Americans

This site says that Americans (..sometimes used as a derogatory term for Albertans :), drive an average of 21,687 km per year.. while Norwegians drove an average of 12,289 km per year (in 2015). I don't know if the author's findings took this into consideration. Also, Alberta and Norway may both be 'cold', but it seems to me that Calgary and Edmonton can both be quite a bit colder in winter than Oslo.. I don't know if that would affect consumer preferences.