Jason Kenney was out first thing in the morning promoting Alberta oil and gas. Meanwhile, his “War Room” (a.k.a. the Canadian Energy Centre) proclaimed “more than a decade of Canada being handicapped in its ability to get oil and gas to global markets has contributed to the situation.”

At the federal level, Pierre Poilievre rushed to call for fast-tracking liquefied natural gas. The National Post ran headlines like “How Canada can keep Europe’s lights on: sending troops is important. Sending natural gas could have a bigger impact.”

The chambers of social media echoed with posts from the Canadian Association of Petroleum Producers, its front groups, Canada Proud and others mirroring the American Petroleum Institute’s appeals to resurrect Keystone XL. Online fossil influencers piled in: Vivian Krause, the “foreign funded radicals” theorist, managed to torque images of Ukrainian civilians filling up their cars into a call for more Canadian pipelines.

How fast can we build a pipeline?

It shouldn’t take a war to finally get going on a pipeline to the east. But here we are … https://t.co/hdA3pQIClv

Their answer to generations of oil-fuelled wars is apparently to entrench dependence on fossil fuels even more deeply, building high-carbon infrastructure that would lock in fossil fuels beyond mid-century and driving us even faster into an era of climate conflicts.

Thankfully, there are voices of sanity pushing in the other direction. The Russian invasion has catalyzed the Europeans to roll out a new energy independence strategy “doubling down” on renewables, accelerating the drive to upgrade buildings, making the switch from gas to heat pumps and electrifying transportation.

None of this can happen in time to relieve Europe’s dependence on Russian energy at the speed of Russia’s latest aggression. But neither can a buildout of new fossil infrastructure. In fact, renewables are much more nimble (European wind farms are being deployed in less than two years) and have stunning tailwinds in terms of cost. The chart below looks very similar for wind power and batteries.

The western oil industry has played a pivotal role creating the current crisis over Russian energy. Big Oil’s machinations go back decades. It was a lobby led by Exxon that thwarted Ronald Reagan’s efforts to stop pipelines from the Soviet Union into Western Europe. The big oil companies wanted in on the action, no matter the partner.

And their partnering continued on into this millennium. Exxon CEO Rex Tillerson was personally awarded one of Russia’s highest honours, the Order of Friendship, by Putin in 2013. Although diminished, Exxon still has operations in Russia today. 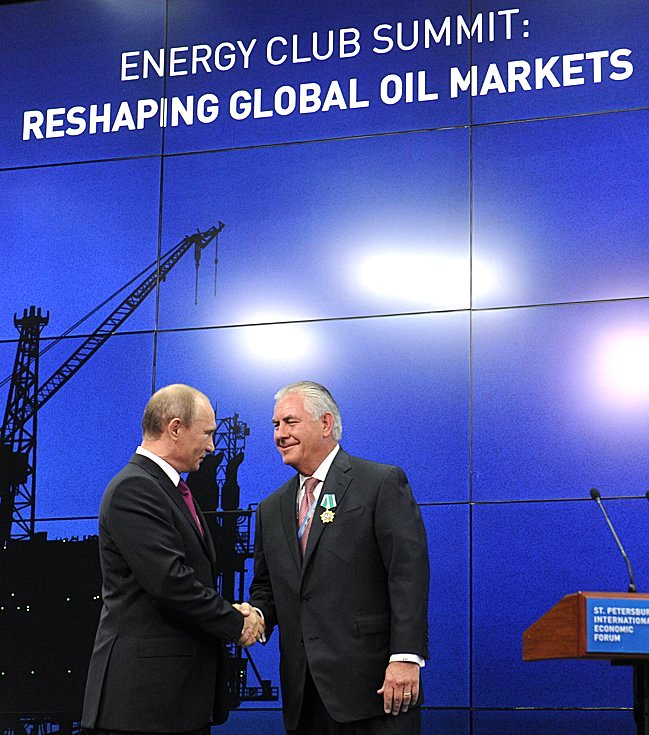 Exxon operates in Canada mostly as Imperial Oil and their partnership with the Russian state oil company even brought Rosneft into the Alberta oilsands. The explicit goal was to transfer technological know-how so Russia could take advantage of new technologies to boost its industry (and the Kremlin’s coffers) back home.

In 2012, Claudia Cattaneo, writing in the Financial Post, described Rosneft’s arrival in Canada as a “landmark alliance” and the focus of a ”new oil age.” Putin launched his first invasion of Ukraine and annexed Crimea two years later.

It’s worth circling back to the time of Reagan, not just for the “what ifs” about Russian pipelines. When Reagan beat Jimmy Carter, he made a theatrical move on the White House that reverberates to this day. Reagan tore down the solar hot-water panels Carter had installed in response to the energy crises of the 1970s.

The oil embargoes and price shocks of the ’70s catalyzed important initiatives to break our addiction to fossil fuels, not just in North America but in countries around the world. Sweden moved on home heating, Brazil went to sugarcane fuel for vehicles, France went nuclear.

The momentum stalled but many of those early initiatives still stand as functioning proof an energy transition is possible. And many places around the world picked up the baton in the 1990s, or more recently, demonstrating the way forward.

To remind ourselves of the path still available to us now, let’s take a quick trip back to the unveiling of those solar panels on the White House in 1979. Here’s what Carter had to say:

“In the year 2000, this solar water heater behind me, which is being dedicated today, will still be here supplying cheap, efficient energy… A generation from now, this solar heater can either be a curiosity, a museum piece, an example of a road not taken, or it can be just a small part of one of the greatest and most exciting adventures ever undertaken.”

We can only wish that momentum had carried on. So many lives and so much destruction might have been avoided. Today, armed with ever cheaper clean energy, the overwhelming science of climate change, and the lessons of history, we need not repeat the same mistakes.

Shareholders at RBC will vote on a resolution to stop greenwashing at this April’s annual meeting. Investors for Paris Compliance filed the resolution after RBC gave Enbridge $1.1 billion worth of “sustainable financing” even though the company had no intention of directing the funds to environmental initiatives. 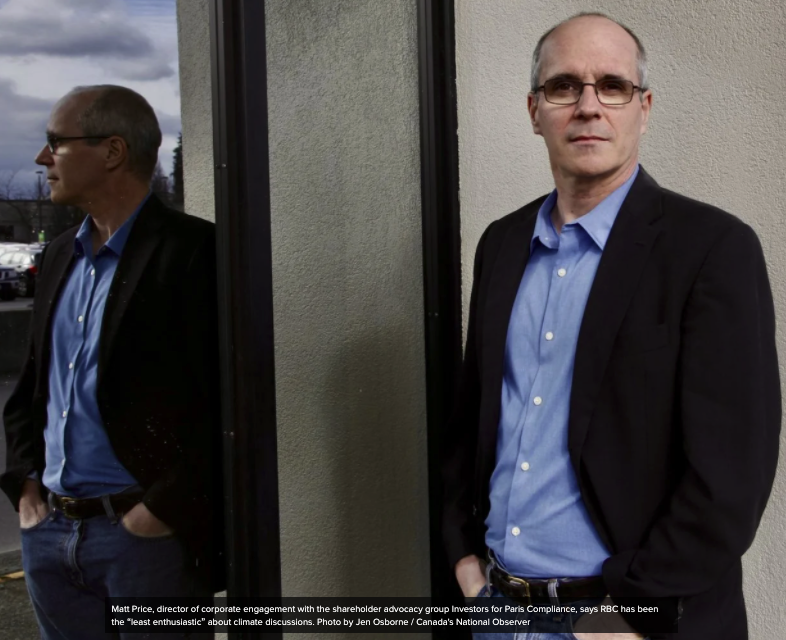 In related news, youth activists with Banking on a Better Future are also targeting Canada’s big banks. John Woodside reports the groups involved are calling out the banks’ use of “strategic philanthropy to paper over growing climate concerns in an attempt to lock-in young customers for life.”

“We've noticed this is a way to draw young people in and to appeal to us, (but) obviously their fossil fuel funding doesn't appeal to us,” said Aliya Hirji, a 17-year-old climate organizer with Banking on a Better Future.

“They're making this money off of destroying our future and then putting it into a mental health campaign that I only need to access because I have eco-anxiety.”

The global energy sector is dramatically underreporting the amount of methane it releases. The International Energy Agency found that actual emissions are about 70 per cent higher than reported in official data.

According to other reports, methane emissions in Canada may be twice as much as reported.

Canada’s Ministry of Environment and Climate Change confirmed to Natasha Bulowski that it understands the problem and will update future reporting:

These improved estimations “will result in an upward revision in methane emissions reported in Canada’s 2022 national inventory and will include updated emissions for 1990 to 2020,” said a ministry spokesperson.

A couple of weeks ago, we looked at the PaRx program, which allows doctors to prescribe time in nature (the evidence shows benefits above two hours a week, 20 minutes a day).

Apparently the auto industry has been paying attention. Get a load of this paid sponsorship article in the BBC:

On the topic of cars, you will have heard about the stunning progress Norway is making on EVs. Barry Saxifrage did a comparison of Norway and Alberta — similar number of people, similar GDP, both major oil and gas producers in cold climates.

Turns out, both jurisdictions have about the same number of car sales each year, too. But new cars in Alberta lock in 11 million tonnes of CO2. In Norway, the number is two million tonnes. 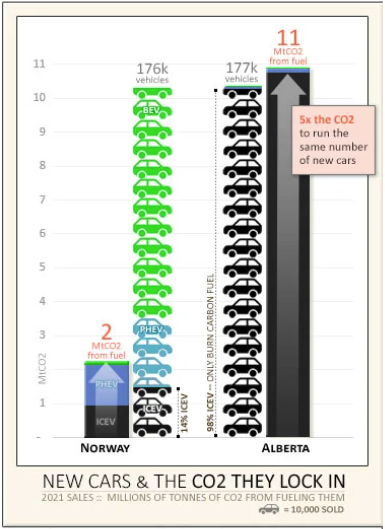 For more on EVs, check out Max Fawcett’s Your next car will be electric. Why did it take so long? Few companies “have been as transparently or unapologetically obstructionist here as Toyota,” Max writes. “Despite developing some of the earliest electric vehicle technology, it has consistently stood in the way of efforts to support the electrification of more vehicles.”

Last week, we looked at plans for greener steel at AreclorMittal’s Dofasco plant in Hamilton. Dofasco will replace its coal-fired blast furnaces with electric ones. This week, the company announced it’s taking the next big step at its Spanish operation — buying green hydrogen to eliminate the carbon dioxide emissions from separating iron oxide into usable iron.

“HyDeal España … will use 9.5GW of solar energy to power 7.4GW of electrolysers that will split water molecules into hydrogen and oxygen. And the 330,000 tonnes of H2 produced each year will be supplied to a new industrial hub in the Asturias region, northern Spain, and bought by ArcelorMittal and Fertiberia,” reports Recharge News.

Fertiberia is a fertilizer company — another sector with enormous implications for Canadian industrial emissions.

Reuters reports: “That easily topped the U.S. offshore wind auction record of $405 million set in 2018. It was also far more than recent oil and gas auctions in U.S. federal waters. A sale of drilling rights in the Gulf of Mexico late last year, for instance, attracted $191.7 million in high bids.”

Washington Post: EU will unveil a strategy to break free from Russian gas, after decades of dependence: Ukraine crisis has pushed Europe toward renewables — but will the change come quickly enough?