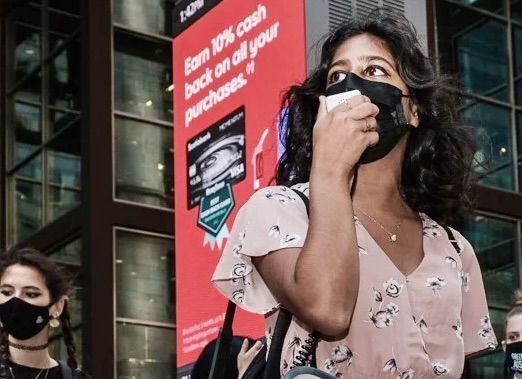 Canadian banks are using “strategic philanthropy” to paper over growing climate concerns in an attempt to lock in young customers for life.

A new report published Thursday by Greenpeace Canada and Banking on a Better Future examines charitable donations given out by major Canadian banks in the context of reputational risks posed by fossil fuel investments.

The groups behind the report are accusing the banks of using charitable donations to boost their public image while quietly pumping billions of dollars into the fossil fuel sector. It’s a tactic the groups say was pioneered by Big Tobacco, referencing cigarette giant Philip Morris that over 20 years ago spent more advertising its charitable donations than the donations were actually worth.

At the centre of the report is an important observation about banks’ business models: Once someone signs up with a bank, they’re likely to stay with that bank for the rest of their life. Relatedly, the report notes for customers who do switch banks, the highest rate is among 18 to 34 year olds.

“Youth targeting drives customer conversion in a segment with limited opportunity later in life for turnover,” a report from WARC, cited in the study, reads. “Getting to students before they open their first adult bank account is key as, once they’re signed up, they’re often reluctant to switch due to the perceived hassle.”

This is why banks are so eager to snare young people as they enter adulthood and the financial independence that comes with it.

One way banks promote themselves is through sponsorship. The report highlights a number of philanthropic activities, including RBC handing out $130 million to almost 5,000 charitable organizations in 2019 and TD donating over $100 million to more than 28,000 environmental organizations since 1990.

“We've noticed this is a way to draw young people in and to appeal to us, (but) obviously their fossil fuel funding doesn't appeal to us,” said Aliya Hirji, a 17-year-old climate organizer with Banking on a Better Future.

“They're making this money off of destroying our future and then putting it into a mental health campaign that I only need to access because I have eco-anxiety,” she said.

The banks are making "money off of destroying our future and then putting it into a mental health campaign that I only need to access because I have eco-anxiety," says @bank4future organizer @aliya_hirji_. #cdnpoli

Hirji said it’s not just the anxiety that comes from thinking about the future — which failing immediate action, looks to be defined by climate breakdown — it’s fear and grief, too.

“Dealing with the fear of climate change also can lead to heightened risks of depression, or for anybody already grappling with a physical or mental illness, it often exacerbates that,” she said.

“But I think fear is sometimes important. It sounds funny, but I like to call it a healthy fear,” she said. “Enough to be motivated to do something and take action.”

For charitable spending, the report calculated RBC donated $130 million globally in 2019, TD donated at least $130 million (although some sports and other sponsorship figures couldn’t be calculated), and CIBC donated just over $6 million in Canada in 2019. Figures for BMO and Scotiabank were not included.

The Greenpeace and Banking on a Better Future report outlines how banks understand the growing reputational risks that come from continued investment in fossil fuels as younger customers grow more concerned about the planet’s future.

TD has warned its shareholders that there are people and organizations “actively against continued fossil fuel energy resource development and use and are prepared to take action against TD for our involvement in financing those businesses.” CIBC has said its reputation could be jeopardized from its “association with traditionally high carbon-emitting sectors,” and Scotiabank has said, “reputational risks could arise if the bank does not make meaningful and transparent commitments to address climate change.”

To protect their reputations, the report calls on banks to align their investments with credible net-zero goals. As members of the Glasgow Financial Alliance for Net Zero, Canada’s largest banks have committed to aligning their financing with pathways to net-zero by 2050, or sooner. As part of that commitment, the banks must submit 2030 targets by April 2023.

The report says the banks should immediately phase out financing for thermal coal projects, and develop plans to phase out money for oil and gas. Relatedly, the report urges banks to incorporate the International Energy Agency’s net-zero conclusion that there can be no new fossil fuel developments anywhere in the world while staying onside with the Paris Agreement goal of holding global warming to 1.5 C.

That polling data, which

The other problem being that they're run by very, very rich people. Illustration, Monty Python's "Merchant Banker" sketch:
https://www.dailymotion.com/video/x2hwql1

My Credit Union is run by elected people; they are mostly upper middle class, some middle class, none really rich. Mostly progressive-minded. It makes a difference. Banks are a significant part of modern society's problems. Switching to credit unions is a tiny step in the right direction. Plus they are slightly less likely to scam you.

The way to the banks heart is

The way to the banks heart is to compete against them with the creation of say the (Environmental Bank of Canada) see how much power and financial control you can pull away from the big banks of Canada and other nations. That my friends is the only way to really get this accomplished.