The truth, the whole truth? It’s nothing but a ‘glossy brochure’

You don’t often hear the words “climate change” from Pierre Poilievre’s mouth, especially not without a sneer in his voice and a knowing, snarky eyebrow raised to the base. But it happened during his Conservative leadership victory speech — Poilievre announced he would “fight climate change with technology, not with taxes.”

It’s a safe bet Poilievre wouldn’t only axe the carbon tax. Pollution pricing is simply the most flammable symbol of climate action in general. Poilievre’s campaign platform didn’t address climate change even once, but his rousing pledge of new pipelines “south, north, east and west” tells you all you need to know about his direction on fossil fuels.

And we’ve seen this play out before, in Alberta and Ontario. Doug Ford immediately junked all climate policy, including Ontario’s cap-and-trade program, and cancelled over 700 renewable energy projects.

What did Ontario get instead? A “glossy brochure,” apparently. That’s what the Ford government argued in court this week. Seven young people are suing the provincial government for breaching their charter rights with the Cap and Trade Cancellation Act.

One of the things that act did was to replace Ontario’s carbon cuts with much gentler ones. The Ford government went to court itself, claiming all the way to the Supreme Court that the new law was solid and binding enough to make federal carbon pricing unnecessary and illegal.

But now, facing the young people in court, Ontario says its climate plan is merely a communications exercise, a “glossy brochure,” certainly “not a law that authorizes, permits, prohibits or requires” anything. 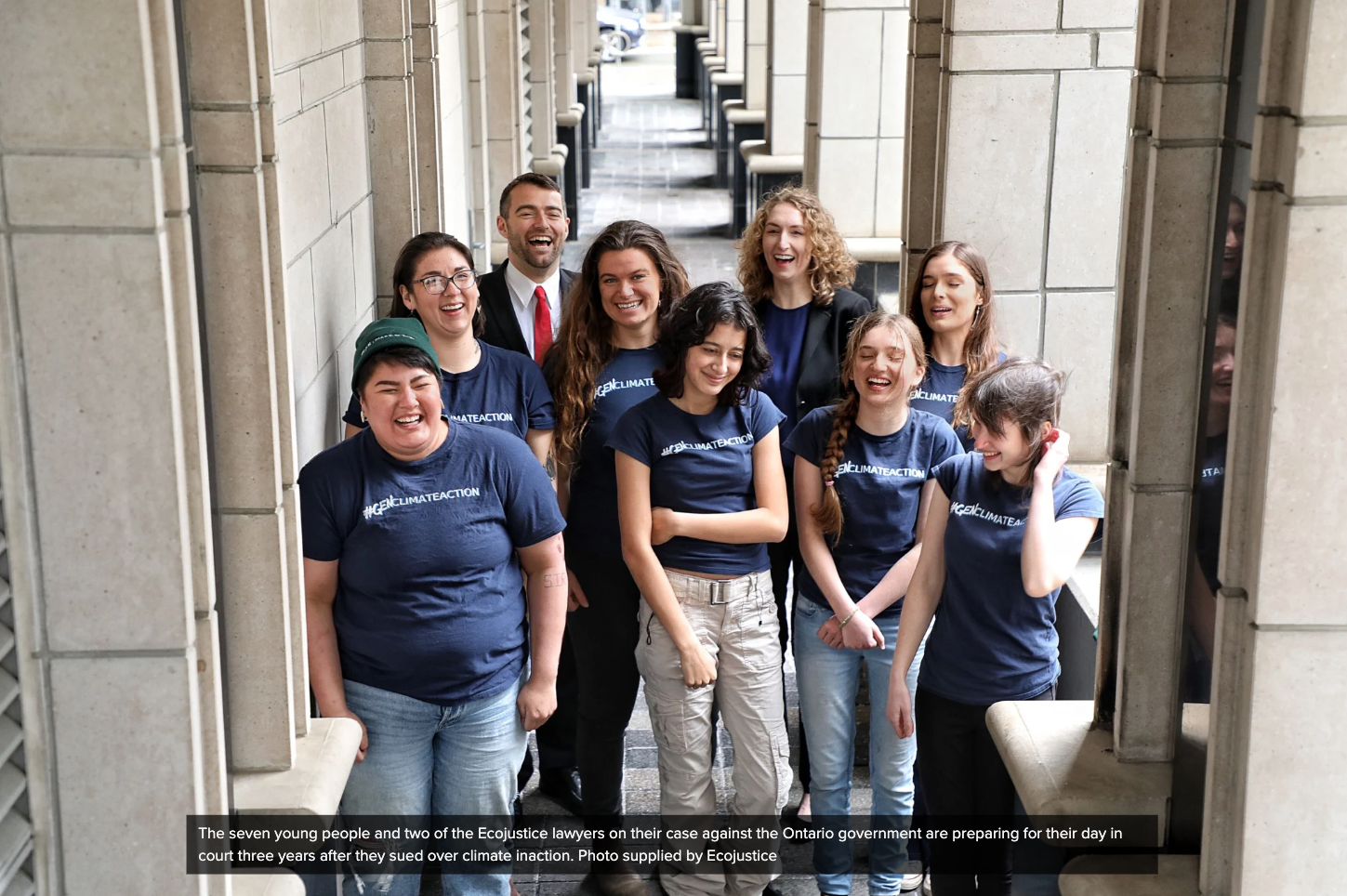 Canada’s big oil companies are now pressing for a glossy brochure approach from the feds as well. Promising greenhouse gas reductions and setting net-zero targets landed them billions in federal subsidies for their favoured technologies. But, heaven forbid such promises should actually be binding.

The big players like Suncor, CNRL and Imperial Oil, are using front groups to stop the feds from placing a cap on emissions (tip of the hat to Keith Stewart for highlighting Big Oil’s tactical pivot).

The main oil and gas lobby group they fund is CAPP (the Canadian Association of Petroleum Producers) and it has launched a campaign for “Energy Citizens” to pressure Ottawa to kill the proposed emissions cap.

The appeal for voluntary measures, incentives and technology instead of laws isn’t new to Canada but there has been a major shift in the landscape favouring these arguments from the Convoy Party of Canada and CAPP — the American approach.

Conservative political strategists are eagerly pointing to the U.S. Inflation Reduction Act, which is big on carrots and light on sticks.

It’s not as if the Biden administration doesn’t know the jurisdictions actually cutting climate pollution are using stiff sticks: they have “a high number of energy and climate policies in place,” as researchers phrase it.

But Biden’s team was stymied in most efforts at legally binding carbon cuts. Democrats simply couldn’t get fellow Sen. Joe Manchin and Sen. Kyrsten Sinema on board. And so, faced with unanimous Republican opposition, political math required abandoning the sticks, and the big U.S. climate bill relies mainly on carrots.

Even so, as strategists correctly point out, the carrot-filled bill is widely supported by climate hawks. In part, this is simply because the U.S. finally passed significant, nationwide climate legislation — celebrate the win and keep moving forward.

But the other reason is the mouth-watering mountain of carrots. Almost $400-billion in the act alone, on top of other climate spending the Biden administration had already rolled out.

Poilievre wants to scrap the carbon tax & focus on carbon tech. After all, Biden didn't do a carbon tax, he's spending US$700 billion.
Will Poilievre commit to a proportional spend of CAD$92 billion?
& b/c he'll cut a $ for every $ of new spending, what wld he cut to pay for it?

Conservatives facing suburban voters will be keen to make the case that carbon pricing shouldn’t be a litmus test of whether they’re serious about climate change. “Technology, not taxes” may be a line we hear a lot more often, buttressed by comparisons to the American approach. But with a leader so adamant about cutting government spending, it’s a recipe for more glossy brochures.

The World Health Organization and over 200 other medical associations endorsed a Fossil Fuel Non-Proliferation Treaty. In addition to the deaths and health impacts from climate change, the organizations say phasing out fossil fuels could prevent 3.6 million deaths per year from air pollution.

“The modern addiction to fossil fuels is not just an act of environmental vandalism. From the health perspective, it is an act of self-sabotage,” said WHO Director-General Dr. Tedros Adhanom Ghebreyesus.

Patagonia donated itself to climate solutions. The company’s founder, Yvon Chouinard, closed the company’s stores for an all-hands video call and announced the $4-billion company was being converted into a trust and non-profit, with profits now going to environmental advocacy.

“Earth is now our only shareholder,” declared Chouinard.

The feds can tackle affordability and climate change at the same time, Steven Guilbeault told Natasha Bulowski this week. The next day, Guilbeault announced $250 million to make home heating greener and more affordable. Nearly half the money will be allocated to Atlantic Canada, where one-third of homes still use oil for heating.

Switching to renewables will save trillions, shows a new report from Oxford University.

"Even if you're a climate denier, you should be on board,” one of the researchers told the BBC. The study found a switch from fossil fuels to renewables is not only feasible but would save the world at least $12 trillion by 2050.

Belgium got the message. Thousands of low-income households will be part of a 400,000 solar panel project on rooftops to relieve energy bills, reports Euronews.

The EU unveiled a plan to cap revenues of electricity companies and redirect their “extraordinary profits” to help people hit by energy prices.

A heavy order for heavy trucks. The Mississauga-based trucking company Pride Group just ordered 250 heavy-duty electric trucks from Freightliner. Pride already has 6,720 (!) electric trucks on order and plans to have a fully electrified fleet for local delivery within a couple of years, reports Electric Autonomy Canada.

Sam Johal, president of Pride EV, says, “These units easily manage 10- to 14-hour trips — a regular driving day. This not only supports our drivers through quiet and comfortable vehicle operations but also brings us closer to our zero-emission transportation goal.”

Canada’s only underground coal mine is back in business — and emissions rules don’t apply. Cloe Logan has been investigating the reopening of the Donkin mine in Cape Breton, which was closed after more than a dozen roof cave-ins, 152 warnings, 119 compliance orders and a series of stop-work orders.

“How dare they pollute us like that, how dare they poison the air further, poison the water,” says Elizabeth Marshall, a Mi’kmaq Grandmother, member of the nearby Eskasoni First Nation and the Mi’kmaq Warrior Society.

A dangerous time for Russian “oiligarchs.” Energy exec Ivan Pechorin died after he fell off his boat in the Sea of Japan. His body washed up near Vladivostok where he’d been at an economic conference with Vladimir Putin. Pechorin’s former boss also died suddenly back in February, aged 43. Pechorin is the 12th oligarch this year to die mysteriously, most of them oil and gas executives falling from windows and cliffs or committing suicide with multiple gunshots to the head.

Poilievre’s next move will be an attack on ESG and “woke capital,” predicts Max Fawcett, coiner of the “Convoy Party of Canada” moniker. Max also warned that Poilievre's war on the media has only just begun.

The very next day, Poilievre proved him right: “Who the hell calls a press conference, then tells reporters they can’t ask questions?” asks Karyn Pugliese.

If you missed the news, Karyn is now executive editor of Canada's National Observer. She’s a member of the Algonquins of Pikwakanagan First Nation in Ontario and was managing editor of investigations at CBC and, previously, the executive director of news and current affairs at the Aboriginal Peoples Television Network (APTN).

Public concern is rising on both sides of the border. Pollster Mario Canseco just repeated a cross-border poll and found more Canadians and Americans feel climate change is a “major crisis” than two years ago. Up six per cent among Canadians (now 68 per cent) and up nine per cent among Americans.

I’ll leave you this week with a suggestion for a truly bizarre read. Douglas Rushkoff, an early cyberpunk, a professor at City University of New York and a winner of the Marshall McLuhan Award is known for everything from documentaries to graphic novels. Somehow, he got himself invited inside the lair of the one percentiest to refine their plans to leave the rest of us behind.

Survival of the Richest: Escape Fantasies of the Tech Billionaires is his new book, based on an earlier essay by the same name.

“They started out innocuously enough. Ethereum or bitcoin? Is quantum computing a real thing? Slowly but surely, however, they edged into their real topics of concern.

“Which region will be less impacted by the coming climate crisis: New Zealand or Alaska? Is Google really building Ray Kurzweil a home for his brain, and will his consciousness live through the transition, or will it die and be reborn as a whole new one? Finally, the CEO of a brokerage house explained that he had nearly completed building his own underground bunker system and asked, “How do I maintain authority over my security force after the event?”