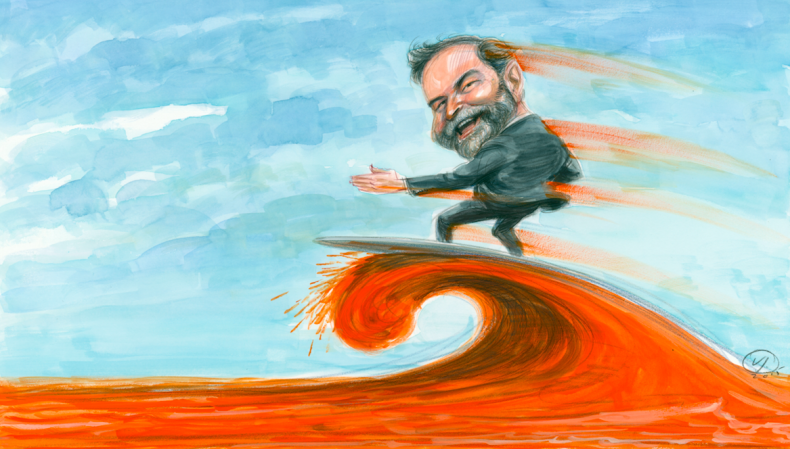 He's popular, but can Mulcair ride the wave to victory on his environmental position? Illustration by Victor Juhasz for National Observer
Previous story
Next story

In comments made to the National Observer after the first leader’s debate on Aug. 6 in Canada's 2015 federal election, Thomas Mulcair vowed to tackle Canada’s greenhouse gas emissions.

“I look forward to getting Canada on track. I want us to start working with the world and stop working against the planet," said Mulcair.

During the debate, his stance on pipelines and supertankers was questioned by both Justin Trudeau and Green Party leader Elizabeth May.

Mulcair stressed the need for proper consultation and study before accepting or rejecting major energy projects, and slammed Prime Minister Stephen Harper for hurting Canada by making the oil sands a “scapegoat” for climate change.

Other opposition leaders piled on, blasting Harper's assertion that the Tory government had managed to both grow Canada’s economy and cut emissions at the same time.

In March, the NDP leader stated that he “would love nothing more” than to make attendance at the Conference of Parties (COP) 21 climate change talks in Paris this November his first act as prime minister— but like his Liberal counterpart Justin Trudeau, Mulcair has not said whether or not he would attend COP-21 with a concrete emissions reduction target in hand.

Mulcair’s post-debate comments on addressing climate change come on the heels of President Obama’s Clean Power Plan announcement, which commits the U.S. to cutting power plant emissions 32 per cent on 2005 levels by 2030— as well as greater investment in renewable energy sources such as solar and wind power.

"It’s encouraging that Mr. Obama is now putting these ideas forward,” said Mulcair after the debate. “I expect to be able to work with them and a lot of other partners to come to grips with the very real challenge that is greenhouse gas increases around the world and the climate change that it is causing.”

Looking to the future, Mulcair said that an NDP government would develop renewable energy sources and be part of a global clean-tech market that he said will be worth $3 trillion by 2020.

“We’re a laggard on the world stage,” said Mulcair during the debate.

NDP industry critic Peggy Nash, speaking to the National Observer earlier on Aug. 7, said that the NDP were committed to “hard caps” on emissions and introducing a cap-and-trade program, but said that the level of emissions cuts would be revealed in the NDP’s full environmental platform.

“Our goal is to transition to greater energy efficiency and to greater reliance on renewables, but in the meantime obviously we still have fossil fuels that we’re relying on to a large extent,” Nash said.

“Part of our plan is to have a more balanced development and to process as much as we can domestically, so that we are maximizing any benefit that we get from non-renewable resources.”

She said that Canada’s goal should be similar to the US, which is shifting towards a more balanced, energy-efficient, and renewables-friendly approach.

“Rather than denying that climate [change] exists, we will want to engage with the world and be a positive player to do our part in reducing greenhouse gas emissions. We will definitely be [at Paris] and be playing a constructive role,” said Nash.

She pointed to past NDP successes in environmental protection, such as the recently-passed bill to ban the polluting plastic microbeads in toothpaste and other products, as well as her ongoing battle to help restore protections to the Humber River that borders her riding of Parkdale-High Park in Toronto.

Nash has also introduced a bill to create a national cycling infrastructure to wean people off cars, which is already taking shape at a municipal level, an example being Calgary’s cycling tracks that were installed starting in May and its 800 km-long network of pathways across the city.

Asked when the NDP would release its complete environmental platform, Mulcair’s executive and media assistant George Smith would only say, “Stay tuned.”

As Mulcair discussed future plans for Canada, Stephen Harper was nowhere to be seen after the debate.

It was initially suggested that Kory Teneycke, the PM’s spokesperson and former vice-president of Sun News Network, would field media questions in the post-debate scrum in place of Harper.

But journalists were informed by organizers that no Tory representative would be in attendance only minutes before the scrum began.

Earlier that evening, journalists wishing to enter the OMNI TV building in Toronto where the debate was being hosted had their equipment searched by police, who used a sniffer dog and a bomb detector device.

This was in keeping with earlier appearances by the PM, where media were subject to security searches and had limited or no opportunity to ask questions of Prime Minister Harper.

At a previous appearance in Toronto on June 18, where Harper announced SmartTrack transit funding together with Mayor John Tory, journalists wishing to ask the PM questions had their queries pre-screened by staffers.

This was presumably to prevent inconvenient questions, such as Harper's handling of allegations that Senator Don Meredith had inappropriate relations with a teenage girl, reports of which broke the previous day.