Breakout performance by May counts as a win for Harper 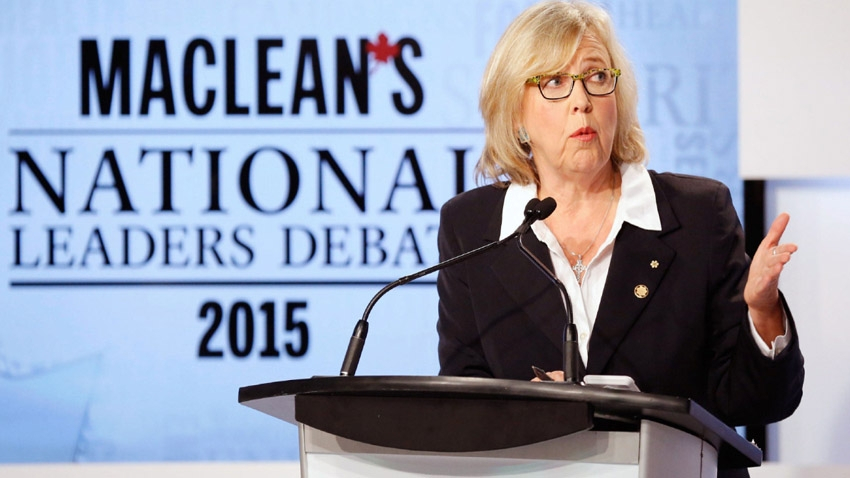 Elizabeth May photo by Canadian Press
Previous story
Next story

Last night may have been Elizabeth May’s Rachel Notley moment. Voters love debate surprises and reward character and courage. Maybe because they see them so rarely.

May will probably never be more than an occasional guest at 24 Sussex, but last night’s debate belonged to her, and re-shuffled the deck for #elxn42.

Consider for a moment the money and talent that assembled in the Conservative, NDP and Liberal camps to prepare each of their respective leaders for this debate. Think of the focus-grouping, the research, the polling, the role-playing and dry runs each team and leader has undertaken.

Now imagine Elizabeth May, the solitary MP leading a party bereft of resources and electoral experience anywhere. How did she prepare? With Google and a bathroom mirror?

Yet there was the leader of the Green Party, addressing the economy, national security, and constitutional law with inspired mastery. Canadians across the country sat up and took notice as she articulated the most confident challenge that Stephen Harper has yet faced in Canada's 2015 federal election.

Everyone saw the same thing: if she were the Liberal or NDP leader, Elizabeth May would probably be the next prime minister of Canada.

May had one blessing: she had nothing to lose and was in nobody’s crosshairs. She made the most of it, delivering a breakout performance. Her message will resonate with voters across the spectrum, and they’ll want to see a lot more of it. Watch especially for a move in her direction by women voters, who’ll respond to her fearless and informed intelligence.

We will likely also see Canadian women, including this writer, call for hosts to find room for May at future debates.

Justin Trudeau also had a good night. It doesn’t do him justice to attribute his success to exceeding low expectations. Canadians are accustomed to intellectual dominance from both Harper and Mulcair. For Trudeau to hold one’s own in that company, and occasionally surpass it is no small feat.

He still has far to go to recover ground lost in the NDP surge, but Trudeau's in the game.

Debates are about emotion

Much as we might like to imagine differently, election debates aren’t all that much about issues. Rather, they let voters take the measure of candidates' nature and temperament. The purpose of a debate is for the candidate to inspire confidence.

To a remarkable extent, the public tunes out noisy details of policy minutiae, concentrating instead on non-verbal cues such as tone, expression and body language. Voters engage with debates primarily at a visceral and emotional level.

In that respect, the debate was least kind to Tom Mulcair of the NDP. His palpable struggle to project an appealing persona telegraphed dissatisfaction with his own. Who kidnapped the NDP's tough inquisitor and substituted this guy?

Mulcair's performance brought to mind the genius of Kennedy's attack on Nixon: "Would you buy a used car from this man?" Debates are about trust. They're not a time for a switcheroo.

Harper didn't have a great night, but didn't need one. To voters accustomed to a distant, imperious presence, he looked both more human and mortal. His repeated entreaties that the economy is wonderful rang false. But they were convincing enough for the true believers the Conservatives' strategy depends on.

Whether the Maclean's debate will amount to a hill of beans is anybody’s guess, but with voters on the move, this may be a zeitgeist moment. Watch for the Orange Wave to crest, and momentum to shift in May and Trudeau’s direction.

The question is whether an unintended consequence of any vote migration will be to keep Stephen Harper in office for another term.

May is unlikely to pick up more MPs in this election, but a mere 200 votes in her favour in a handful of ridings could hand those seats to Conservative candidates. It’s doubtful any party has a crack at majority territory.

Vote-splitting is the prime minister’s friend. To that extent, Thursday’s debate enters the win column for Harper, and a loss for centre-progressives seeking a clear path to victory.