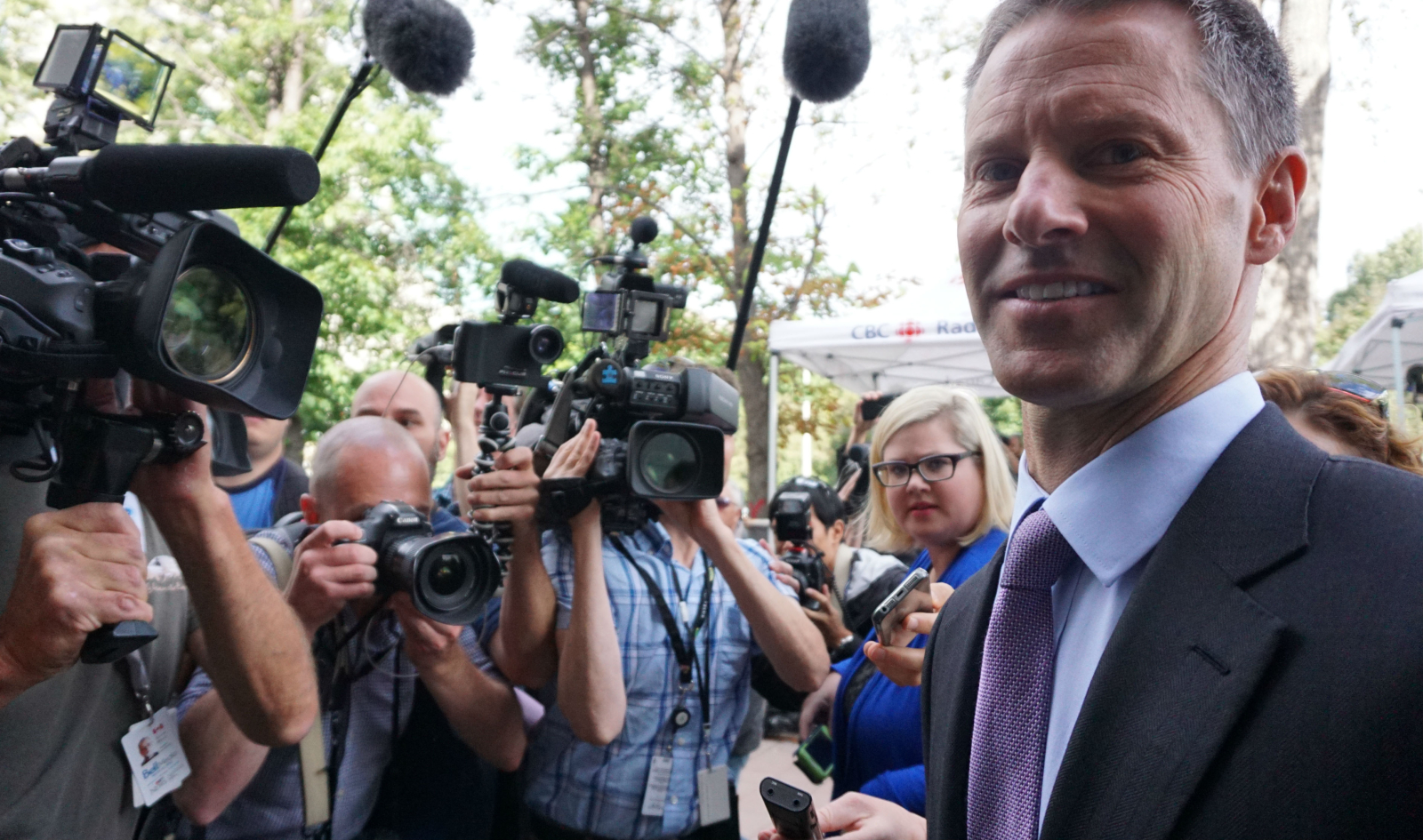 Nigel Wright outside the Ottawa Courtroom, minutes before meeting Bayne in the witness box. Photo by Elizabeth McSheffrey.
Previous story
Next story

Eschewing the rote introductory pleasantries lawyers use to anesthetize witnesses, Bayne commenced his surgical cross-examination with dispatch and a hacksaw. Within minutes Wright's calm self-assurance gave way to an expression of consternation. With few moments of light-hearted relief, his furrowed brow remained fixedly in place for the rest of the day.

It was remarkable to see how quickly and effectively Bayne got under Wright’s skin.

On Wednesday, under friendly questioning by the prosecution, Nigel Wright cut a dashing figure in the witness stand. Expansively generous to Duffy, he allowed (and still does) that the senator had a good argument that he was legally entitled to the residence allowance he’d claimed. But Duffy’s technical entitlement was outweighed by moral considerations, and out of principle, Wright and the prime minister both insisted the funds be repaid.

"I saw it this way,” said Wright in testimony Wednesday, "I had a caucus member I was pressuring to repay expenses that he thought he was legally entitled to. I thought he had potential claim. By virtue of being a team player, he was taking on expenses that he didn’t think he legally owed.” Out of regard for Duffy, Wright unsuccessfully attempted to work out a deal with the Conservative Fund, the financial arm of the Conservative Party of Canada. When that avenue was closed off, Wright wrote the cheque himself.

Wright, a wealthy man, delivered this tale with composure and sangfroid. In Nigel’s world, writing a $90,000 cheque to a senator in need falls into the same category as taking young Conservative interns to lunch. Just one of those things one does for the less fortunate.

In what may turn out to be this trial's jump-the-shark moment, Wright averred that he kept his generosity quiet out of religious principle, citing two verses of scripture of Matthew 6,

"Take care not to do your good deeds publicly or before men,"

"But when you give to charity, do not let your left hand know what your right hand is doing.”

All of this was a little rich for Bayne, who clearly had other ideas than to indulge biblical excuses for crossing palms with 90,000 pieces of silver.

He confronted Wright with a statement by Conservative Party lawyer Arthur Hamilton, who told police that Wright had been scarred as a young Conservative by his experience of scandal in the Mulroney government. Wanting to do everything in his power to prevent a replay, Harper's right hand man apparently told Hamilton that he’d paid Duffy because "We can’t lose a caucus member. The minute that happens you’re in trouble. We can’t let a scandal break. Mulroney never got it back on track (after that)."

And Bayne served notice early that by the end of his cross-examination, Nigel Wright, the PMO, and a conscription of senior senators would be exposed. Functioning as anything but public servants guided by concern for the public interest, Bayne argued, as a group they were driven by the sole objective of insulating Stephen Harper and the Conservative Party from political damage.

Touching on the themes Bayne will put to the witness in the coming days, he referenced Wright’s true role as the prime minister’s chief political guardian. Pointing to the gathering storm of negative publicity surrounding Duffy in early 2013, Bayne drew from Wright his responsibility to brief the prime minister daily on all matters of political concern. He touched on Wright's close association with the taxpayer-subsidized Conservative Fund; his improper use of Conservative Party back-channels to gain advance confidential information about Deloitte’s audit of Duffy, and to doctor its outcome; and finally, Wright’s editing and dictation of the language of Senate sub-committees. Of which a great deal more will be heard.

All these steps were taken, according to Bayne, not from high-minded concern for the public purse, but to save the political hide of Stephen Harper.

More pain lies ahead. Bayne is masterfully playing not only to the judge in front of him but to the gallery of national reporters at his back. And all of this in the full view of Nigel Wright, who helplessly watches them tweet his testimony, word by word, to the Internet.

One sardonic exchange summed up the dissection that Nigel Wright underwent Thursday. On February 6, 2013, in an email to four PMO staff over the brewing controversy, Wright said,

"But let this small group be under no illusion. I think that this is going to end badly.”

That was an opening that Bayne couldn't resist. "It did end badly didn’t it?” he asked.

“Yes,” replied the witness, "And it hasn’t even ended.”