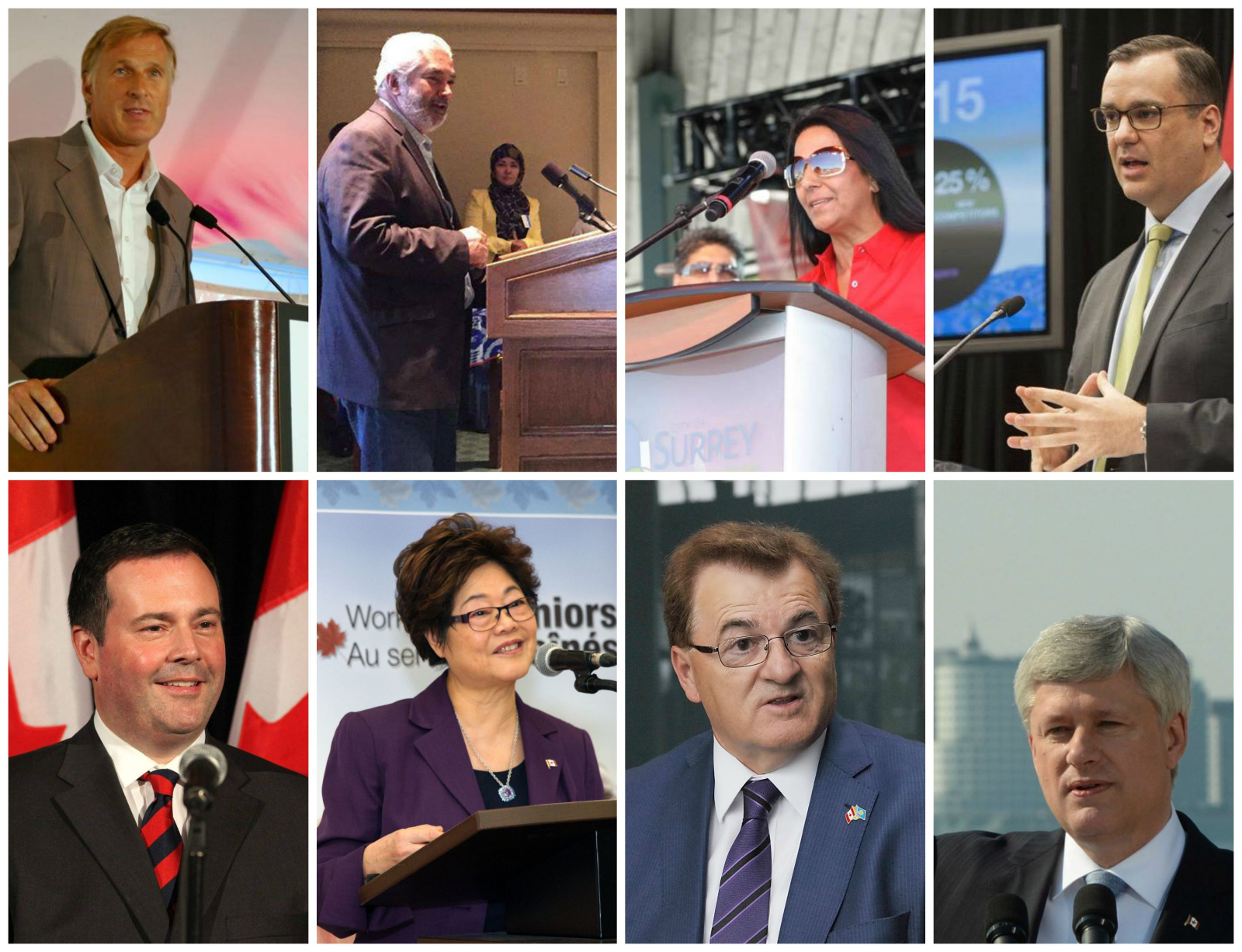 A National Observer review of public expenditure records between 2013 and 2015 shows that Conservative MPs spent more on travel than their opposition counterparts.

While the Conservative Party's website states that since 2006 "the Harper Conservative Government has replaced the old Liberal culture of entitlement," travel records from Conservative MPs indicate otherwise.

For instance, Conservative MP Maxime Bernier, Minister of State for Small Business and Tourism, billed taxpayers $7,367 for a plane trip to Calgary and Edmonton in February 2015.

He racked up a total bill of $8,430 from the public purse from that trip alone, spending an additional $252 for 'other transport,' $587 for accommodation, $118 on meals and incidentals, and $105 on other unspecified expenses, according to figures from Industry Canada's website.

But not all Conservatives are high fliers. Conservative Health Minister Rona Ambrose billed only $649 for her trip to Vancouver in 2015, and Natural Resources Minister Greg Rickford has consistently travelled across the country for under $2,000.

Members of Parliament are allowed to designate one person as their "designated traveller," usually a non-dependent family member. Of all parties, Conservatives have the highest percentage of spenders on family travel between Ottawa and their constituencies.

Defense Minister Jason Kenney once billed $6,000 to fly his mother from Calgary to Ottawa, but after being called out by writer Kevin Grandia on Twitter, he promised to pay for her ticket himself in future.

Kenney’s spokesperson Daniel Proussalidis said that when the minister learned of the cost of the ticket in question, he removed his family member from Parliament’s Designated Traveller Registry and now pays for such family travel costs personally.

“During his tenure as a Member of Parliament, Mr. Kenney has used the House of Commons Designated Traveller policy to be accompanied by a family member less than once a year, far below the average for all Parliamentarians. The booking in question was made by a travel agency for an immediate family member to attend Mr. Kenney's ministerial swearing-in ceremony," said Proussalidis in an emailed statement on Sept. 25. "Notice of the event came at the last minute, when only higher cost fares were available. Mr. Kenney was not aware of the cost of the flight, and would not have authorized it had he been made aware."

Kenney’s fellow Conservative MP Nina Grewal was recently mocked online for spending an average of $5,000 to fly her family dependents between Ottawa and her home riding of Fleetwood-Port Kells in B.C. 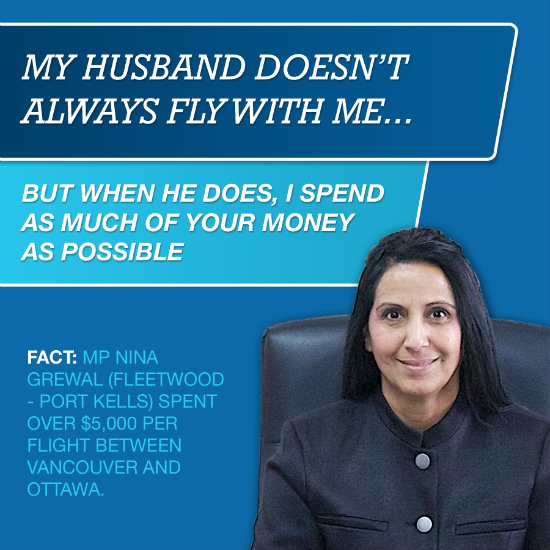 However, Kenney and Grewal were hardly alone in booking pricey flights to bring over spouses or relatives for visits.

In 2013-2014, eight of the top 10 highest-spending MPs on designated travellers were Conservatives— including three cabinet ministers (Jason Kenney, Alice Wong, James Moore) and the prime minister himself.

According to Parliament’s Internal Board of Economy records, these elected officials on average spent between $3,800 and $6,200 per person every time their spouse or a member of their extended family traveled to meet them. The majority of these trips were round trip journeys from the MP's constituency to Ottawa.

In 2013-2014, Canada's MPs spent an average of $1,410 on designated travellers. Sixty-seven MPs spent more than the average, including 51 Conservatives, nine NDP members, and seven Liberals.

The Parliamentary expenditures report by member for 2013-14 shows that Tory member John Duncan flew his wife 26 times to Vancouver Island and on other trips, leaving taxpayer's footing a bill of $60,194. His own travel tab came to $66,570.

PM Harper was not far behind, billing taxpayers $41,340 for his designated traveller and another $10,733 for his family dependents.

The records show that B.C. MP James Moore, currently Harper's Ministry of Industry, billed $31,285 for his designated traveller and another $62,810 on himself.

Close behind him was Calgary East's MP Deepak Obhrai, who spent $28,649 on his designated traveller, while billing $62,889 for his own travel between Ottawa and his Calgary constituency.

“My designated traveller is my spouse who also uses flight passes and travels to Ottawa approximately once a month to look after the apartment we rent as I am very busy in the house morning to night. She, as President of the Hindu Society of Calgary, is also required to be in Calgary; so we try to make best use of our time,” said Obhrai in an emailed statement dated Sept. 25.

When asked about his own expenses, Obhrai maintained that there is no first class air travel within Canada; only business and economy.

“As per House rules, travel less than two hours is on economy and over two hours is on business. Therefore, all my travel less than two hours is on economy," Obhrai said. "I am the senior most Parliamentary Secretary for Foreign Affairs, which requires me to travel very frequently to Ottawa for foreign affairs duties (i.e. hosting and meeting foreign dignitaries when minister is not available). Due to economic reasons I don't charge this travel cost to the department, but rather to [the] House of Commons."

However, Obhrai said that all his House of Commons travel is paid for using flight passes that cost about $2,000 return, instead of regular business class tickets that cost roughly $4,000 for a round trip.

“Charging the department for this travel would cost full fare. By using this method I save tax payers a lot of money as both House and Department [of Foreign Affairs and Trade] use taxpayer dollars,” said Obhrai.

In addition, he said that since becoming an MP, neither Obhrai nor his spouse had ever used their full allocation of travel points.

Parliament's expenditures report also reveals that Conservative MP Andrew Scheer spent $42,226 on family dependent travellers last fiscal year, higher than his own bill of $35,647 and well above his designated traveller tab of $11,004.

Despite the numbers of MPs from all parties singled out as big spenders, it should be noted that other Conservative ministers managed to fly their family dependent members for only around $1,500.

In the 2014-15 year, B.C. Conservative MP Richard Harris led the pack with a total of $56,102 spent on his designated traveller and another $1,235 on dependents, according to Parliament's expenditures by member report for that fiscal year. His own travel tally was $65,710. His caucus colleague Andrew Scheer billed $43,388 on his dependents and $12,517 on his designated traveller. His personal total was $33,476, results not too different from 2013-14.

Meanwhile, Prime Minister Harper spent only $26,567 on his designated traveller and $6,177 on his dependents.

However, MPs who live in remote ridings — or represent larger ones — do receive extra money on top of their basic office budgets to help them cover expenses, according to a 2013 CBC report. The annual office budget allows MPs to pay for employee salaries, service contracts, advertising, constituency office leases, office operating costs, some travel expenses, and other miscellaneous expenses.

According to the CBC’s report, MPs receive an annual travel budget of $26,238 plus daily allowances for food and other costs while they conduct parliamentary business in Ottawa. MPs whose primary residences are located more than 100 kilometres from the capital can also claim housing expenses.

The House of Commons also provides MPs with additional financial resources to cover the costs of their various Parliamentary functions.

All MPs in this story were contacted for comment.