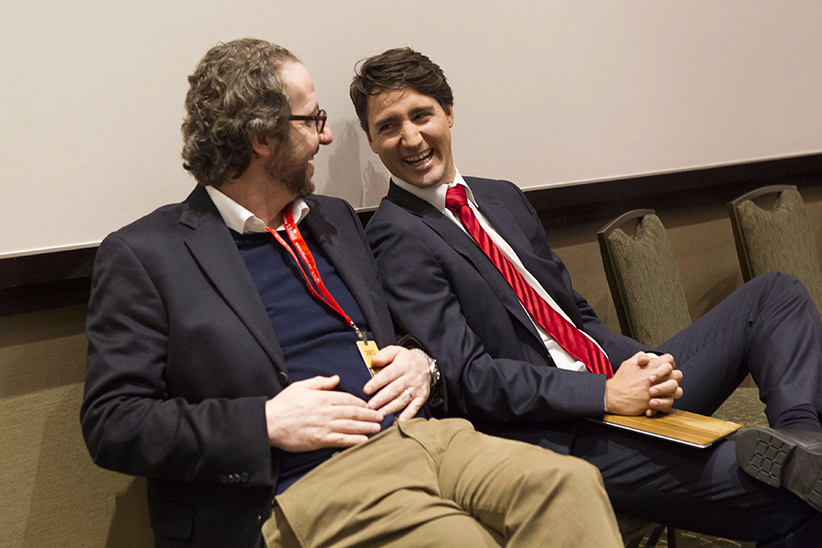 Justin Trudeau became Canada’s 23th prime minister on Wednesday, and it was in no small part because of his best friend, policy wonk Gerald Butts.

In the beginning, neither anticipated Trudeau would become prime minister, much less enjoy a majority. The original thinking was that it would take Trudeau two elections to become leader. The first was meant to bring the dispirited Liberal Party back into contention; the second was to gain power.

But plans have a funny way of unraveling and over the course of the long fall election, things quickly changed. The Conservatives’ mean-spirited campaign backfired and suddenly Trudeau was no longer “just not ready.” He was the man to beat.

And if Butts, campaign strategist Katie Telford, and the rest of Trudeau’s inner circle were caught off-guard, they didn’t let it faze them. They rose to the occasion, took charge, and brought their candidate to office.

“The circumstances, the way everything unfolded and the way they ran the campaign, a change in views with Mr. Harper over time, led them to an opportunity that perhaps they hadn’t expected,” observed Phil Dewan, former chief of staff for Ontario Liberal Leader, Dalton McGuinty. Dewan was Butts’ boss when the latter worked at Queen’s Park for McGuinty, first as a policy director and later as principal secretary during the late 1990s.

And the day before the Liberals won their unexpected majority, the Toronto Star opined that the smartest move on the part of the Trudeau campaign was to break with tradition and have Butts, the lead campaign advisor, travel with him every day. According to the paper, Butts coaxed the best performance every day out of his boss while continuing to shape the policy decisions that influence the public’s view of the Trudeau Liberals.

By all accounts, policy is what Butts excels at. In a Halifax Chronicle Herald profile of Butts, Roger Cuzner, MP for Cape Breton-Canso, called him a “policy ninja.” Two other sources told National Observer that he is exceptionally skilled at shaping policy, and understands both its public and political aspects.

As a recent example, one Liberal MP points to the party’s support of Bill C-51 earlier in 2015. The party’s vote in favour of the controversial bill the Conservatives introduced brought pointed criticism and for a while looked as if it might tarnish the Liberal brand.

Their position on the bill even unnerved MPs within the party. Cuzner told National Observer of being in British Columbia and hearing from candidates that the vote was going to cost the party and that they were losing volunteers because of their support of Bill C-51. “There was a great deal of unease within our caucus,” Cuzner said.

In June, Butts approached the Liberal caucus and told them they could change the policy, change the bill, and that they would articulate the changes they would make, but ultimately it wouldn’t hurt them at the ballot box. Butts told them people on the left would use Bill C-51 as something to beat them with, but then those weren’t folks who would vote for the Liberals.

“So he knew our policy, or the approach that we were going to take,” Cuzner said. “He knew that wasn’t going to be a big vote shifter. Those that were basing their decision on our position on C-51, their vote on our decision on C-51, he understood that, really, we probably didn’t have those voters anyway.”

Writing for The Walrus, journalist Scott Reid noticed the same hard-nosed, gutsy approach to policy. “A similar flair for the bold can be detected in two of Trudeau’s high-profile moves,” Reid wrote. “Legalizing marijuana and expelling the entire Liberal Senate caucus reflects Butts’ willingness to entertain risks, provided they come with the promise of a big payoff.”

Now the pay-off is here and with Butts guiding policy, it’s likely the new Liberal government will offer a pragmatic approach with an emphasis on the economy and the environment, often with the two tangled together.

Butts grew up an “849er,” the term used for residents who live in the 849 area code of Glace Bay, Cape Breton—and the way residents of that part of the island often self-identify. In no small part, Glace Bay likely helped form Butts’ love of the wilderness and his environmental convictions.

The community of some 20,000 people on the eastern tip of Cape Breton was highly industrialized, largely a coal-mining town until the industry died away in the late 20th century. Butts’ father spent his life underground as a miner, while his mother worked as a nurse for one of the mining companies. Butts’ father made sure all the kids went to school, so they wouldn’t have to labour underground in the mines.

Dewan said part of what drives Butts is his upbringing in Glace Bay, and how hard his father worked in the mines to put all the kids through school.

“It’s an important factor. He talks about it. The parents have worked very hard to give the kids opportunities, so a sort of traditional, small rural Liberal vision of the state being able to support the aspirations of people who work hard to achieve them is an important part of where he comes from.”

Equally influential was his aunt, Sister Peggy Butts, a nun who had taken a vow of poverty. Peggy was a highly educated woman with three degrees, including a Ph.D in political philosophy from the University of Toronto.

When she was 73, then Prime Minister Jean Chretien appointed her to the Senate. While she was a Senator, she donated all her pay to the poor. She’d come over most days to Butts’ place for lunch when she taught at Cape Breton University. “I’m sure that had an impact," said Cuzner. "Whether it was nature or nurture, [Butts] got it from both sides.”

Butts attended McGill University, gaining a B.A. and a M.A. in English. His thesis for the latter was on Irish writer James Joyce’s Ulysses. Butts wrote in the abstract for his thesis – titled Between Two Roaring Worlds: Personal Identity in James Joyce’s Ulysses — that he was attracted to how the book was “energized with ‘warm full-blooded life’.”

Butts and Trudeau met at McGill, where both were members of the debating club, and they became best friends. After university, Butts went to work for Liberal Senator Allan MacEachen, who also originally hailed from Cape Breton. He then worked for Ontario Liberal MLA, George Smitherman, who not incidentally brought in Ontario’s Green Energy Act in 2009, as the Minister of Energy and Infrastructure under Premier Dalton McGuinty.

In 1999, while McGuinty was still the Leader of the Opposition, Butts showed up to apply for the position of policy director. Dewan, then McGuinty’s chief of staff, said they went through a full hiring process, but Butts was clearly head and shoulders above the other candidates.

Dewan calls Butts a political animal and says he lives and breathes politics. “He studies all aspects of it, not just the policy side which is his real interest, but the mechanics of it as well and [he] obviously has a huge network of people he reaches out to.”

In 2003, McGuinty beat Conservative and then Ontario Premier Ernie Eves to form the new provincial government. The provincial campaign eerily presaged another, later campaign, Harper versus Trudeau, when a member of the Eves team sent out a bizarre press release calling McGuinty an “evil reptilian kitten-eater from another planet.”

The Liberals ran a campaign that had Butts’ fingerprints all over it. The theme was “Choose Change.” Sound familiar? The negativity of Eves’ campaign cost the Conservatives the election.

McGuinty’s time in office saw several major environmental initiatives put in place, in large part attributed to Butts. One was the creation of a greenbelt around Toronto to preserve farmland and forests from development.

The other might be characterized as the revenge of the coal-miner’s son: a plan to shut down all coal-burning plants in the province by 2007. Although it took much longer than expected to materialize, the idea to close coal-fired generating stations originated while Butts was working with McGuinty.

Not the other guys

In 2008 Butts left to become the President and CEO of World Wildlife Fund Canada. There, he began to demonstrate his brand of environmental and economic pragmatism. As Reid's Walrus profile notes, Butts negotiated the Canadian Boreal Forest Agreement, a “compromise that now protects 29 million hectares of woodland caribou habitat from logging. The deal also meant shaking hands with the forestry sector, an industry not known for environmental extremism.”

Butts took some heat for aligning the WWF with Coca-Cola over such things as a freshwater strategy when the latter company was criticized as a seller of bottled water. At the time, Butts noted that WWF’s partnerships with companies like Coca-Cola not only helped fund the agency’s conservation programs, but helped “the business sector to increase their commitment to sustainable development and environmentally sound practices.”

Throughout this time, Butts kept in touch with Trudeau. In 2009, he showed up in Glace Bay for a fundraiser for Cuzner. After the event, half a dozen people, including Trudeau, went to the town tavern, a place called The Main Event. With great delight, Trudeau rang up Butts and said, “You’ll never guess where I am.”

In 2012, Butts left the WWF to become Trudeau’s senior political advisor. Among other things, Dewan said, Butts brought a positive vision to the most recent federal election campaign, something he practiced in the provincial campaign against the Conservatives.

“I think there’s a core belief, a tactic, that you’re better off offering a positive alternative, putting a real vision in the window that people can get excited about, and I think the turn-out in this election reflects to a large degree that the Liberals did a good job about exciting people about a positive turn-out,” Dewan said.

“They were not the other guys.”

It’s a safe bet that if Butts articulated the idea that voting for Bill-C51 only alienated the voters on the left who wouldn’t have voted for the Liberals anyway, that government will pursue pipeline politics with the same conviction. And while the Liberals likely won’t shy away from pipelines, they will try to balance them with the vigorous program of renewable energy and associated jobs they’ve promised.

The balancing act won’t be easy, but Butts – the coal-miner’s son who helped abolish coal-fired plants in Ontario, the acerbic but affable Twitter user, the former WWF head who welcomed Coca-Cola – is uniquely qualified to pull it off.