Shattered Tory caucus knows election defeat was all about Harper 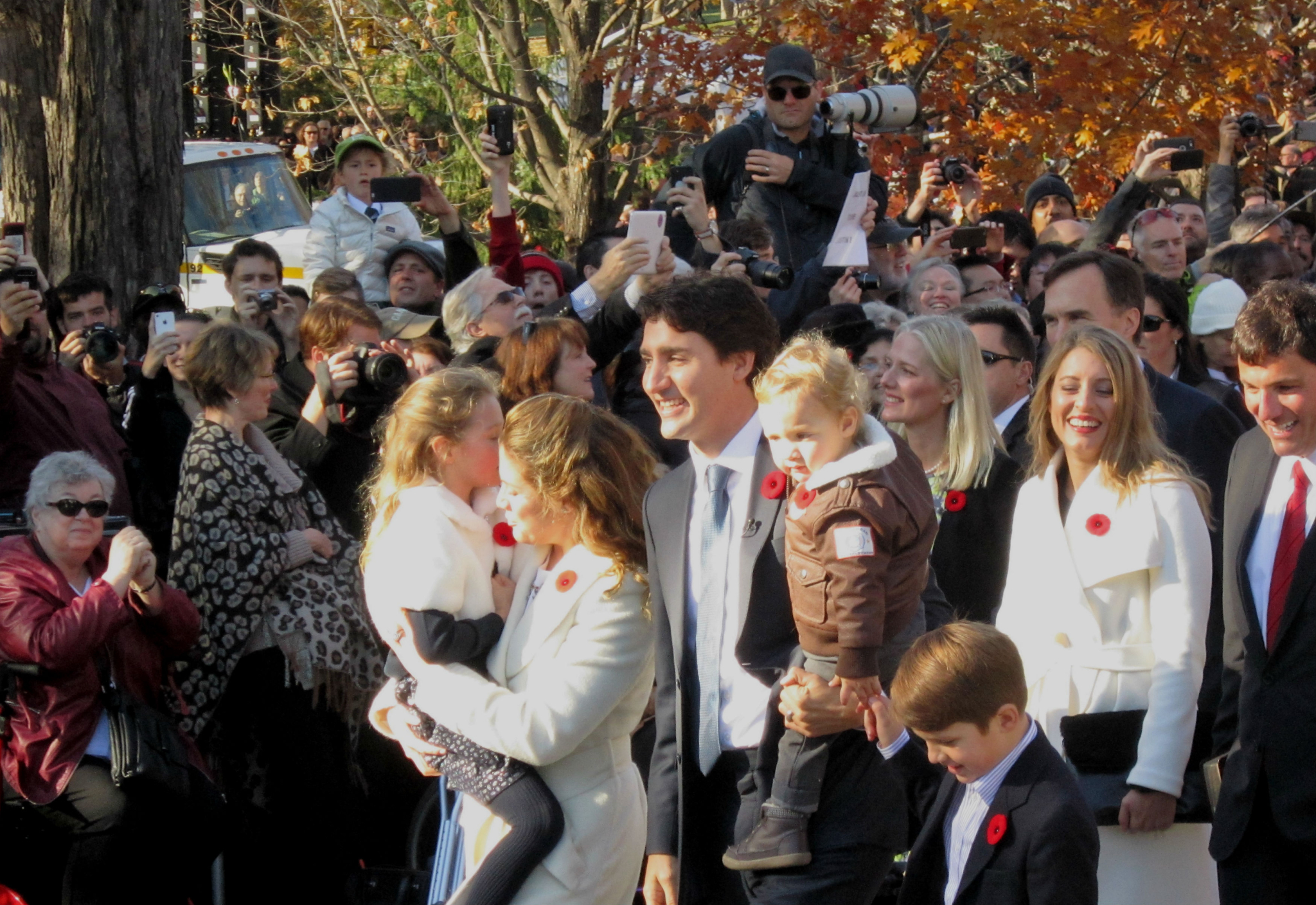 Justin Trudeau approaches Rideau Hall in Ottawa to be sworn in as prime minister on Nov. 4, 2015. Photo by Fram Dimshaw.
Previous story
Next story

Watching the cabinet swearing-in this morning on CTV, I don’t know how many times we had to hear veteran reporter Craig Oliver tell us how well he knew Justin Trudeau’s dad, that he completely concurs with the new 50-50 quota cabinet, that better times are ahead now that Harper has been banished from office, or how much nicer Justin is to talk to.

For Conservatives today, and especially those MPs returning to Ottawa for the first caucus meeting following the election disaster, it really doesn’t matter.

What they had feared for more than two years – that Justin Trudeau would assume power in a coronation-like atmosphere – had finally occurred. And despite running the same tired, illogical ad suggesting Trudeau was “just not ready” now, but by clear implication, might be ready some day, his coronation somehow seemed inevitable.

There were cheering throngs lining the path to the Governor General’s residence, and applause and fanfare when Trudeau repeated his oath of office. And yes, the gushing journalists who could not contain their enraptured giddiness that Trudeau had won confirmed the circulating narrative of a more just world.

Even my old friend Bob Fife, usually a straight and objective arrow in the national media’s quiver, couldn’t resist noting how much more accessible this cabinet swearing-in was, how much more the new administration seemed to welcome the media.

For the glum Conservative caucus – witnessing Stephen Harper transitioning from a serving prime minister to a former one before their very eyes – this was obviously not their day.

Of course Harper will accept responsibility for the electoral defeat; he could not do otherwise. He was a man who insisted on absolute loyalty from his MPs and staff, and complete control of every event.

How could he blame loss on the inexperienced kids who pushed out election ads without even checking if the pictures matched up with the text? How could he suggest that too many flawed candidates were approved to run when he signed all their nomination papers? How could he claim that it was all Mike Duffy’s fault when he himself appointed him to the Senate?

The tendentious media coverage today was noted, and it struck the usual conservative chord about the biased and liberal national media, and how they always hate us. But there was a shade more reflection in that accusation today as some MPs remembered just how assiduously the Conservative government had worked to marginalize the media; sometimes seeming barely tolerant of the notion of free press by exhibiting brazen disinterest in their role in the democratic process.

Ultimately, no MP or minister was allowed to speak freely about his or her work if a reporter was within earshot.

It all came back to haunt these MPs today, just as it was taunting those unsuccessful election candidates who did not return to Ottawa.

There is a lot of anger amongst the caucus and the grassroots in the wake of this campaign.

The election team decided to run this race as an all-Harper, round-the-clock engagement, and Harper apparently eagerly embraced that horribly inappropriate perspective. The incumbent Conservative was a solo act at every campaign stop, eschewing support from local candidates, ignoring the presence of popular cabinet ministers, forgetting even that he was running as leader of the Conservative Party and not the Harper Party.

The MPs and former ministers are wondering why they weren’t allowed to contribute – in any functional or creative way – to this campaign.

Then when Harper, just weeks before voting day, decided to run a commercial proclaiming “this election is not about me,” it just about induced mutiny.

Instead, these victims of the Harper imprisonment, these MPs with their mouths gagged, finally ran to the media when Harper lost. It was like coming up for air after a long period under water. They talked about the restraints, the abuse, the nonsense – it was all very therapeutic.

While the party remains in transition mode, with an outgoing leader or an interim leader, the frank discussion will continue. They are unsure what awaits them when the next Conservative leader emerges.

The grassroots, once an essential component of the conservative movement and certainly a very aggressive and active participant in the party’s Reform roots, are almost angry beyond articulation. The Conservative Party started the campaign with its election war chest full to overflowing – thanks to the rank and file supporters who responded to all those annoying phone calls from party headquarters and forked over another $25 or $50 for the cause.

But the money had seemingly evaporated. Where did it go? Not on all those Justin Trudeau ads?

It was the supreme irony of the campaign for the brain trust behind the Harper re-election machine: they had pronounced Trudeau unprepared for the job so often and for so long that by election day, most people figured he must be ready by now.

Indeed, an atypical caucus day for these Conservative MPs.

The leader will no doubt be contrite; philosophical. The things they wanted to tell him three months ago will no longer seem worth raising. There is always next time and tomorrow is another day. Somehow the old cliches have lost their traction.

There are only lessons to learn, and for the Conservative Party to again be a viable contender for government, it had better learn those lessons.