B.C.'s grey wolves are remarkable animals, able to cover a distance of more than 100 kilometres in a single day with their pack. They rule their territories — anywhere from 100 to 500 kilometres2 and marked with scat and urine — as one of Canada's top predators. Now, some are apparently being targeted to be shot from helicopters as part of a controversial government effort to protect a dwindling caribou population.

Gunning down wolves from helicopters is less likely to control the wolf population of British Columbia than inflame public sentiment against the government that condones the officially-sanctioned wolf kills, according to Chris Darimont, the Hakai-Raincoast professor at the University of Victoria and science director of Raincoast Conservation. 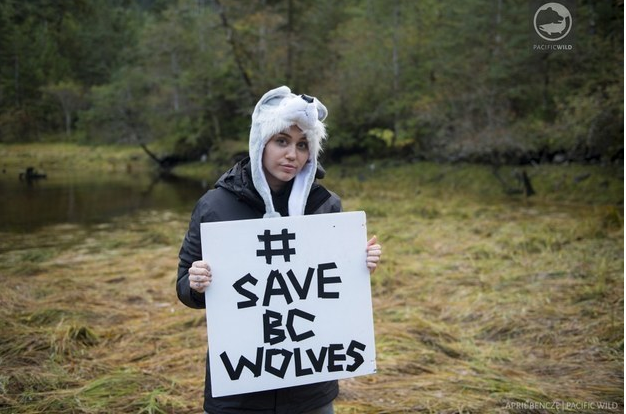 Photo of Miley Cyrus by April Bencze of Pacific Wild

The 25 to 35-kilogram wolf hunts deer, elk, moose, caribou, bighorn sheep and bison and will supplement its diet with smaller mammals, including beaver, snowshoe hare and mice.

Grey wolves can scent prey from over 1.5 kilometres away and hunt as a pack, running down faster animals such as deer and throwing their weight against the prey to knock it off balance, according to the Alberta Wilderness Association.

Even so, life in the wild is hard and wolves often die young, and injuries sustained attempting to take down larger prey such as moose can result in fatalities. The wilderness association says a pack’s hunting success is low: on average, for every 12 moose pursued, only one is killed.

To contact and locate pack members, wolves howl with each member singing at a different pitch that is recognizable to the others. They can hear howls from up to 10 kilometres away.

Darimont is adamant that wolf culling is not an effective strategy to help caribou recovery.

"It’s a policy to influence politics. The province needs to be recognized for 'doing something'. And despite the controversy about wolf control now, its easier politically than halting industry where endangered caribou roam."

But that strategy is likely to backfire on the province, Darimont said, adding that predator control measures are often abandoned once they come to light to an increasingly upset public.

“The political calculus changes. It's getting towards that point in B.C. Clearly, the environment is important to B.C. voters, and they no longer want to give industry and government a free pass.”

At one time, grey wolves ranged across North America, but now are restricted to wilder northern regions and national parks. They aren't endangered, but habitat continues to shrink because of human activity. 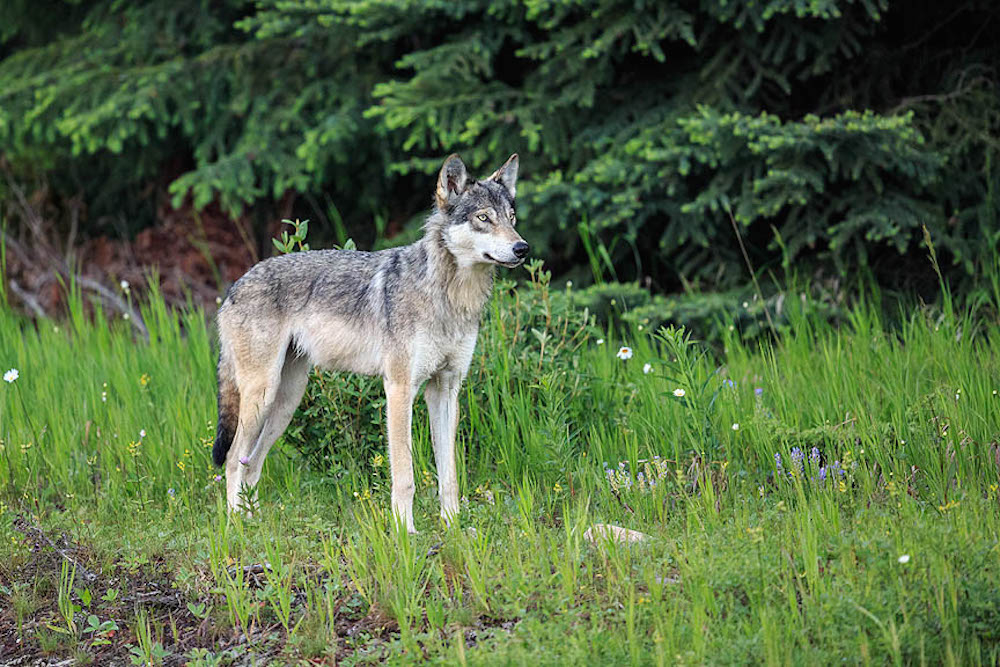 To be sure, the question behind the wolf cull is how to protect the endangered mountain caribou, an animal at risk of extinction. The current mountain caribou population numbers about 1,500 in 15 separate herds throughout the province.

One herd, the South Selkirk, only has 18 surviving caribou. And in the South Peace, the four herds there are on the decline.

The province contends the wolf is a key factor in the caribou decline, attributing at least 37 per cent of all adult deaths to wolves.

The province maintains it has set aside some 2.2 million hectares of protected habitat throughout the province, calling it caribou habitat safe from industrial and recreational activity.

But with the continuing decline of the caribou, “the government made the difficult decision and took the extraordinary action to remove wolves in the South Selkirk and South Peace,” according to a government backgrounder.

Not just an issue in B.C., Alberta culls wolves, too

Stan Boutin, a professor in the Biological Sciences Department at the University of Alberta and the Alberta Biodiversity Conservation Chair, says in Alberta logging and oil and gas exploration have forced wolves and caribou into the same territory where once they were separate.

In order to protect the caribou, Alberta began culling wolves in 2005. Boutin estimates the province has killed roughly 1,000 wolves to date.

There, the wolves have been killed in one of two ways. Individual wolves from different packs are captured by net-guns fired from helicopters. They are then fitted with a VHF radio collar and released so that they can lead the hunters to other pack members.

After the pack members are killed, the radio-collared wolves are shot as well.

The second way has been to administer bait laced with strychnine distributed at 15 to 20 locations throughout the winters.

But the poison has had collateral damage. In addition to some 154 wolves, the poison has also killed 91 ravens, 36 coyotes, 31 red foxes, four American martens, three lynx, two weasels and two fishers, according to a 2015 report, Maintaining Ethical Standards During Conservation Crises, published in the peer-reviewed Canadian Wildlife Biology and Management.

Boutin says current information from the last assessment on a small herd of caribou in west-central Alberta suggests the population has stabilized with the wolf cull program; however, the number of caribou is not increasing.

Boutin favours the cull and advocates that both habitat protection and a cull “have to be in the toolbox.” He said it’s already too late to try and bring in recovery strategies. He estimates it could take as long as 50 years to properly restore habitat.

“The magnitude of human development and action has been such that even if we were to stop that development with protection, get really aggressive with restoration and recovery, the time it takes to put that back to the way it was when there was no overlap between wolves and caribou is far too long.”

In B. C., the Provincial Grey Wolf Management Plan, unveiled in April 2014, comes up for evaluation after four years. In the meantime, the cull — and the killing — continues.

Nonetheless, many wonder why the wolf should have to pay habitat lost to human activities.

In September 2015, 10 environmental groups sent a letter to Clark, protesting the money being spent on the wolf cull while forests critical to animal survival continued to be destroyed or fragmented by industry.

The letter noted that habitat protection under the province’s 2007 Mountain Caribou Recover Plan was failing, while the funds went toward predator control and caribou maternity penning and relocations.

The groups argued that if the province continued to expend resources on “experimental techniques,” instead of concentrating on protecting habitat, “B.C. could be left with no caribou, and if that happens, the caribou conservation zones could revert to logging, with no new parks of substantial size to help keep other species from extinction.

Darimont said that the truth is no one knows what will work for caribou, at least in the short term, because so little has been done, aside from wolf control.

Darimont agrees that in terms of population, the wolves are not in danger. He said they respond to persecution with increased reproduction and movement to other areas.

“And that's precisely why wolf control does not work. It's very difficult to keep every wolf out of an area for long. And that's also why its so cruelly unnecessary — many wolves die with no positive benefit for caribou.”

—With files from Jenny Uechi