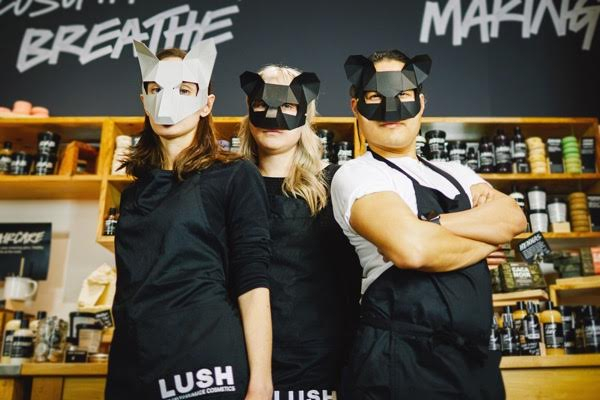 With a postcard campaign, and store clerks wearing wolf and bear masks, cosmetics retailer Lush has stepped into the furor over British Columbia’s proposal to raise the limit on wolf and grizzly bear trophy hunting.

In the lead-up to the January 31 deadline for public comment in B.C., Lush has been waging a campaign in its store and online, asking clients to write the government to quash the proposed new limits for trophy hunting. Its website features a how-to guide for citizens to comment on the issue before Sunday deadline.

“We’re opposed to any increase in what they have as limits,” Carleen Pickard, the company’s ethical campaigner, flatly said.

“As a company that stands up for animal rights, we are opposed to the killing of animals.”

B.C. is proposing to change the limit and season on wolves in the northern Peace region from respectively three to unlimited and to all year around from the current hunting seasons of August 15 to March 31 and April 1 to June 15.

According to the government the rationale is that verbal reports from “many” stakeholders and First Nations suggest the wolf population in the northeast is very high.

In its proposal the government says the trophy hunt is a component of a broader predator management strategy in the northeast.

That would be an oblique reference to the province’s equally controversial wolf cull, which involves radio tagging a wolf so that it will lead snipers, who can shoot and kill wolves from helicopters.

At the same time, the province wants to raise the limit on grizzly bears from 50 to 150. The proposal says current population estimates suggest the increase for resident hunters could be made “without posing any conservation concern.”

Lush printed out close to 8,000 cards on the issue, which staff have placed in customer’s bags and handed out at the company’s 13 B.C. stores. The cards direct people to where they can get more information on how to make a comment on the government website.

The company is strongly vegetarian/vegan and has campaigned throughout its existence for the end of animal testing and other animal rights issues, Pickard noted.

Lush is hardly the only entity opposed to the trophy hunt.

In December 2015, the polling firm Insights West found that 95 per cent of British Columbians opposed the hunting of animals for sport.

As well, a number of environmental groups are putting pressure on the Christy Clark government to drop the hunt.

The Raincoast Conservation Foundation has called the new trophy hunting proposals “unscientific, unethical and indicative of a politically driven decision making process, rather than science-based decision making on factual analysis.”

Pickard said the current campaign marks the start of an 18-month effort during which time Lush will partner with other environmental nonprofit organizations to “really make trophy hunting an issue and work toward a longer-term strategy of a ban on trophy hunting.”