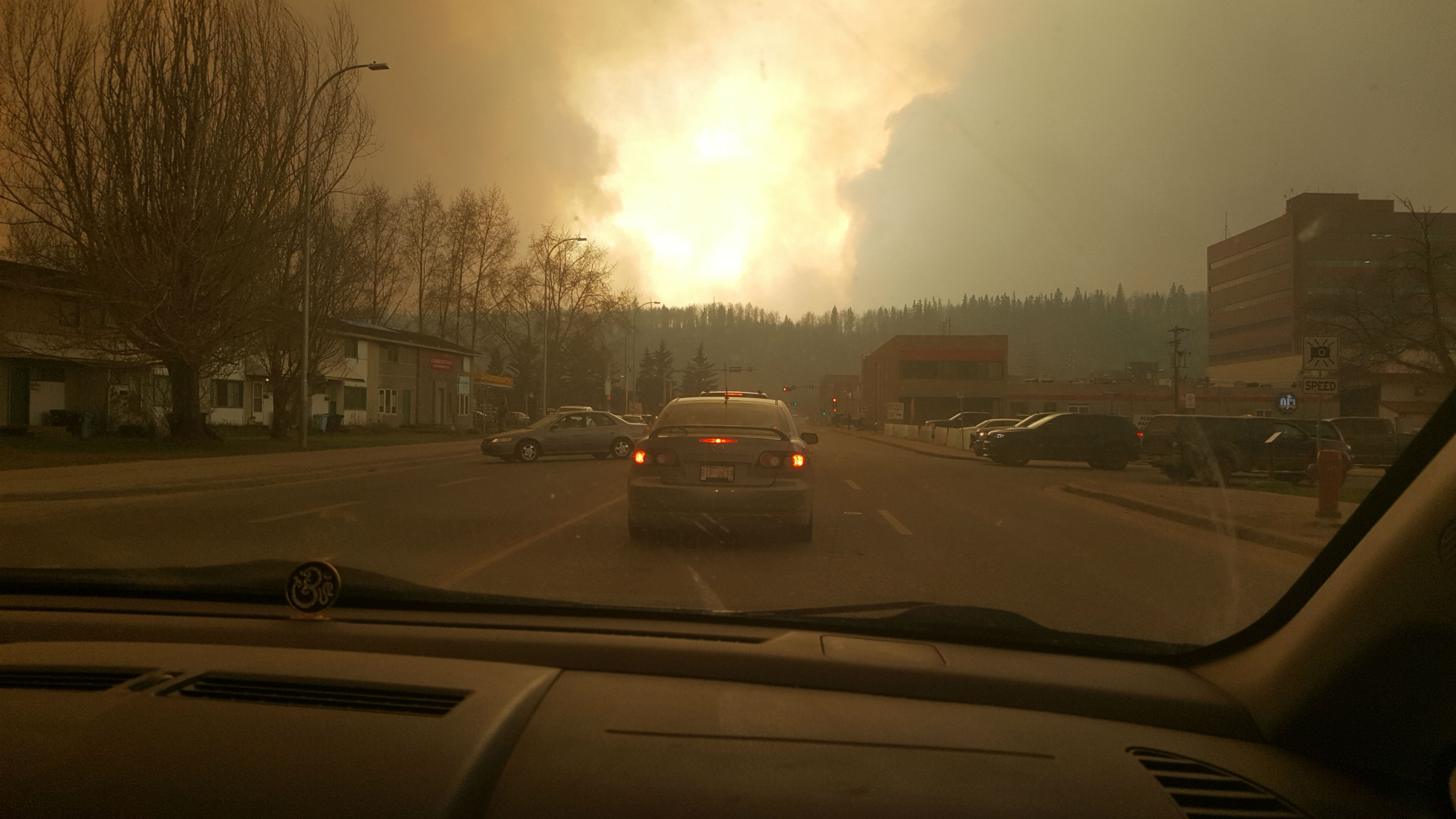 The blaze rages on as residents flee north to communities like Fort McKay. Photo by Dylan Thomas.
Previous story
Next story

When Russell Thomas realized the extent of the blaze in Fort McMurray, he had two options: ditch his vehicle, bolt down the hill at the centre of town and try and make it to his family, or go back the way he came — from a workshop south of the city.

He had only seconds to make his decision. An "apocalyptic cloud of fire" raged to his left and the road before him was impassable. But his wife and two sons were packing their bags from their home near the bottom of the hill.

If Thomas could make it down there in one piece, he could flee the city with his family. Despite his urge to rejoin his family, he decided to turn back.

Looking back, that snap decision saved his life, he says.

“I talked myself out of it and I probably wouldn’t be alive if I hadn’t," he told National Observer from the Mark Amy Treatment Centre roughly 40 kilometres south the northern Alberta city. "I have never, ever been more scared in my life."

Thomas is currently borrowing a phone and computer from the United Way agency, where he participated in a workshop yesterday before the wildfire took over Fort McMurray on Tuesday. His wife, Heather, and 12-year-old son, Ben, are staying at a camp north of Fort McKay, and his 17-year-old son Dylan is staying with his birth mother in Fort McKay.

Ben has severe allergies and breathing problems, and was luckily able to leave the city quickly. The family managed to grab a few important documents and supplies, while Thomas escaped with nothing but the clothes on his back and the paints he had brought with him to the workshop that day.

The Fort McMurray resident of 20 years couldn't be happier that everyone he loves is safe, but could barely get through a sentence when asked about being separated from his family during a time of crisis like this.

Separated from wife and children

“I don’t know when I’ll see them again," he said in a shaking voice. "They're both in safe places, I’m in a safe place, and all we can do right now is wait it out.”

The family's home in downtown Fort McMurray is still standing for the moment, but dozens of homes have been burned to the ground across the city in neighbourhoods like Beacon Hill, Abasand, and Waterways. The highways leading north of Fort McMurray are packed, and the entire region — including emergency camps for victims of the tragedy — are locked under boil water advisories and water shortage warnings.

So far, no casualties are reported.

"Today will tell the tale," said Thomas. "If we can make it through today, I’ll be optimistic that we’ll still have a home.”

The entire event reminds him of the 2011 fires in Slave Lake, Alta., which he followed closely as a city councillor of Fort McMurray at the time. While it's too early to say whether the damage is comparable in both disasters, he said social media played a "life-saving" role in facilitating the rescue operations in both scenarios.

"They’re doing a great job of putting out the best information they possibly can have in a way that is expeditious," he said.

"Nothing short of heroic"

Thomas' brother-in-law is second in command of operations fighting the wild blaze in Fort McMurray, and remains there today, fighting. He said he gets "weepy" when thinking about the strength and resilience shown by first responders to the disaster, and the kindness of outside communities that have welcomed in the city's residents.

"What they were doing yesterday was nothing short of heroic," he told National Observer. "They were in the middle of the intersections guiding traffic surrounded by flames and they stayed through the night. They did so calm and respectfully — I can’t say enough about the incredible burden that they shouldered.”

Neighbouring communities continue to open their doors to strangers today, he said, and dozens of corporate tanker trucks have parked themselves on highways to offer fuel to resident residents evacuating Fort McMurray.

It's tough to think about the future at a time like this, when one's very livelihood is up in the air, but Thomas' teenage son, Dylan, is optimistic. It will take several days to restore water and power to the blazing community, but eventually, when temperatures cool down and the smoke dissipates, people will start returning home, he said.

When that time comes, the 17-year-old believes the city will land on its feet, as it always has. While the Grade 11 student desperately hopes his school hasn't burned down, his primary concern is community well-being.

"To be frank, I don’t think life will be the same," he told National Observer from his mother's house in Fort McKay. "But we’ll support each other in every way that we can, because that was Fort McMurray does.

"Fort McMurray gets a bad rep as an oil town, with people coming in and out — but this a loving, caring community. A disaster like this really highlights that and shows that people are here to help and support each other.”

At the end of this, he explained, the community will be stronger.