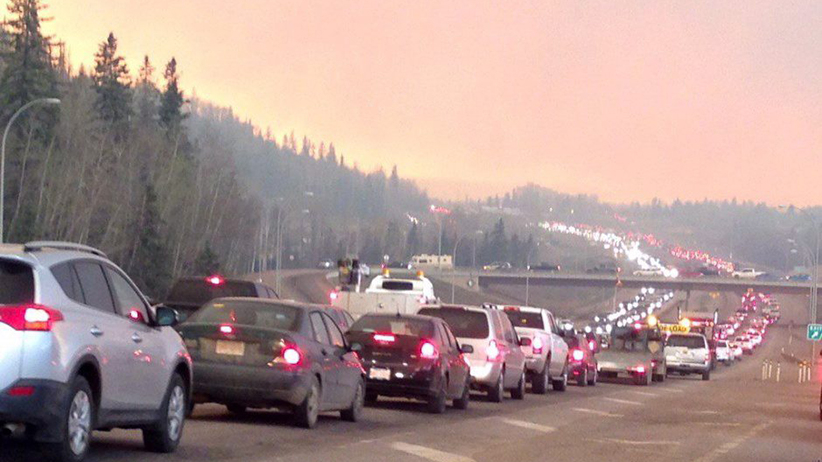 The wild fire raging out of control in Fort McMurray is impacting the production schedule of various companies.

Suncor reported on its Facebook page that its base plant is in safe condition and posted that with safety above all else, the shift requirements are for immediate needs only on Wednesday.

Syncrude tweeted Tuesday that employees at work were asked to hold at their current locations until further notice.

Cenovus Energy reported that its operations are unaffected.

“The worst of the fire is not over,” Bernie Schmitte, manager of Alberta Agriculture and Forestry said in a news conference.

The wild fire raging out of control at Fort McMurray. Video from YouTube

The wild fire impacts more than 80,000 people, making it the largest fire evacuation in Alberta’s history.

A former Fort McMurray citizen, Kimberly Cox, posted on Facebook: "To put this in perspective for my American family, the fire is burning through the forest, and now through a city, similar in size to Liberty Mo. It's too hot to stop it. There is only one road in and out, HWY 63. Many folks did not have enough gasoline to get out. Pets and horses have been left behind. It's apocalyptic."

Cox lived in Fort McMurray for five years. "I love the city, the spirit, the people," she said.

As the city's residents fled the raging wild fire, neighborhoods in the south of the oil patch city went up in flames Tuesday night.

The Regional Municipality of Wood Buffalo reported that Beacon Hill had lost 80 per cent of its homes and described two other areas as having serious loss of property.

Bonnie Bernier posted on Facebook, saying she had family in Beacon Hill. "They are safe, but lost everything. So sad."

Murphy said winds out of the southwest gusting upwards of 30 to 40 kilometres an hour helped blow the fire southwest of the city across the municipality.

As city residents evacuated to Lac La Biche and Edmonton in the south along Highway 63 on Tuesday evening, police patrolled with gas cans, looking for stranded motorists who might have been forced to leave with low fuel tanks.

And on Wednesday morning Alberta Transportation was escorting a fuel tanker to assist with stranded motorists.

At one point during the evening a woman named Kris frantically tweeted that a friend needed a gooseneck hitch for a trailer and needed to get to Grasslands. "She has her two-year-old daughter, dog and two horses."

The municipality later verified that the woman, daughter and pets were safe.

Hotels and motels outside the fire zone filled with evacuees, and a number of oil patch companies made their work camps available for accommodation.

They include Suncor, Civeo Corp and Horizon North Camps and Catering.

In Edmonton, Northlands tweeted that it can accommodate 1300 fire evacuees at two halls and would have 100 beds on site. As well, the Alberta Red Cross will be at the site assisting.

The Al Rashid Mosque in Edmonton was also opening its door to Fort McMurray residents.

The Wood Buffalo Regional Municipality said it was also looking for accommodation for first responders.

Twitter continued to fill up with offers of accommodation for the evacuees. The Smoky Lake Agricultural Society offered camping stalls and a farm tweeted it had room for people and animals.

Prime Minister Justin Trudeau has pledged the government’s support, telling a news conference on Wednesday that federal officials were moving in to help.

And Ralph Goodale, the federal Minister of Public Safety and Emergency Preparedness, said, “I am watching the wildfire situation in Fort McMurray with great concern, and my thoughts go out to all of the residents being evacuated from their homes.”

The Government Operations Centre, including the Department of Defence, are “monitoring the situation carefully,” the minister said, and the government is standing by to provide assistance to the province.

The National Energy Board also said it had dispatched an emergency management expert to the operations centre and that it was closely monitoring a TransCanada Corp natural gas pipeline in the vicinity of the fires.

The Fort McMurray airport was also closed to all flights, and Wood Buffalo issued a boil water advisory for the entire region, including in camps.

A year ago in May, wild fires caused the shut down of two oil sands projects when a 6,000 hectare blaze south of Fort McMurray forced Cenovus and Canadian Natural Resources to halt production.