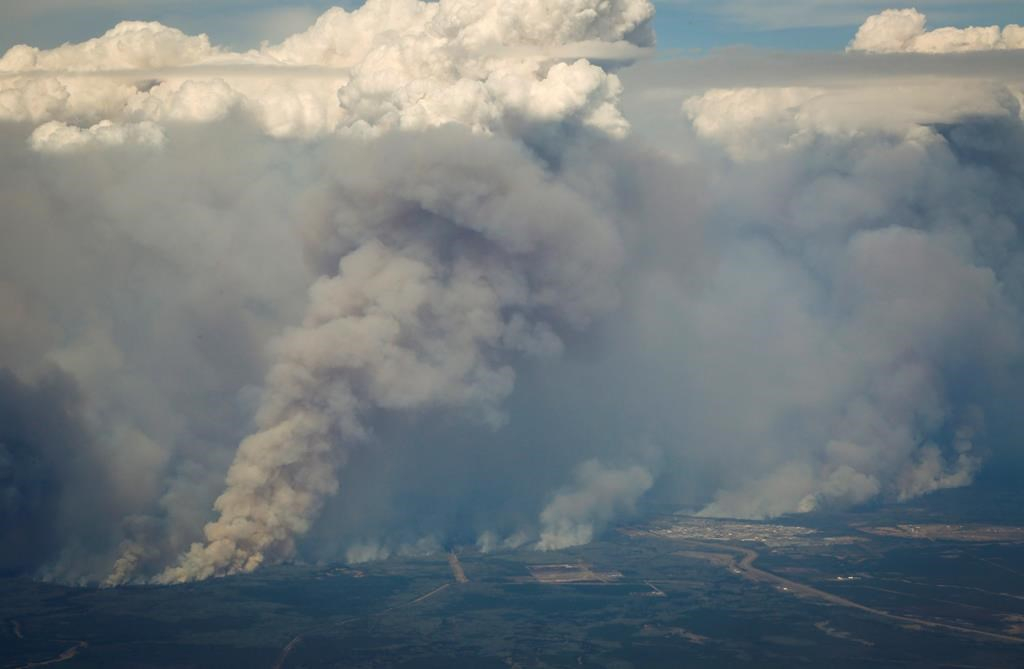 Clouds of smoke rising from Fort McMuray. Photo by The Canadian Press
Previous story
Next story

The raging forest fire that's forced the evacuation of Fort McMurray, Alta., has brought out the worst on social media, with sanctimonious eco-trolls posting incendiary, insensitive and unhelpful barbs describing the conflagration as climate change "karma" for a city that is synonymous with oilsands development.

"Karmic #climatechange fire burns CDN oilsands city," former Alberta NDP candidate Tom Moffatt of Lethbridge posted on Twitter, prompting such a firestorm of criticism that he appears to have deleted the post.

"I hope everyone gets the irony of a massive fire in the heart of big oil country," posted Jim Ray of Guelph, Ont.

Prime Minister Justin Trudeau, whose Liberal government has made combating climate change a central theme, was having none of it Wednesday.

"It's well known that one of the consequences of climate change will be a greater prevalence of extreme weather events around the planet," Trudeau said at a news conference in Ottawa.

"However any time we try to make a political argument out of one particular disaster, I think there's a bit of a shortcut that can sometimes not have the desired outcome."

It was a prudent — and political — response.

The sobering fact, however, is that scientists have been warning for at least two decades that a changing climate is contributing to an increase in global wildfire risks and Fort McMurray fits the pattern.

That does not make the city of 80,000 deserving of environmental scorn.

"I find it offensive for people to refer to what's going on to Fort McMurray as some sort of come-uppance," said Andrew Weaver, a climate scientist who now sits as a Green party member of B.C.'s provincial legislature. "The reality is we are all consumers of products that come from oil."

Weaver was part of a research team that in 2004 published a study establishing the connection between a warming climate and increased Canadian wildfires.

But at least as early as 1993, scientific papers were exploring the link between rising carbon dioxide in the atmosphere, global warming and longer Canadian fire seasons.

It's a global phenomenon. A 2015 study in the journal Nature Communications found that between 1979 and 2013 the fire season has lengthened for more than a quarter of the planet's surface vegetation. In South America, the fire season has increased by an average 33 days. Globally, CO2 from wildfires can amount to more than half of all emissions from burning fossil fuels.

Alberta's wildfire season used to start at the beginning of April. Now it begins March 1.

"This is a foretaste of things to come," Mike Flannigan, professor of wildland fire at the University of Alberta, said in an interview Wednesday.

Looking at the annual Canadian fire data shows a series of spikes in area burned, said Flannigan. But using 10-year averages, he said, reveals that about one million hectares of forest burned annually in the early 1970s, a number that's now averaging well over two million hectares.

The three essential elements of wildfires are fuel, ignition sources and weather — with dry, hot weather impacting the quality of the fuel and both the sources and ease of ignition.

Lightning strikes, for instance, increase 12 per cent for every one degree Celsius increase in temperature. Calgary on Tuesday broke a 119-year-old temperature record.

Even when climate change spurs changes in rainfall, said Flannigan, warmer temperatures can cause more evaporation and dryer conditions — a subject he explored in a research paper published last October.

Community pulls together to help evacuees