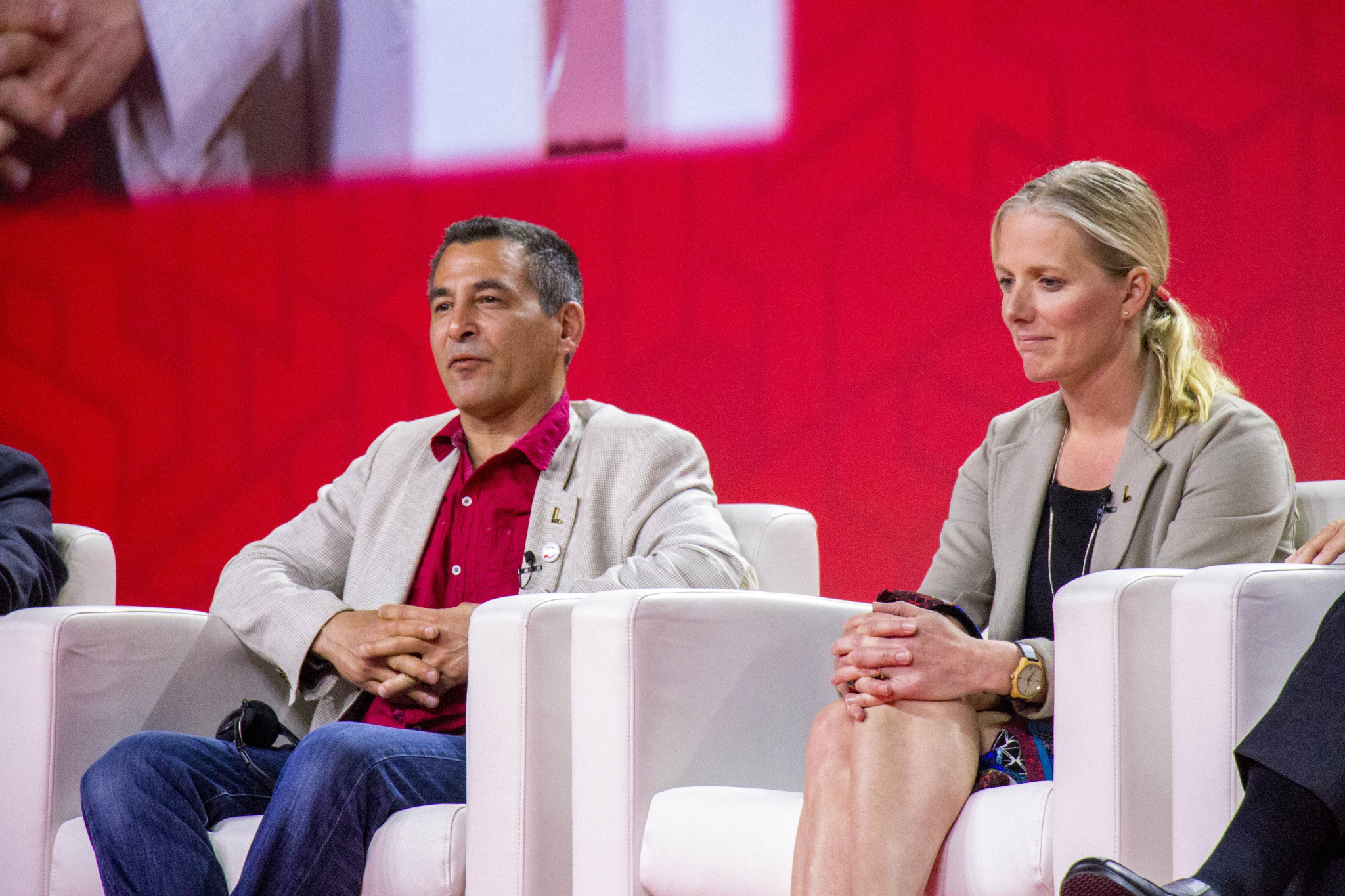 Prior to his resignation as fisheries minister, Hunter Tootoo appeared with Environment Minister Catherine McKenna and other ministers on a panel at the Liberal convention in Winnipeg on May 27, 2016. Photo by Bea Vongdouangchanh.
Previous story
Next story

As he starts his new job as the federal government's new fisheries minister, Dominic LeBlanc will find himself with a mandate to restore the work done by his father to protect Canada's water.

But most of these measures, protecting fish and the habitat they need to survive, were "eviscerated" by the former Harper government, said Amos, a Quebec MP who previously worked for Ecojustice, an environmental law organization.

Since Canadian voters gave the Liberal government gave a mandate to restore those protections, this means that Prime Minister Justin Trudeau will be asking Dominic LeBlanc to redo part of what LeBlanc's father did nearly 40 years ago.

"So Minister Dominic LeBlanc has family experience in the field of Fisheries Act reform," Amos said. "I don't doubt that he will have learned lessons from his father’s experience and I’m really hopeful that (with) the review of the Fisheries Act - particularly after its evisceration by the previous government - I’m really hopeful that we will see the kind of leadership that we’ve come to expect from Dominic LeBlanc on this file."

Of course, this isn't the only family connection in this equation. Roméo LeBlanc was appointed to toughen the Fisheries Act by former prime minister Pierre Trudeau. And now the latter's son, Justin Trudeau, is prime minister, asking the younger Leblanc to do the same thing.

Federal Conservatives, when they were in government, defended changing environmental laws such as the Fisheries Act, saying an overhaul was needed to make it easier for industry to develop resources. The former government said it believed the existing rules at that time had imposed excessive controls that slowed down approvals of new projects and harassed farmers over ditches and puddles.

The Tories defended this position even in the face of criticism from former Progressive Conservative federal ministers who described the changes to the Fisheries Act as a gutting of an important environmental law.

After the Liberals won last fall's general election, Justin Trudeau then gave his first fisheries minister, Hunter Tootoo, a mandate to deliver on that promise.

Although Tootoo had already announced significant new action on a number of different issues, including restoring funding in his department to hire new scientists, he was still working on a plan to fix the Fisheries Act, when he stunned political observers with the news that he was leaving the Liberal caucus and resigning as minister to seek treatment for an addiction.

Amos said he hopes the government moves forward with its agenda, adding that many, including the entire Liberal caucus, were concerned about Tootoo's health.

Trudeau said Tootoo, was the one who decided to leave the Liberal caucus to battle with an addiction problem.

"This is his own choice after a very difficult situation, we will have nothing further to say on this matter," Trudeau told reporters in a short statement prior to the weekly Liberal caucus on Wednesday.

Tootoo announced his resignation from cabinet and the Liberal caucus, only days after he and other Liberals participated in a celebratory convention in Winnipeg - its first major gathering since winning last October's general election.

“As of today, I have resigned as Minister of Fisheries, Oceans and the Canadian Coast Guard and will be stepping down as a member of the Liberal caucus in order to not distract from the important work of my colleagues," Tootoo said in a statement from Tuesday. “I have decided to seek treatment for addiction issues and ask for privacy at this time.”

Trudeau's comments came after several questioned why Tootoo needed to leave the Liberals to battle an addiction problem after the prime minister had openly supported another Liberal MP, Seamus O'Regan, who announced a similar problem in January.

My thoughts are with my friend & colleague @SeamusORegan tonight, and he has my full support.

Please read my statement on the resignation of Hunter Tootoo from cabinet: https://t.co/qzc11mE74e

O'Regan said he didn't know the details of what happened to Tootoo, but was hoping he would get better soon.

​“It’s tough. I can't comment," O'Regan told reporters after the Liberal caucus. "I know absolutely nothing about it and he’s asked for privacy and privacy is what he is owed, so be well Hunter. Get well.”

Tootoo was the second Inuk to be appointed as a senior cabinet minister after defeating Conservative Leona Aglukkaq in the 2015 federal election in the Arctic riding of Nunavut, and has been very active in his role so far.

He had also been told by his department in internal briefings that core science monitoring programs of Canada's oceans had "atrophied" due to the gutting of its scientific expertise. But then he announced a hiring spree of scientists to reverse cuts implemented by the previous Conservative government.

At last weekend's Liberal party convention in Winnipeg, Tootoo participated in a panel about sustainable development with other federal cabinet ministers.

Tootoo was also in the process of reviewing changes to the federal Fisheries Act, a major environmental law that protects bodies of water, that were made by the previous Conservative government. He also a mandate to restore protections in that law that were erased as part of the 2012 budget and the former government's plan to reduce federal environmental oversight of industry and accelerate development of oil, gas and other natural resources.

Dominic LeBlanc is taking over all of Tootoo's responsibilities, in addition to his existing duties as government house leader.

By Elizabeth McSheffrey | News, Politics | May 31st 2016
Race to a Safer World