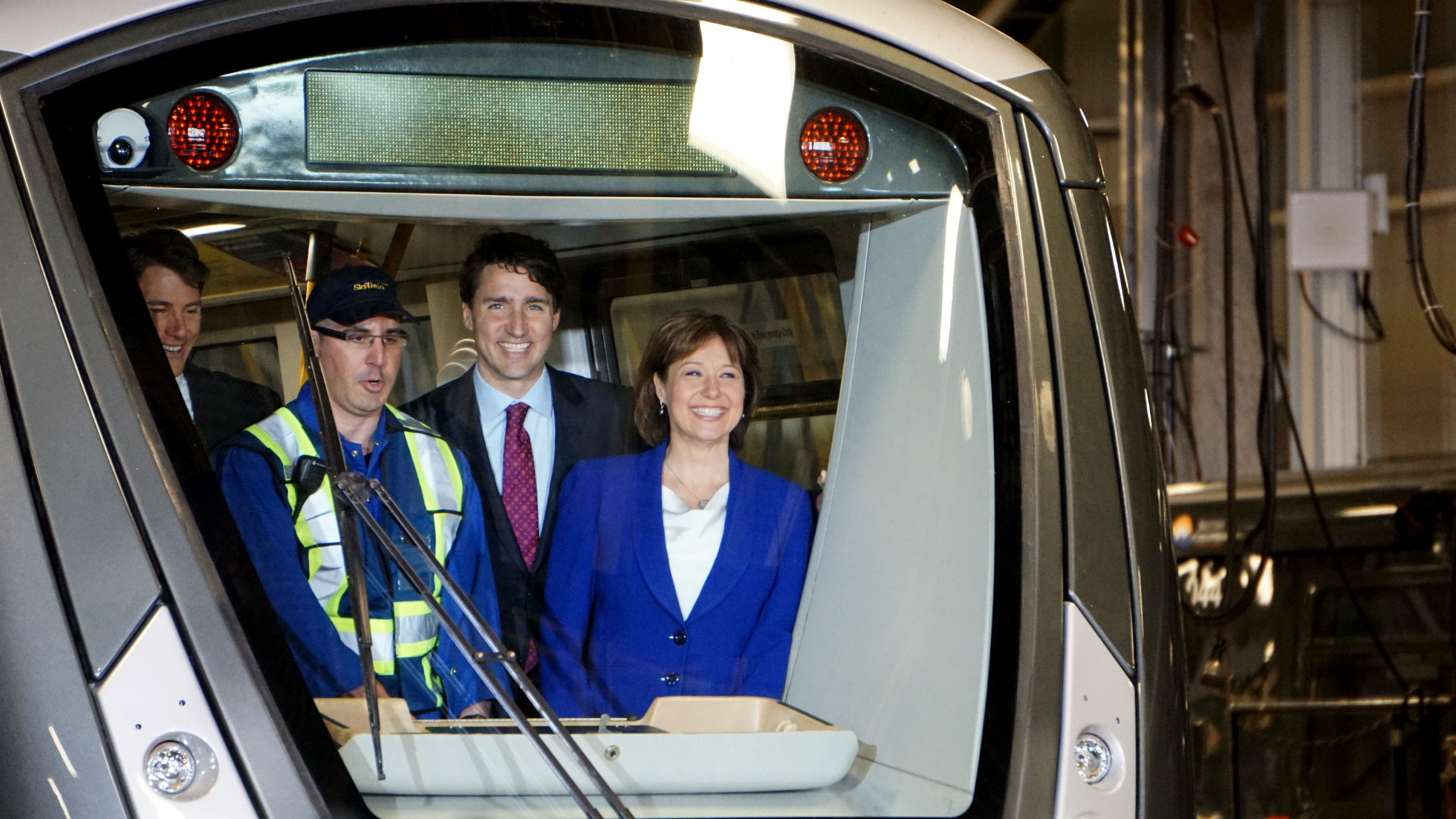 British Columbia will be the first province to officially receive highly-coveted federal infrastructure dollars to spend on public transit initiatives of its choosing, after a $460 million funding announcement in Burnaby, B.C. on Thursday morning.

Prime Minister Justin Trudeau and B.C. Premier Christy Clark made a dramatic entrance on the SkyTrain at its local operation centre, where a host of mayors, members of Parliament, and MLAs were gathered to hear the good news. The federal government's investment — combined with funding from the province and municipalities — brings B.C.'s pot of public transit money to $934 million in total.

"For too many years, the federal government has been a less than active partner, under-investing in public transit," Trudeau told politicians, journalists, and dozens of B.C. TransLink staff.

"This investment in public transit will help the people of British Columbia get home to their loved ones faster. It will also help to grow the middle class by improving business flows in municipalities while reducing environmental damage."

The cash will go towards upgrading existing transit infrastructure, including renovations to aging transit stations and building new bus lanes. Roughly $370 million of the funding has been earmarked for projects in Metro Vancouver, and thanks to the new investment, Vancouver Mayor Gregor Robertson said the Broadway subway line in Vancouver and a rapid transit project in Surrey are expected to break ground within 18 months.

Other projects on the horizon include new rails cars to increase SkyTrain service from all of its lines and a new SeaBus to add to the fleet.

And the cash could not have been more timely — earlier this month, the David Suzuki Foundation published a report that found B.C. public transit has been chronically underfunded by the provincial government since 2008. Gridlock in the metropolitan city is estimated to cost more than $1 billion per year in lost efficiency.

This time around, the province's contribution adds up to $308 million over the next three years with the goal of cutting down on congestion and air pollution.

“This announcement today is going to make sure people don’t spend all those extra hours on the road when they could be spending that time with their kids and the people that they love rather than getting stuck in traffic commuting," said Clark.

"It is going to make a huge contribution to one of British Columbia’s biggest priorities, and that is fighting climate change as we make sure more people can find their way in environmentally-sound transportation to get to and from work and the places they need to go every day."

For decades, municipalities have been forced to front more than half of the cost of capital upgrades, but new deals reached between the provincial and federal governments has Ottawa providing 83 per cent of the balance. It's a measure designed to relieve the burden on cash-strapped local governments and Canadian taxpayers.

The funding constitutes the first phase of Ottawa's $120-billion plan to support infrastructure across the country over the next decade, and involves $10 billion in immediate investments in public transit, green and social infrastructure projects. The cash has also been made retroactive to April 1, 2016, which means projects can proceed without delay at the peak of construction season.

The second wave of infrastructure initiative will be announced over the next year.