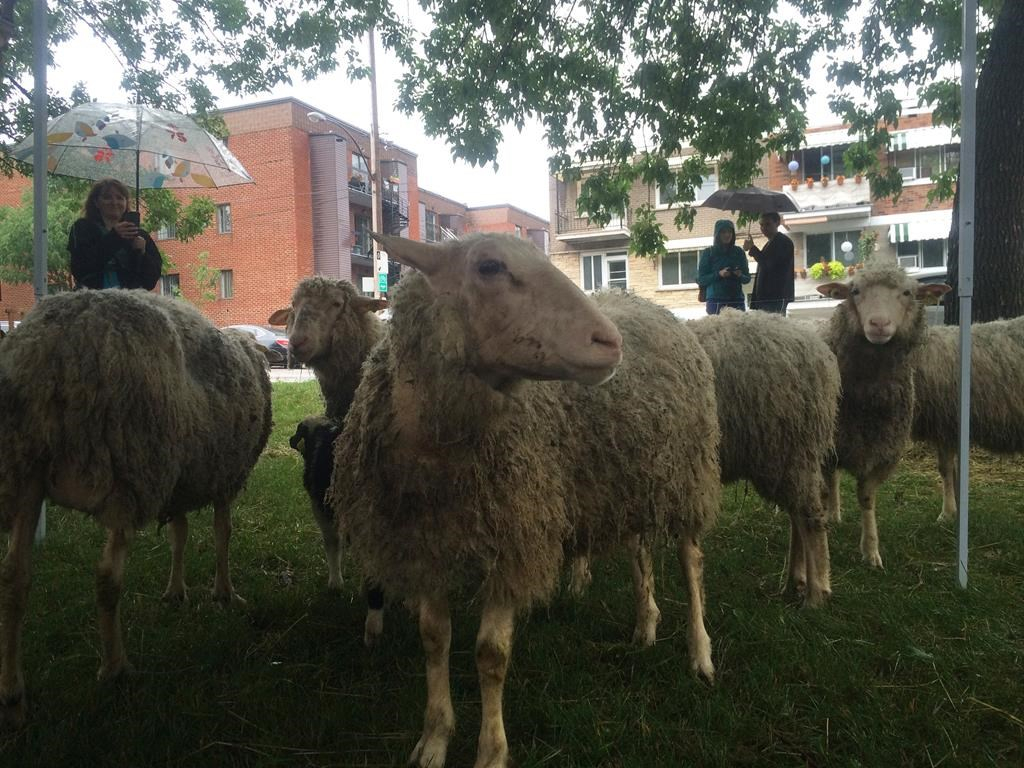 Montreal introduced the six ewes and two lambs that will serve as environmentally-friendly lawnmowers for the next month as part of an urban agriculture pilot project, in Montreal on Saturday, July 9, 2016. Photo by The Canadian Press.
Previous story

A Montreal park has a new lawn maintenance crew for the summer, and they're a pretty woolly bunch.

On Saturday, the Rosemont-La Petite-Patrie borough introduced the six ewes and two lambs that will serve as environmentally-friendly lawnmowers for the next month as part of an urban agriculture pilot project.

Grazing animals have some ecological advantages when it comes to landscaping, said Marie-Eve Julien-Denis, one of the project's organizers.

"They will enrich the soil with their manure and contribute to urban biodiversity, because insects and birds won't be bothered by the noise of lawnmowers," she said.

Sheep and goats have been used to manage green spaces and parks in Europe for centuries, and the idea is beginning to catch on in Canada as well.

Last month, Calgary introduced 106 goats to a city park in an experimental effort to wipe out thistle and other noxious weeds.

On Saturday, the small Montreal flock settled into their job quickly, seemingly undisturbed by their new urban surroundings or the dozens of curious onlookers who braved the pouring rain to welcome them.

It won't be all work, though: the sheep's schedule over the next month also includes picnics and even yoga sessions with local residents, though Julien-Denis would not elaborate on what role the sheep would play. She also said there would be weekly strolls to other nearby parks.

The group running the project will also be holding educational workshops to teach Montrealers about cheese, wool, and urban agriculture, and to give them a small peek into where their food comes from.

"Not everyone gets the chance to visit a farm or see animals," Julien-Denis said. "This is a bit of an open door onto a farm."

The small herd will be supervised 24 hours a day by two shepherds, and will spend their night in a small building set up as a sheep fold.

Borough mayor Francois Croteau said his administration has been gradually trying to bring agriculture back to the city, beginning with a community henhouse a few years ago.

"We want to show it is possible, step by step, to reintroduce agriculture in Montrealers' daily way of life," he said.

Although the herd of sheep will be heading back to a farm outside the city after a month, Julien-Denis hopes the project can be expanded to more parks next year.

Her ultimate dream, she said, is to make "the first-ever Montreal sheep's milk cheese" -- hopefully in time for the city's 375th birthday next year.