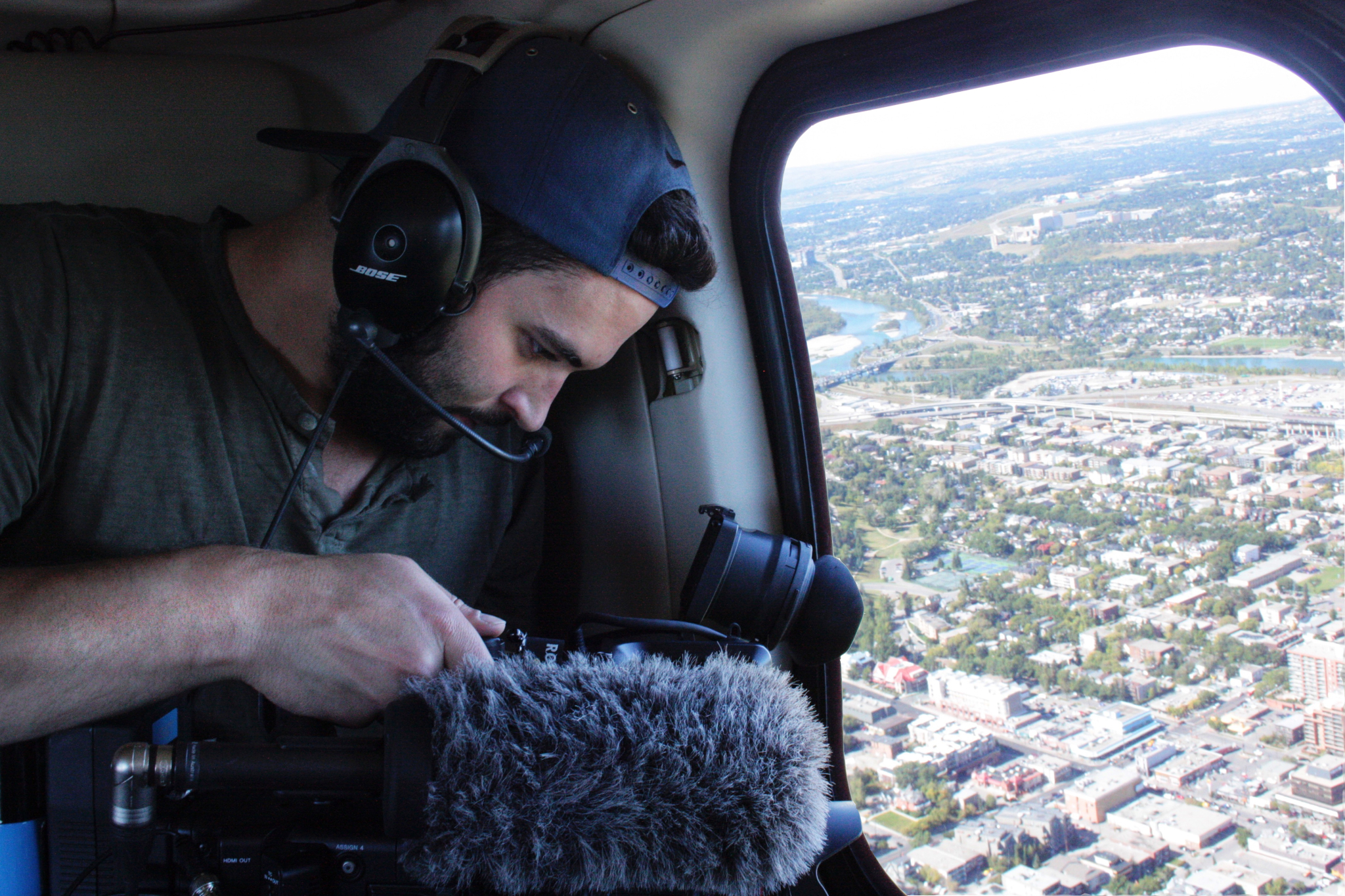 A biologist calls it the "jelly head phenomena."

It happens when a wolf's neck gets caught in a trapper's snare.

Unable to free itself, the noose slowly cuts off circulation from wolf’s head to its heart.

The blood just keeps going into the head. Then the brain swells up until the wolf’s head explodes.

Day's film - Unnatural Enemies: The War on Wolves - has just won a Genesis Award for an International TV documentary from the Humane Society of the United States. Using graphic depictions like the "jelly head," the film portrays how Alberta made its wolves out to be the scapegoat in the disappearance of caribou from the province's boreal forest in an increasingly industrialized landscape cut through with logging and oil and gas development.

The award places Day alongside the likes of Leonardo DiCaprio, Anderson Cooper and the Daily Show, all previous recipients of the honor.

The Genesis Awards have been handed out for 30 years. They reward news productions and public figures for raising awareness of animal issues in a variety of media.

According to Paul Frame, Alberta's Provincial Carnivore Specialist, people react to wolves emotionally, rather than with logic or in any practical or realistic way, compounding the difficulty of managing the wolf cull. "Wolves polarize people more than any other species," he tells Day in the film.

The documentary is an eye-opening look at the way Alberta persecutes wolves, ranging from its government sanctioned wolf cull to hunters and trappers who pursue municipal bounties offered on the animals.

In Alberta, the wolf cull began in 2005 in the Little Smoky Region of the province in an attempt to save the endangered woodland caribou.

As in British Columbia, the Alberta government employs snipers in helicopters to shoot the wolves.

One of the biologists in the documentary noted that the average cost of gunning down a wolf from a helicopter is an an astonishing $3,000 per animal.

Nor is firing on the wolves from above fool-proof. Because it’s difficult to hit a moving target from a moving object in the sky, many of the kills aren’t clean, leaving a number of the wolves wounded and suffering before they die, an animal advocate notes in the film.

In fact, Alberta’s cull - and its overall treatment of wolves - is remarkably cruel.

The province also uses strychnine-laced bait to kill wolves. The poison is slow-acting. It can take over an hour for a wolf to die and it will undergo as many as eight convulsions in the process.

Besides the use of aerial gunners to hunt down the wolves, another similarity between Alberta and British Columbia’s wolf culls is the loss of habitat.

While environmentalists say these disappearing forests taken over by industry are responsible for the caribou's decline, both provincial governments pin the blame on wolves.

At this time, the Alberta government doesn't know how the wildfires burning near Fort McMurray will further impact the wolves or the caribou. Alberta Environment and Parks has said that it plans to conduct a wildlife survey once it's safe to do so.

In Alberta, Little Smoky was originally proposed as a boreal wilderness park in the 1980s. The area is located between Hinton and Jasper National Park along the front ranges of the Rocky Mountains.

Instead, the province opened the area up to logging and issued oil and gas leases. Today the region is riddled with access roads, oil and gas plants, wells, pipelines, seismic lines, and clear-cuts.

If the government “really cared about the caribou - which I don’t believe - they would be doing something about habitat," said Kevin Van Tighem, a naturalist, author and one-time Banff Park superintendent, in the film.

Tove Reece, an animal rights activist, opined: “Is the provincial government and the federal government going to put a moratorium on oil and gas? It’s not going to happen. So instead we scapegoat the wolves.”

Trailer for Unnatural Enemies: The War on Wolves. Video from YouTube

The film didn’t just focus on the provincial wolf cull. It also looked at bounty hunting and trapping, which the municipalities encourage.

One biologist estimated some $300,000 has been paid out to date in bounties. There’s no bag limit and wolves can be hunted in all seasons.

One popular technique for catching the wolves is the use of snares, the same ones that can produce the jelly head phenomena. Once snared around the neck, wolves can still live for up to two days, in some cases beyond.

According to Gilbert Proulx, a wildlife biologist, the animals have a muscular structure, trachea, and blood system that doesn’t allow them to die quickly with a snare.

“The snare cannot strangle it to death because through the gasping behaviour the wolves will maintain some air exchange with their brain.”

Trapped by snares, the wolves can freeze or starve to death, or become prey to other animals. Wolves will also chew their way out of the snare. Biting at it, they frequently break their teeth, which in turn means a slow death from starvation.

If they escape, it’s still with the snare around their necks. All the while, the snare keeps slowly tightening, working its way through the hide and the flesh of the wolf.

Day said he was inspired to produce the film after reading Van Tighem's book, The Homeward Wolf, in December 2014. As he learned more about the cull and bounties, the film-maker said he was shocked, but also curious to learn more.

The use of strychnine in poisoning the animals particularly dismayed him. He heard stories about wolves going blind and convulsing and one animal running off a cliff after it went blind.

“I was shocked how inhumane that is.”

Day made the film quickly because he wanted to complete it before Alberta’s most recent provincial election. The film first aired on CTV last May. Then CBC’s documentary channel picked it up. It’s also been screened at a few festivals.

Day, 25, said he grew up in a household inundated with film. Both his parents were film reviewers in Calgary, who did a television program called The Movie Show. Their show was one of the first of its kind in Canada.

The 25-year-old took broadcasting at Mount Royal College in Calgary and then attended film school in Toronto. Since graduating three years ago Day has made a number of documentaries.

“As long as I remember I’ve just wanted to do that.”

One of his most recent ones was Goalie: Life and Death in the Crease. That film focuses on Clint Marlarchuk, a goalie for the Buffalo Sabres, whose throat was slashed by a skate in the middle of a NHL game.

Based on Malarchuk’s book, The Crazy Game, the documentary followed Marlarchuk’s battle with post traumatic stress disorder after the accident.

“When he got PTSD, it triggered a lot inside him and made him more of an abusive person. He sort of flew off the rails. We used his narrative as a way of making a film about mental illness and abuse and that cycle of abuse as a result.”

While Day believes his wolf cull documentary has had some impact, he was hoping it would have more.

“I was more optimistic when we got an NDP government here in Alberta that change would occur. It doesn’t seem to be much of an issue and I’ve been trying to get the Minister of the Environment to see it, but so far I don’t know that she has.”

Van Tighem’s final opinion of Alberta’s war on wolves? “You can’t kill yourself out of a wolf population.

“There will always be more wolves. They’ll keep coming back until we learn to manage ourselves and them a lot more intelligently than we’ve done to date.”