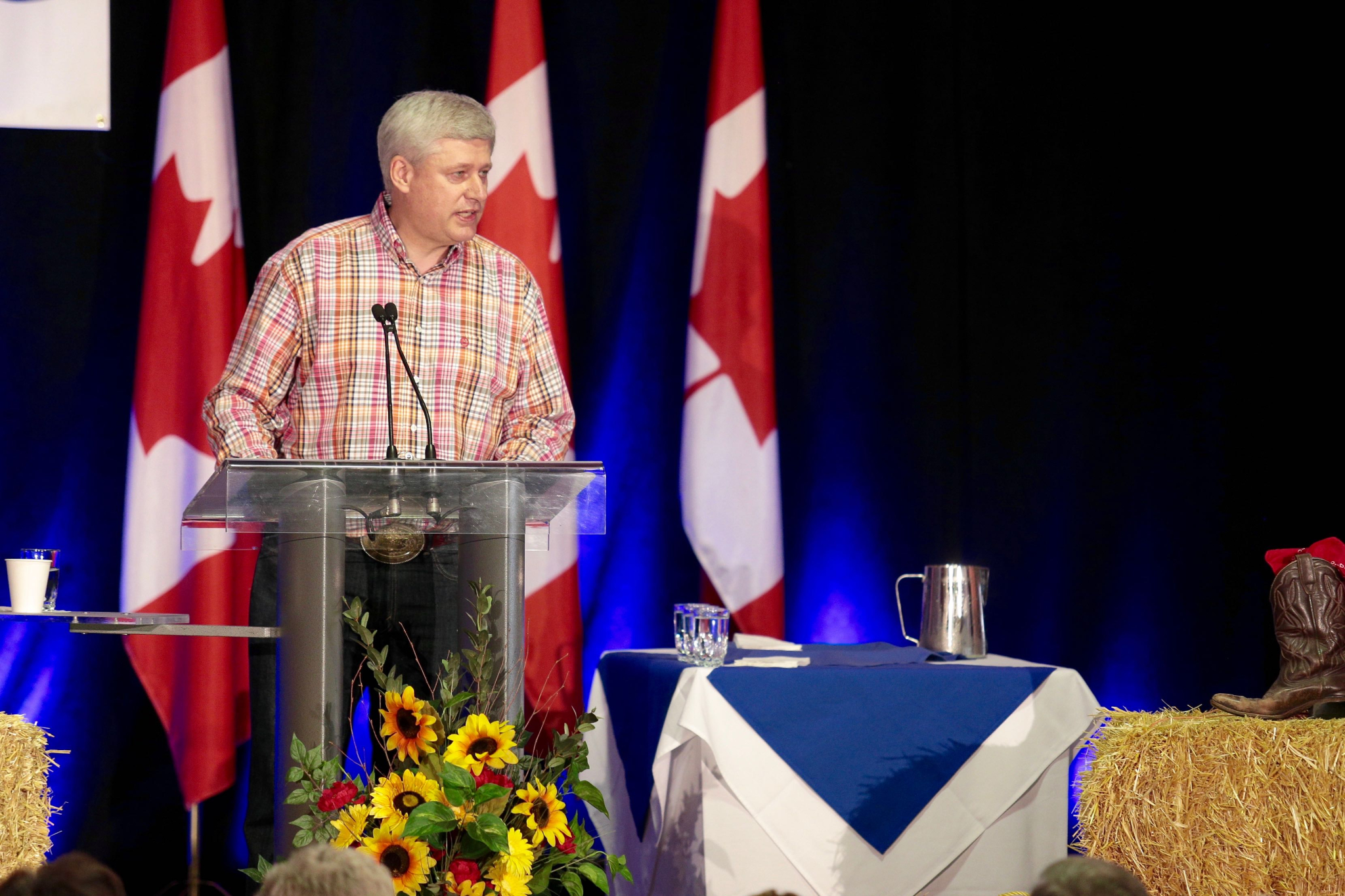 An emotional Jason Kenney said he was moved after receiving a powerful endorsement in his new bid to lead Alberta's Progressive Conservative Party.

The thumbs up came from former prime minister Stephen Harper who endorsed the former federal minister at a Conservative fundraiser on Saturday evening during the Calgary Stampede.

Harper has made few public appearances since his defeat in last October's federal election and his brief remarks at the $200-per-ticket fundraiser could go down as his last significant message before he is expected to leave federal politics later this summer.

"Friends, I would ask you tonight, I would ask all of Alberta's members of the Conservative Party of Canada to join me and work to elect as the next leader of the PC Party, the Honourable Jason Kenney," Harper said.

The event contrasts with Harper's last annual visit to Stampede when he was still prime minister and about to plunge Canada into a marathon election campaign that he would later lose to Prime Minister Justin Trudeau's Liberals.

Kenney said he was "delighted" to receive Harper's "unequivocal" support, calling the former prime minister's unification of the Reform Party and Conservative Party in 2003 the model for his own plans to unite Alberta's right-wing parties.

"It's actually a bit moving for me," Kenney said. "I've been with him in the trenches for a very long time. To hear those words from him in what is probably his last political speech as an MP is very touching."

Harper said his party isn't one kept afloat "by union money, by corporate donations, media hype, or extensive taxpayer subsidies," and that he believes Wildrose Party supporters want unity and "positive change" for the province.

Kenney told reporters that he doesn't "expect unanimity either for my candidacy or the project of unity," but he likes his odds.

"I don't think even the most cynical journalist could spin the endorsement of the longest-serving conservative prime minister this century and the leader of the Conservative Party as anything but fantastic news for what I'm trying to do."

Interim federal Conservative Leader Roma Ambrose said she's been "unabashedly supportive of the unite the right movement here in Alberta" for over a year. She threw her own hat in the ring for Kenney, saying he's the right person for Alberta's conservatives to unite behind.

"I am incredibly proud and happy that Jason has stepped up to lead this movement and I am behind him 100 per cent," Ambrose said in a scrum before the fundraiser.

She declined to say whether she would support his eventual bid for premier should he win the leadership. She said that would be up to Albertans to decide and that "there's a lot that has to happen before we get to the next election." She won't publicly campaign for his leadership bid either, saying she has "a lot on my plate," and that the individual MPs in her caucus would be free to decide whether to support anyone.

She also wished Alberta's conservative leaders all the best in their bid to unite the right. 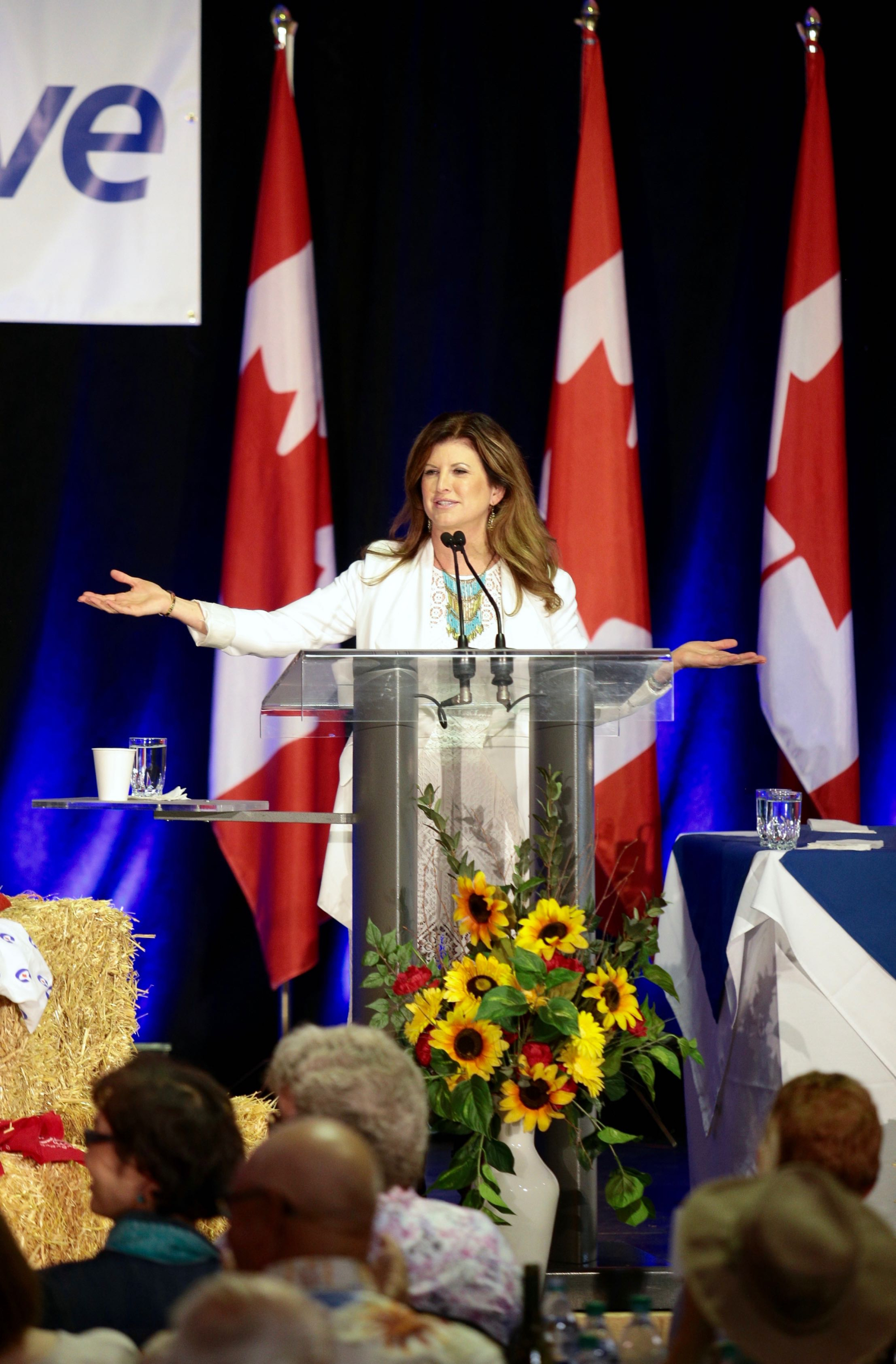 She said she is "100 per cent behind the unite-the-right movement in Alberta," and that conservatives have to create an "unstoppable path to victory" if they're going to wrestle control back from the NDP.

Speaking later to the crowd, she even joked that she had invited Wildrose Party Leader Brian Jean and Alberta's interim Progressive Conservative Leader Ric McIver to stay at Stornoway — the residence of the federal leader of the official opposition in Ottawa — and suggested they stay in the same room.

"I told the two of them they could have the room with the bunk beds," she said, with both men listening in the audience.

Ambrose also criticized Russia's military incursion into Ukraine as well as Alberta's carbon tax, adding that the province's economy is in dire straits. She said she has "seen grown men cry, humiliated because they lost their job."

Ambrose also thanked Interim leader McIver for his leadership of the Alberta Tories following its crushing electoral defeat in 2015, which ended 44 years of Cosnervative rule in the province. The PCs, then led by former Conservative MP Jim Prentice, were relegated to third-party status in a sweeping election victory for Premier Rachel Notley and the province's New Democrats.

Kenney said that he's spoken to both McIver and Jean since his announcement, and that he'll meet with the Wildrose Party leader again in the "near future."