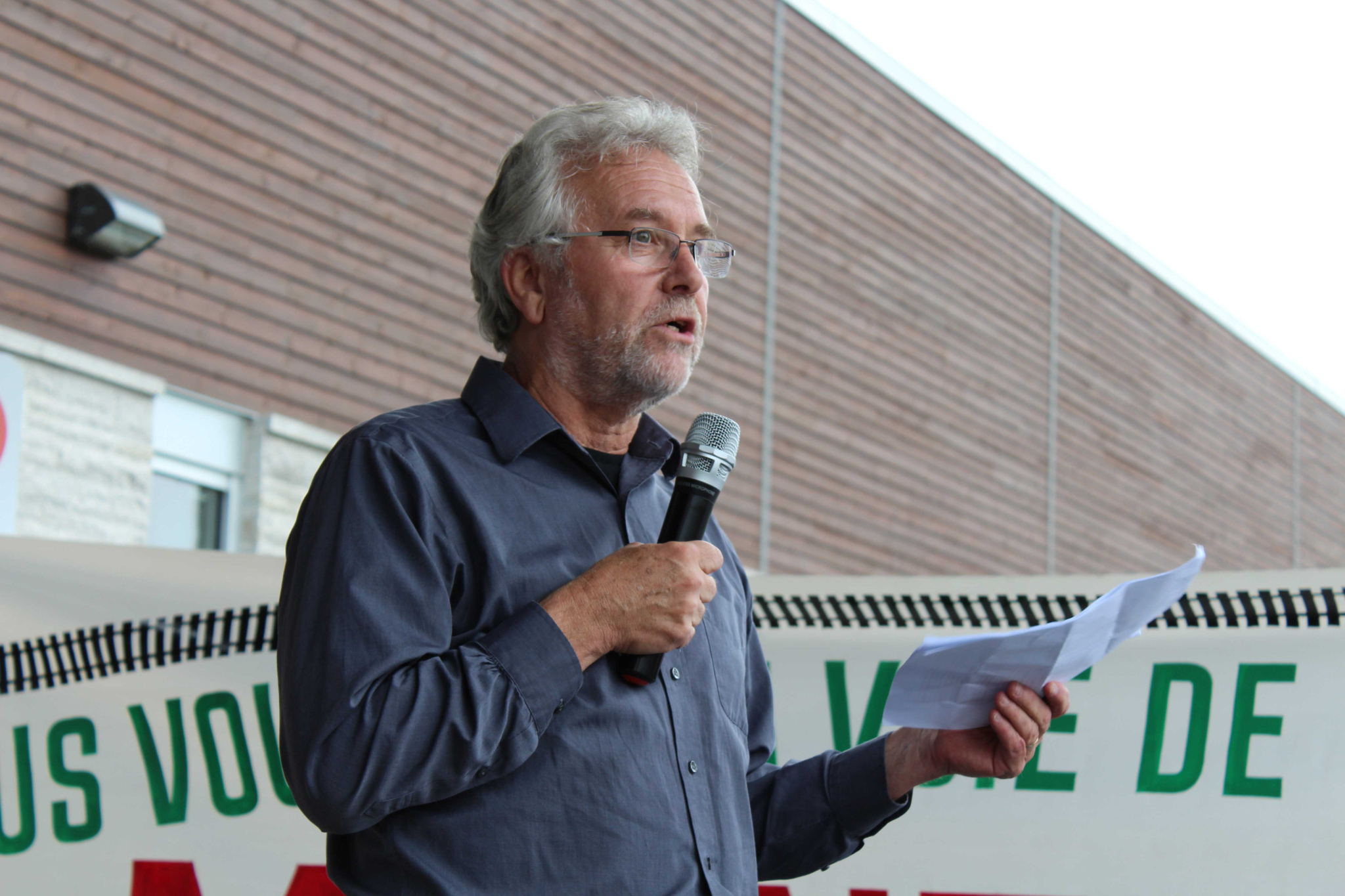 Editor's note: This op-ed was part of the speech delivered by Bruce Campbell at a rally held in Lac-Mégantic on July 12, 2016.

Like millions of other people, I watched in horror what happened three years ago here in Lac-Mégantic. I suspected regulatory breakdown was responsible, and I was concerned that the official story would try to obscure the causes…as had happened in other disasters. My goal was to offer an independent perspective.

Regulation is at the heart of what government does. I have been deeply concerned about deregulation over the last 25 years and the growing risks to public, health safety and the environment.

As I began my analysis, I learned that my work colleague's cousin, Pauline Begnoche and her husband Gaston, had lost their daughter Talitha and two young grandchildren Bianca and Alyssa, in the disaster.

My research thereafter took on a whole other dimension. I recently met Pauline and Gaston. It was one of the most heart-wrenching experiences of my life.

I produced three major reports on the disaster for the Canadian Centre for Policy Alternatives and numerous media commentaries.

Three years after Lac–Mégantic tragedy I ask myself. Have the lessons been learned? Has it led to fundamental improvements in the rail safety system? Apart from some modest improvements, the answer is No.

Massive oil trains are continuing to run on increasingly overstressed and under maintained tracks, through urban areas, sometimes at excessive speeds. Main track derailments of trains carrying dangerous goods are increasing. CP Rail just laid off 500 track maintenance workers and they did so without having to provide a risk assessment for Transport Canada. Plus ca change.

Nor have train securement issues been fixed. The number of runaway trains is increasing.

The more advanced tank car models (CP-1232) carrying dangerous goods keep puncturing and their oil exploding–very recently in the state of Oregon where a disaster was narrowly averted.

These unsafe tank cars will be allowed to continue carrying volatile oil through towns and cities of North America until 2025, when they're supposedly stronger replacements (TC-117) are fully in place.

Rail oversight measures, essential to a safe regulatory system–notably frequent on-site inspections–are still grossly inadequate. Without them, companies are still in practice regulating themselves: compromising safety when it conflicts with costs.

A barrier to improved rail safety is the “cozy” relationship between Transport Canada and the powerful rail industry. Far too often, the industry is able to shape regulations to its own the benefit while compromising the public interest. It can block or delay new regulations, remove or dilute existing regulations, which it considers, adversely affect its costs.

Relations between Transport Canada and the rail industry continue to be shrouded in secrecy. Communication with municipalities about the dangerous goods travelling through their communities is still problematic.

Transport Canada regulatory agencies continue to be lacking resources necessary to stand up to industry.

Governments tried to obscure rather than illuminate causes of accident

I ask myself another question. Have the fundamental causes of regulatory failure behind Lac–Mégantic been fully brought to light? Again I have to say the answer is no.

Governments have sought to obscure rather than illuminate the root causes behind the accident.

The 2014 Transportation Safety Board report was the most comprehensive. Government wants it to be the last word. It found regulatory breaches at Transport Canada and negligence by the company, MMA. But its finding of 18 causes and contributing factors, treated Transport Canada surprisingly lightly, raising questions about the influence of the industry, the Department and the political level, in massaging its findings.

The most notable omission was that the existence of a single train operator was not listed as a cause of the accident. However, it was listed several times as a cause in draft versions of the TSB report. I’ve seen these drafts. Why was it erased? Who wanted it removed? Who was being protected?

Why was MMA, a company with an atrocious safety record, allowed to operate its trains with a single operator despite opposition from the union, from Transport Canada officials at the Montréal office, and despite Transport Canada-commissioned report by the National Research Council, which raised red flags and cautioned against proceeding before a two-year pilot project was completed.

Canadian Pacific denies responsibility for any role in Lac-Mégantic disaster

Trials are an avenue for uncovering truth. Civil suits have resulted in a settlement, shielding the defendants, including the federal government, from further legal action. Canadian Pacific continues to deny any responsibility for its role in the disaster, and thus civil actions will continue…likely for years

The criminal trial of three frontline employees continues to be delayed. Neither the US parent of MMA, its majority owner or senior executives have been charged. We all know that the worst offenders have escaped prosecution.

And why have senior government officials and politicians, oil and rail industry executives, evaded responsibility? They who looked the other way in face of the mounting risk of massively growing oil shipments.

You have called unanimously for a new rail line to bypass the town centre. Feasibility studies drag on. The federal government continues to waffle. It should commit immediately to building the bypass.

Furthermore, the government should finally admit its own culpability in the disaster– for the catastrophic breakdown of a system that was supposed to protect you.

You have called for an independent judicial enquiry. Other major disasters in Canada have had judicial inquiries. Why are you being denied this?

You want to insure that the truth behind the disaster is brought to light; that there will be fundamental improvements in rail safety so that no other community will have to go through what you've gone through.

Lac-Mégantic exposed and shattered the myth of corporate self-regulation. Corporations cannot regulate themselves. Their first loyalty is to their shareholders not the protection of public safety. That is the duty of government.

I’m concerned that efforts over the last three years to restore public confidence in rail safety have never fundamentally challenged this myth of corporate self-regulation.

I hope that Canadian public will not be lulled, as the years pass, into forgetting that corporate self-regulation was at the heart of this disaster.

The people of Lac–Mégantic will most certainly not forget.

We should never let them forget.

To whom it may concern.

To whom it may concern.
I have been following the Lac Megantic incident and have gone to Transport Canada with many questions and most unanswered. Now the reason I have been pursuing this investigation is because of my background. I have a total of 23 years in health and safety and including in that 23 years is 14 years in the Transportation of Dangerous goods which includes teaching the regulations regarding the packaging, classification, shipping, transporting of dangerous goods by road, rail, air, and marine.
In my training as a safety manager, I was always told and totally agree that we need to get to the root cause of any incident and especially this one that killed 47 people. This can take quite a while but the effort is worth not having a repeat incident yet we already have but just without no deaths. In Safety I have always said that if you think about an incident happening then it will happen at some. Law of averages. This, at least, in my opinion, has not been done. A fine report by the TSB but its not complete. There are number of regulations at play here and the only one that seems to have been presented as a problem is the Railway Act. As mention the railcars come under the Railway Act but also under the Transportation of Dangerous good Act, as per section 5 of large Means of containment. I have been involved in the transportation business my whole life, almost 50 years and I can tell you, at least with what I have read that many question have been omitted especially with the Transportation of Dangerous Goods. I don't know how to approach the media so I can pass on my knowledge and my questions to have this incident investigated properly. After following the media only on this incident I find that there appears to have been a lot of players involved. Easy to confuse those outside. If anyone has interest in this incident I would be please to speak out. I have no agenda except to make the unknown known to all. I have the relevant questions that have not been reported by media.

Thank you so much for your comments, Mr Gagnon!

If no one has answered you yet, do write to me, [email protected], so we can share some information, contacts and literature.
Yours regards,
AB
Member of the Coalition for rail safety and of the Citizen Comittee of the lac Mégantic area
Lac-Mégantic

Hi Victor,
Please email me at [email protected] . Perhaps we can further the story on Lac-Megantic with your insight.

Mr Campbell has shown a

Mr Campbell has shown a excellent example of how safety is taken out of context. The risk or threat is never really measured properly, its like not having your criminal record available to identify you in court. This evidence of a negligent attitude and behavior is never brought to the light of a court room. The employees have been ignored at all cost they knowingly work with fatigue, risk, substandard everything as they have no voice or way to contribute to the one sided narrative like corporations are allowed to present. We are at a point of which not only are the corporation criminally negligent many authorities and courts are violating criminal law for failing to stop the manipulation of evidence presented to court . This tactic was implemented during Westray trial as the crown prosecutor committed malice by withholding evidence in the trial. It has been the key to manipulating justice every since. Under the provincial Ministry of Labour in Ontario the Joint Health and Safety Committee Process is where most the negligent behaviors is covered up .The conflicts if the worker rep,a single person shows any resistance or fights to have protocol followed by their employer, all the violations of rules procedures and protocol are never revealed to anyone other than the committee. As a matter of fact the Occupational Health and Safety Act OHSA prohibits the MOL from collecting this information as the Management safety representative is given immunity for his actions clause 65(1) of the OHSA. This is the opposite of how we are viewed as civilians in court by the police .If you create risk as an intoxicated driver you are fined and criminally convicted for exposing the public to a threat or risk. You haven't even hurt someone yet. This conviction fallows you as evidence in the courts for life. For corporations its like a first time offence with no history of conduct presented, every time they kill someone at work its presented like a surprise to everyone who worked there .
Sadly the crown finds this ok as the corporate safety system is considered a high standard of safety of the employer that is allowed to raises doubt to avoid a conviction. This, reveals they trust industry to be honest with no oversight of the process or cross examination of employees to confirm all rules, regulations and auditor procedures are followed properly.