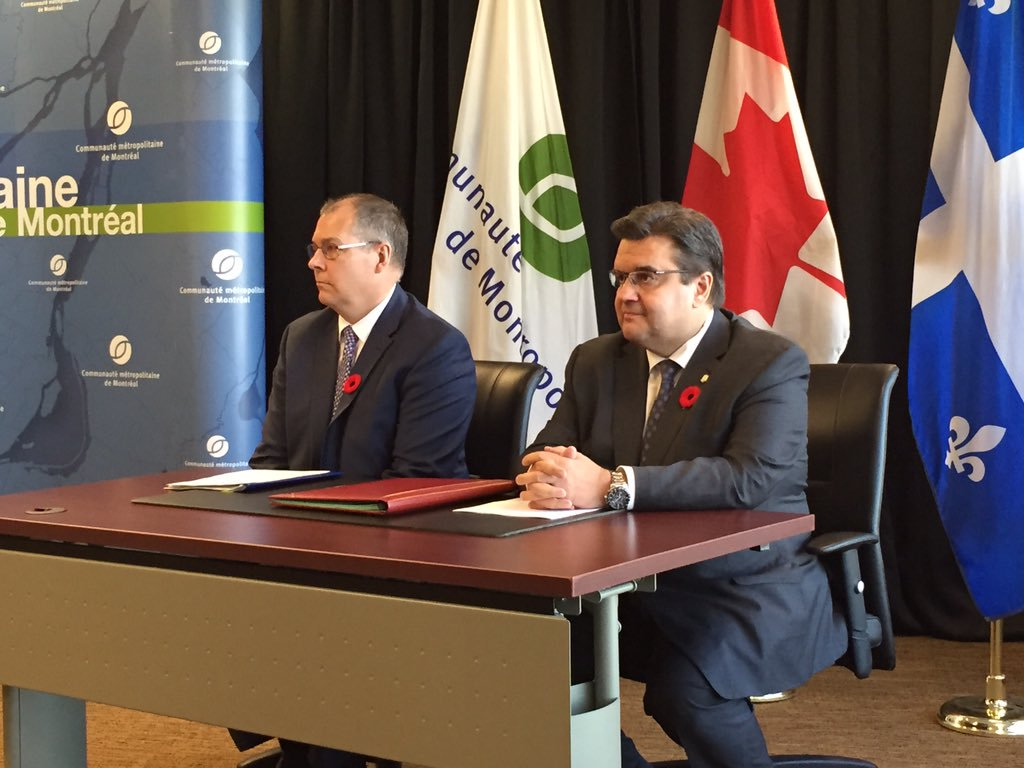 It was January 2015, and three of the highest-ranking officials at Canada’s national pipeline regulator were working on a communications plan to woo Quebecers by using the popular mayor of their largest city.

Lyne Mercier, the vice-chairwoman, Josée Touchette, the chief operating officer, and Tom Neufeld, the vice-president of communications from the regulator, the National Energy Board (NEB), were all in on the scheme, crafting the plan in their Calgary offices.

“As requested, Josee, Lyne and I came up with a media plan for Friday,” wrote Neufeld in an email sent on Jan. 13 to his boss, Peter Watson, the president and chief executive of the NEB.

“I spoke with the Mayor’s Communications person this morning, and the Mayor is keen to have a media event/press conference after your mtg with him. In fact, the Mayor told the media today that you will be meeting… with him on Friday. So the press conference will feature, the Mayor, Lyne and yourself making some comments and then answering questions.”

Later on in the email, Neufeld told Watson about another unusual detail regarding his private discussions with the office of Montreal Mayor, Denis Coderre.

“Full disclosure, when the Mayor’s office asked what ‘news’ would be worth having a press conference on, I mentioned that the NEB has announced an office in Vancouver, and we are considering an office in Montreal - but the final decision has not yet been made - and will only be finalized on Friday morning (ahem)."

It’s not clear whether the mayor, Coderre, was aware of what the NEB was saying behind the scenes.

The NEB says it never tried to mislead Coderre. But for the officials from the Calgary-based pipeline regulator, the joint photo-op with the mayor, eventually held that Friday, Jan. 16 in 2015, was an important step in a carefully crafted communications plan. The strategy also involved holding a series of meetings in Montreal, including one with former Quebec premier Jean Charest, to brainstorm about ideas to promote the fossil fuel industry and pipelines in a region that is largely opposed to big oil.

The NEB has all the powers of a federal court, along with a mandate to review and oversee pipeline and other major energy transmission projects, within its federal jurisdiction, in a fair and impartial manner.

As the regulator prepares to roll into Montreal again next week, this time for controversial hearings on the proposed 4,500-kilometre Energy East oil pipeline, new details have emerged about the unusual 2015 trip that have led to an explosion of allegations that the regulator is biased and rigging the game in favour of massive expansion of western Canadian oil production. The allegations prompted Mayor Coderre to call for a suspension of the proceedings on Thursday, and strong hints that he was negotiating directly with the regulator to prevent things from getting out of hand.

The NEB has accepted the criticism, but says its objectives of the meetings were to improve engagement with the people of Quebec.

Board member Jacques Gauthier, who along with Watson and Mercier, participated in the meeting with Charest, has been under fire for initially accepting an email from the former premier’s office on a personal email account and then inviting Charest to privately discuss Energy East, outside of the formal hearing process. Lawyers from environmental groups in Quebec and Ontario have asked Gauthier and Mercier to recuse themselves from the hearings, and the latest revelations, showing that Mercier was involved in crafting a communications plan, could add fuel to the fire.

Up until now, the NEB has said it will consider these requests for the recusals in a few weeks, but plans to proceed in the meantime with its review of Energy East, led by Gauthier, Mercier, and presiding Board member Roland George.

Carole Dupuis, coordinator of a Quebec anti-fossil fuels group, the Regroupement Vigilance Hydrocarbure Québec, who reviewed the documents released to National Observer through access to information legislation, said she felt it was clear that they showed the NEB was trying to use the mayor as a prop. She said it should instead be focusing on its mandate of regulating the pipeline industry, instead of marketing pipelines.

“Why is a tribunal doing public relations? What is this?” she asked. “I think the population is much more sophisticated and sees beyond these games."

But speaking to reporters on Friday, Coderre praised the board for setting up the office in Montreal, saying that it has been instrumental in helping ensure the NEB was addressing safety concerns raised by municipalities regarding the recent Line 9 reversal project, an Enbridge crude oil pipeline that also goes through the Montreal region.

Coderre not only represents Montreal, but he is also president of the Montreal Metropolitan Community (CMM), which represents 82 cities in the region.

“As president of the CMM, as mayor of the city of Montreal, we have a fantastic agreement with the National Energy Board," he said. "I praised Peter Watson for his way of doing things. We signed an agreement. It was a first. There was a decentralization of a federal organization that got out of Calgary, that created an office in Montreal and in Vancouver. It’s not just there (in Montreal) to have a francophone representative to answer your (media) questions."

The NEB also notes that it continues to work with the mayor and other local elected officials in Montreal.

The new multimillion dollar NEB regional offices in Montreal and Vancouver were created under the watch of the former Harper government, as residents in both cities became increasingly concerned about major pipeline projects such as Energy East and Kinder Morgan’s Trans Mountain pipeline expansion project on the west coast.

The two offices were initially supposed to have an initial budget of about $3 million over three years. These numbers were based on a memo that was sent to chief operating officer Touchette, from NEB executive vice president of business integration, Paula Futoransky, on Jan. 27, 2015. This would include $162,272 in set-up costs followed by $707,196 in operating costs for 2015-2016 and then $1.26 million to $1.44 million in 2016-2017.

But the NEB later scaled back the size and number of employees in the offices, reducing the budget.

The NEB receives funding from government but then recovers more than 90 per cent of its costs from the energy companies based on a secret formula. Although this means most of its funding comes from industry, the NEB is still required to follow federal government spending rules for staff, special projects and contracts.

When asked by National Observer to clarify what it was spending on the regional offices, it declined to say what the actual budget was, explaining only that “the offices do not have as many staff as initially proposed.”

“The regional offices represent an important investment in engaging Canadians. The NEB’s regional offices were opened as part of an initiative to strengthen the NEB’s regional presence, raise awareness about its work, build stronger relationships with regional public and local institutions, communities, landowners and indigenous groups; and to be in a position to more quickly respond to events requiring immediate NEB attention,” the NEB said in a statement sent to National Observer.

A few weeks before its January 2015 meeting with Coderre, the NEB was talking about different objectives for the office in order to respond to anti-fossil fuel groups. An NEB internal communications plan, dated Dec. 1, 2014, said the offices were designed to build its public trust and raise awareness about the regulator “in regions with significant pipeline infrastructure.” It also said its chief executive, Peter Watson, would “leverage” his meeting with Mayor Coderre to announce the Montreal office and then “approach regional, credible third parties to promote our regional offices.”

The communications plan also noted that these regional offices would deliver “no front-line services for folks with questions or concerns” and that those people would still have to go through other existing channels to get help from the NEB.

The strategy of using credible third parties to vouch for the fossil fuel industry has also been a key component of recent communications efforts by TransCanada Corp and the Canadian Association of Petroleum Producers, an oil and gas industry lobby group.

It’s not clear whether Charest would have also been one of the third parties that the NEB wanted to recruit. But there was some interesting advice that emerged from that meeting on Jan 15, 2016.

"Message: Who is the top dog? The NEB!" Neufeld, the NEB vice president of communications, wrote in his own notes from the meeting with Charest. Notes from another staffer also show that NEB officials and Charest discussed the TransCanada project and different communications and political strategies to use in the coming months.

National Observer has shared some of the NEB communications documents with Coderre's office, and while he hasn't commented directly, he warned reporters on Friday that all of this information coming to light is distracting the public from the substance of the debate over Energy East.

Charest has denied doing any lobbying on behalf of TransCanada, but the federal New Democrats have sent two letters to Parliament's lobbying commissioner, Karen Shepherd, asking her to investigate. Then there are also the requests before the board from the lawyers of environmental groups that are calling for recusals and reassignments of any senior managers who got caught up in the Charest affair.

“I wasn't the one who started this," Coderre said. "There was Ecojustice and other lawyers (who said)... one of the panelists meets a lobbyist from TransCanada before the hearings started. So there’s a problem. Even the NEB apologized because the first story they told wasn't the same as the second.”

When asked about Coderre's comments, TransCanada sent a short statement explaining that it was "getting ready for the panel sessions."

"I'm sure you have already contacted the NEB for comment, they are probably in a better position to address the substance of your question, which is about the process moving forward," said TransCanada spokesman Tim Duboyce.

"The process is tainted"

The NEB did not immediately respond to a request for comment about Coderre's suggestions, but the mayor suggested that he believes the regulator is starting to accept it has a problem and may soon deal with it.

“But now if it becomes a procedural mess, because you’ve gotten the emails and it’s going to get released everywhere, I think at that point the process is tainted,” Coderre said. “So we’ll see what happens over the weekend. On Monday, if we’re there, I’ll say what I think, but in the meantime, I believe in the National Energy Board, in its president, in his leadership and his vision.

"I think they have a good opportunity (to address this). We won't negotiate in public. I passed the message. There are no surprises. So we’ll let this process evolve and I think you (journalists) will have plenty of good things to do this weekend.”