By Elizabeth McSheffrey | News, Energy | September 9th 2016
#54 of 138 articles from the Special Report: Secrets of Government 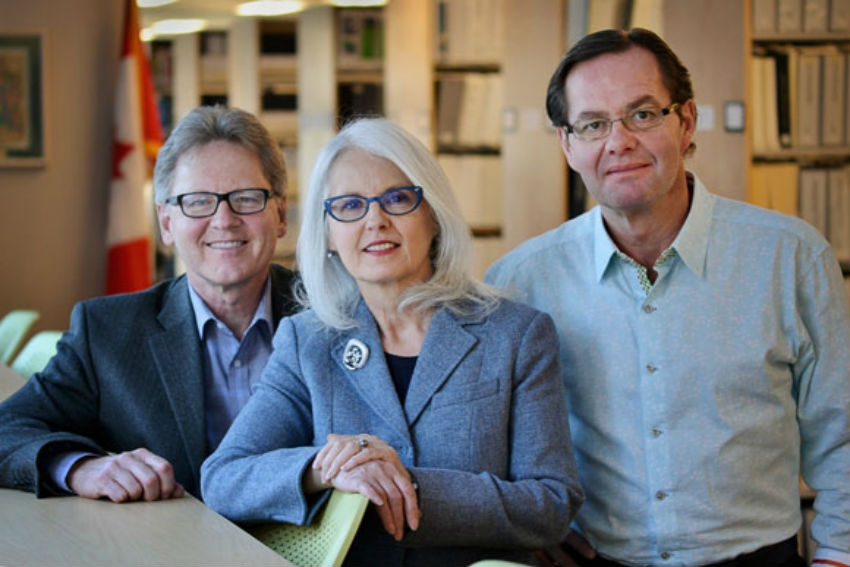 After weeks of making scandalous headlines in media outlets across the country, the National Energy Board (NEB) panelists assigned to review the Energy East pipeline have finally stepped aside.

Their chairman, Peter Watson, has also been excused from duties requiring decisions on the review of Energy East, and the hearings for the controversial TransCanada Corp. pipeline — which were shut down in Montreal last week amidst heavy protest — have been adjourned until the government names new bilingual board members who can serve on the panel.

The news comes after a series of National Observer articles revealing that NEB vice-chair Lyne Mercier and board member Jacques Gauthier met privately last year with former Quebec premier Jean Charest — who was a paid consultant for TransCanada at the time — while they were assigned to the Energy East pipeline hearings for the NEB.

Energy East, a 4,500 kilometre project, is the largest pipeline ever proposed in Canada, and if approved, it would ship up to 1.1 million litres of oil per day from producers in Alberta, Saskatchewan and North Dakota to refineries and marine ports in Quebec and New Brunswick. Most of the crude would likely be exported abroad, providing access to new markets for Canada's slumping oil companies.

Many First Nations leaders, environmentalists, and mayors say the project is too risky and would put Canada's climate change goals out of reach, while many business leaders and union officials say the project can be safely built, while contributing to the economy.

Yet the apparent conflict of interest from the meeting with Charest resulted in thousands of nationwide calls from environmental organizations, politicians, environmental groups, and lawyers for the recusal of the panel and cessation of Energy East hearings. Now that both have been granted for now, here's what people are saying about it:

Peter Watson and Lyne Mercier, chair and CEO, and vice-chair of the NEB panel

"It is our strongly held view as Chair and Vice-Chair that it is both necessary and appropriate for the Board to engage actively with Canadians. Engagement meetings in Montreal on 15 and 16 January 2015 were undertaken in good faith in support of the Board’s engagement activities.

"Notwithstanding this, our participation in these meetings may have cast a doubt on our continued abilities as Chair and Vice-Chair to exercise the limited and specific administrative duties prescribed under sections 6, 15, 16, 52 and 58 of the National Energy Board Act, in relation to the Energy East and Eastern Mainline applications. Accordingly, we have decided to recuse ourselves from performing these functions for the purposes of the Energy East and Eastern Mainline applications."

"In order to preserve the integrity of the Energy East and Eastern Mainline projects’ review process, I have decided to recuse myself and thereby help maintain a climate of trust, impartiality, and objectivity. This should help all Canadians contribute fully to the review process."

"... I have never participated in any engagement meetings as part of the National Engagement Initiative or any stakeholder meetings related to that initiative. Still, I too understand the rules of natural justice and the need for justice not only being done but being seen to be done.

"Given that I have deliberated with my fellow members of the Hearing Panel for an extended period following the engagement meetings, I am of the view that a reasonable person could think that I have been tainted as a result. My continued presence on the Hearing Panel has the potential to undermine the public’s confidence in the integrity of the Board’s decision-making process."

"We accept the NEB’s decision. We look forward to the sessions resuming and a respectful and constructive dialogue with Canadians about Energy East. The NEB hearing process is important to TransCanada. It is a formal, open and transparent way to further address people’s questions and concerns, while building knowledge and understanding about the project."

"Mr. Watson took a decision filled with integrity, he acted with diligence and he did everything to protect the integrity of the National Energy Board."

"Our government is committed to an open, fair, inclusive and transparent process for decisions on major energy projects. While it is unfortunate that the circumstances have delayed the regulatory review for this project, independence and neutrality are fundamental principles for all of Canada's regulatory institutions, including those reviewing major projects such as the National Energy Board."

"Environmental Defence welcomes the news that NEB members Jacques Gauthier, Lyne Mercier and Roland George have recused themselves from the Energy East review but this doesn’t go far enough. The apprehension of bias – as evidenced by today’s recusal announcement – has damaged the entire review process beyond repair...

"The review of Energy East should be suspended until the NEB is fixed. It makes no sense to assess Energy East, the longest and largest tar sands pipeline ever, using a process everyone agrees is deeply flawed."

Daniel Cayley-Daoust, energy and climate campaigner for Council of Canadians:

“These recusals are a step in the right direction, but they do not fix the NEB’s structural problems. The ball is in the Liberals’ court now. They can’t expect people whose livelihoods are at risk from the Energy East pipeline to trust a process that the Liberals themselves have admitted is structurally flawed and in need of reform.”

"This vindicates our concerns about two panel members’ meetings about Energy East with interest stakeholders behind closed doors. But the process is now in disarray. The government must appoint new French-speaking members, the Board must authorize a new acting Chair and Vice-Chair in respect of Energy East, and the acting Chair must appoint an entirely new panel.

"That future panel will have to confront the question of what to do with all of the outgoing panel’s work up to now. The courts have said a proceeding tainted by a reasonable apprehension of bias is void and must start over from scratch.”

So let me get this straight, #NEB #energyeast panel resigns cuz met w/proponent but #kindermorgan panelist did same thing & are ok? #cdnpoli

Recusal of #NEB #EnergyEast board members not the end: legal precedent says process to date has to be re-done: https://t.co/Z4UwlRIIkI

"Mr. Watson took a decision filled with integrity, he acted with diligence and he did everything to protect the integrity of the National Energy Board."

Pardon?
Mr. Watson's decision yesterday is a step in the right direction, true.
But what about his decision in January 2015 to not only allow secret, unauthorized meetings regarding a "matter before the Board" to occur, but to himself participate in these meetings? The Chair is arguably the person who is most responsible for upholding the Board's internal protocol, code of conduct and precautions, all of which are crystal-clear and are there to protect the integrity & reputation of the NEB.

To date, the NEB has not admitted that anything "inappropriate" happened (despite the clarity of the rules), much less apologized to Canadians for it. Had it not been for Mike's exceptional digging it's entirely likely that none of this would have come to light.

Top-level noncompliance warrants a top-level investigation: citizens need to know what occurred in Montreal and why. Public trust in the NEB is unlikely to be restored until we get to the bottom of this. Violation of the rules by public servants of any government agency is a very serious matter, especially when the violations are made by its most senior officers.

There is systemic ineptitude

There is systemic ineptitude within the NEB. Recently, the NEB has allowed a pipeline rife with longstanding safety issues to continue operating, despite the dissent of two Board Members.

The pipeline company, TransNorthern Pipelines, owned by Suncor, Imperial Oil, and Shell Canada, has had 6 years to comply with safety orders, yet is still not yet compliant and it's, "operational controls do not meet the requirements of the NEB's Onshore Pipeline Regulations or CSA Z662-15". (Refer to File OF-Surv-Gen-T217 01 20 September 2016)

There are outstanding contamination issues with numerous landowners due to releases from this pipeline on their lands, of which the NEB is aware, yet the NEB allows this rotting pipeline to continue operating?

The magnitude of projects under consideration by the NEB such as Energy East/ Eastern Mainline, cannot be reviewed by the current Board with any semblance of aptitude and confidence. The Board must be replaced.