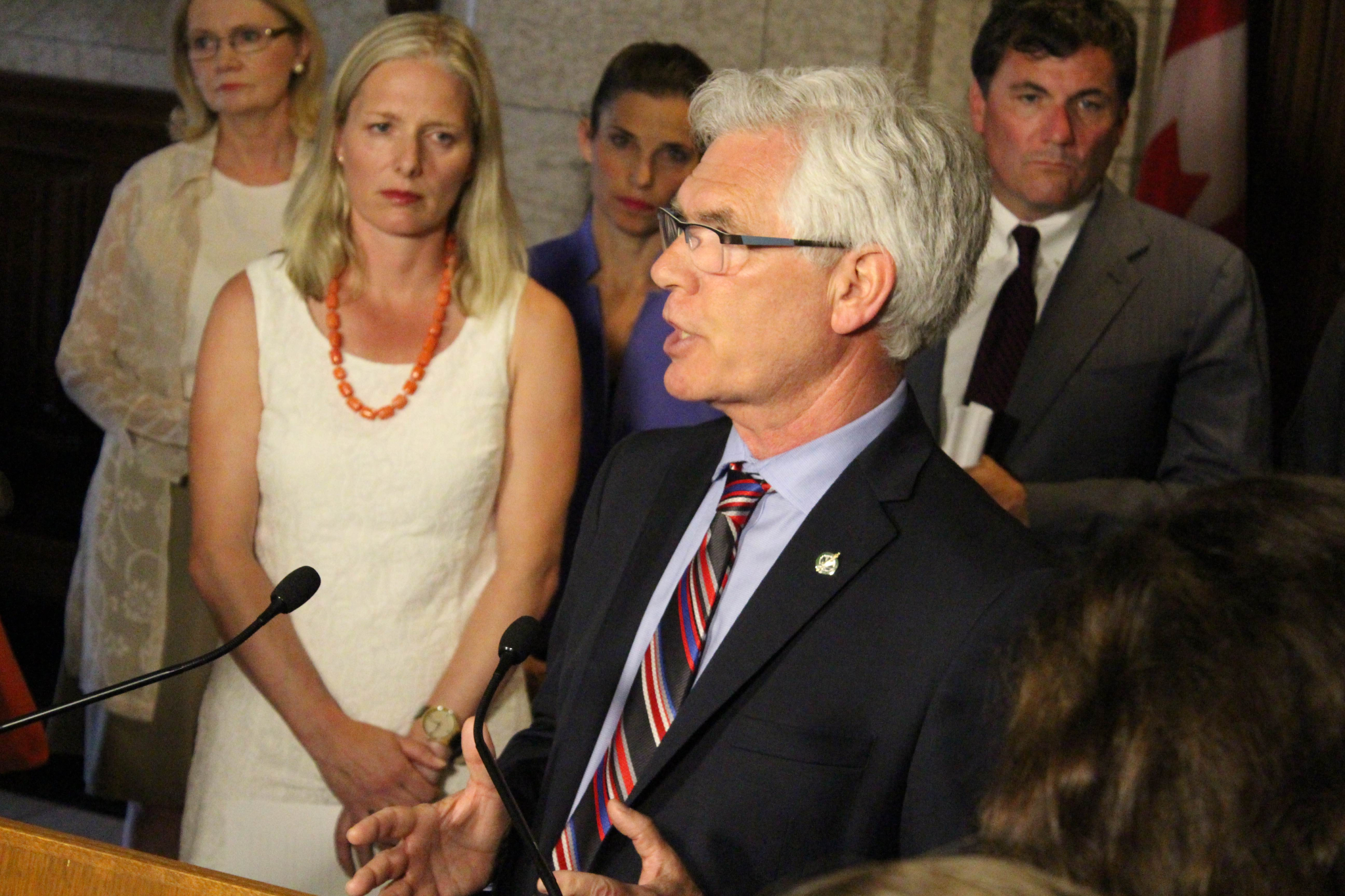 Canadian Natural Resources Minister Jim Carr is musing about whether the government review of the controversial Energy East pipeline project may "have to go back to square one" in the wake of conflict of interest allegations that forced a temporary adjournment of hearings last week.

Speaking to reporters outside of a weekly cabinet meeting in Ottawa, Carr said the government would soon appoint new members to the federal regulator, the National Energy Board (NEB), so it could proceed with its review after the existing panel recused itself last Friday.

But the latest developments could result in modest delays, Carr explained.

The adjournment and recusals were prompted by recent reports by National Observer about inappropriate private meetings held by the NEB's chief executive Peter Watson, along with panel members, to discuss Energy East — a 4,500 kilometre crude oil pipeline that is being proposed by Calgary-based energy company, TransCanada Corp.

Some industry experts have expressed concerns that the scandal is decreasing the odds that the multibillion dollar project would actually get built.

Many business and union leaders believe the pipeline would create jobs and provide a boost to Canada's slumping oil industry, but vocal opposition from First Nations leaders, environmental groups, landowners and mayors maintain the project is too risky and would put Canada's climate targets out of reach.

The Board is an independent regulator of pipelines and other energy transmission projects under federal jurisdiction and is run by members appointed by government with a workforce of public servants that includes engineers, scientists, lawyers and other support staff.

Carr said the NEB has to decide how to proceed if it wants to meet a 21-month deadline, required under laws adopted by the previous Conservative government, to complete the federal review process.

"We will give them the members they need to do their job responsibly," said Carr on Tuesday. "The National Energy Board is, you know, a quasi-judicial body that’s independent of government. It’s governed by a statute. It has its responsibilities, and it’s performing those responsibilities. And at the end of the process, the government has the final say on whether or not this project or any other that’s currently before the NEB is in the national interest."

The scandal has also affected the NEB's chief executive Peter Watson, who was forced to recuse himself from any dealings with the Energy East process since he participated in the private meetings with stakeholders in January 2015. One of those meetings was with former Quebec premier Jean Charest, who was working for TransCanada at the time and gave the Board political advice about gaining public support for pipelines.

A director from the NEB's Montreal office who attended the meeting was also reassigned, the regulator said in documents released on Friday.

Several First Nations leaders, including Ghislain Picard, chief of the Assembly of First Nations of Quebec and Labrador, have called for Watson's resignation in the wake of the scandal and a brand new review. Environmental groups have also criticized the decisions made by the previous panel, which accepted TransCanada's application as complete, even though it included no information about risky water crossings beneath the Ottawa and Saint Lawrence Rivers.

When asked whether the scandal could delay the process, Carr said: "It could be changed modestly, depending on whether or not they determine they have to go back to square one, but you know, we are committed to making sure that every Canadian who has an opinion on this has the right to express that opinion."

Carr added that he was not concerned about whether it would be difficult to find new bilingual experts to appoint to the Board, who would then wind up reviewing the proposed pipeline.

"T​he government has the responsibility and the authority to appoint those members to the National Energy Board," Carr said. "Traditionally, the chair of the Board determines on what panels they sit, but on the Energy East panel there are qualities that are very important to consider. So that’s our responsibility, and we’ll take it seriously and we’ll do it as quickly as we can."

When asked to respond to Carr's comments, TransCanada said it was continuing to engage with stakeholders, including municipalities, land owners and Indigenous communities, and that the company would follow the federal process.

“There honestly isn’t much for me to add,” said TransCanada spokesman Tim Duboyce. “As a company with a project under review by the National Energy Board, our job is to follow directives, which means participating fully in the process, listening to questions and issues raised, and to address them.”

He added that TransCanada was looking forward to the NEB process resuming with a “respectful and constructive dialogue with Canadians about Energy East.”

“The NEB hearing process is important to TransCanada,” he said. “It is a formal, open and transparent way to further address people’s questions and concerns, while building knowledge and understanding about the project.

Reacting to the latest developments, Patrick DeRochie, Climate and Energy Program at Toronto-based Environmental Defence, said that Minister Carr needs to do more.

“If the minister is truly interested in restoring public confidence in a credible pipeline review process, the Energy East review can only restart after the NEB is overhauled from the bottom up," DeRochie said. "Replacing a few panel members and pretending the NEB isn’t broken is no way to gain social license for Energy East. Previous federal court decisions on apprehension of bias show that the Energy East process has to start from scratch with new panel members.”

I agree that the NEB must be

I agree that the NEB must be overhauled from top to bottom. It is a board that was stacked by Harper with people who supported the pipeline industry. Indeed, a number of them had actually worked for various pipeline companies.

Secondly, the NEB should be relocated to a location not dominated by the hydrocarbon and pipeline industries. The social pressure to conform with the will of those industries is to great when the regulator is located in their midst.

Furthermore, the entire process should be restarted only after the environmental laws gutted by the Harper government have been reversed and possibly improved from the original.

I totally disagree with Trans

I totally disagree with Trans Canada spokesman Tim Duboyce that the NEB is an"open and transparent" hearing process! As of today, I see no evidence that the Trudeau government is "truly interested" in creating a credible NEB review process. After a very short time, those of us taking part in the Enbridge NGP Joint Review Panel (JRP) hearings, soon realized just how small and narrow a scope that the NEB had imposed on their "appointed" JRP panel. This narrow scope "tipped playing field" was created to enabled the NEB to arrive at their, much apparent, preordained, destination of approval of the project. With no credible NEB visible on the near horizon, it does appear that Harper's legacy (bills C38 and C 44 and such) will remain supreme for some time to come. From what I have seen and heard the Kinder Morgan hearing were even worse. Shame , shame ,shame, no transparency or honesty in all of it.

Of course it has to reset to

Of course it has to reset to square one. How are the new panel members to know or understand the presentations provided in Saint John and Fredericton. Saint John being the terminus of the pipeline is a key area of impacts which they must have an intimate knowledge of. As well they need to hear first hand from the aboriginal groups from across the province.