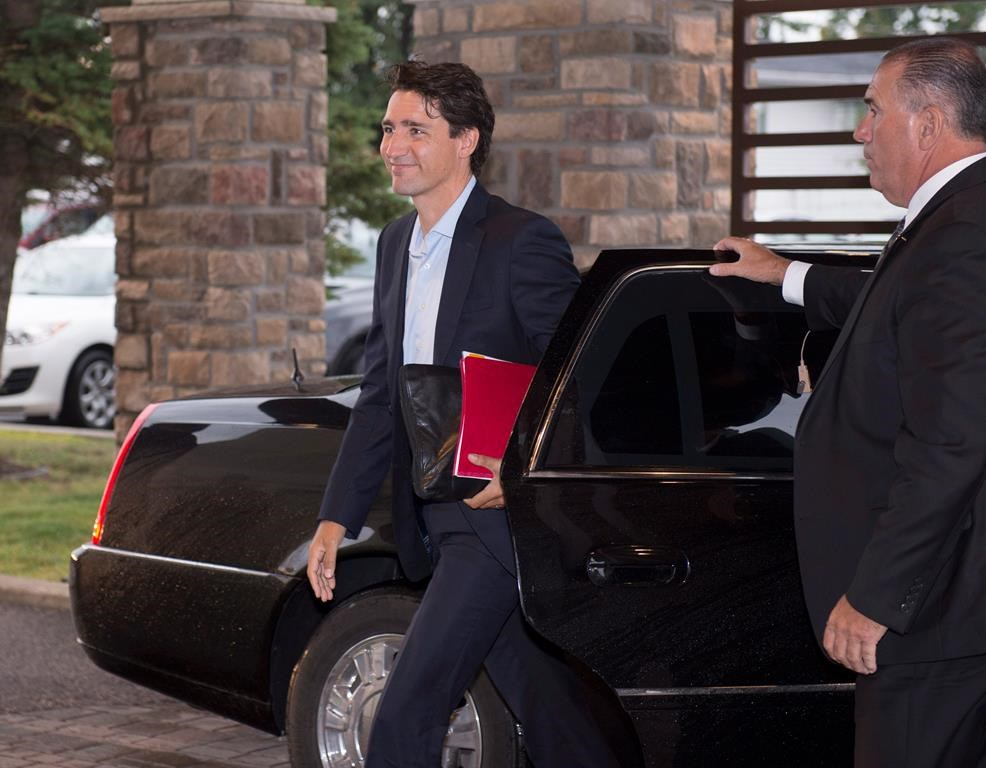 Prime Minister Justin Trudeau arrives at a Liberal caucus in Quebec on August 25, 2016. File photo by The Canadian Press.
Previous story
Next story

Canada's pipeline regulator made an "illegal" decision to shut down a probe into its private dealings with oil industry advocates in the midst of a major pipeline review, a Quebec environmental group said on Monday.

The regulator, the National Energy Board, made this decision on Friday as it adjourned hearings on the controversial Energy East pipeline project and announced that several high-ranking officials, including chief executive Peter Watson, were recusing themselves from the process due to concerns about conflicts of interest.

The stunning recusals and adjournment has left the review of Energy East, the largest pipeline ever proposed in Canada, in limbo until the Trudeau government names bilingual NEB members who would form a new tribunal to review the project. If built, Energy East, proposed by Calgary-based TransCanada Corp., would stretch across six provinces on a 4,500 kilometre route from Alberta to New Brunswick, shipping up to 1.1 million barrels of oil per day.

Watson and NEB vice-president Lyne Mercier, said they were forced to recuse themselves from any involvement in the review of Energy East, the largest pipeline ever proposed in Canada, in order to protect the integrity of the regulator. Their recusals were a direct result of evidence, uncovered by National Observer in July and August, that they had received political advice in private meetings about getting public support for Energy East from several stakeholders, including former Quebec premier Jean Charest, who was working for TransCanada at the time.

Several environmental groups have celebrated the recusals because they believe it removes an industry-friendly bias that would have favoured approval for the pipeline.

But in their statement on Friday, the two high-ranking NEB officials still made a decision about Energy East, saying that there would be no further release of internal documents about the Charest controversy, nor would there be any investigation.

André Bélisle, president of the Association québécoise de lutte contre la pollution atmosphérique, said he was pleased that the NEB admitted its mistakes, but questioned why Watson and Mercier were trying to shut down an investigation. He said it didn't make sense for the Board to be recusing itself about Energy East issues, while still making decisions about the process.

"This is illegal," said Bélisle in an interview. "What they're saying contradicts itself."

Watson and Mercier said on Friday that “publication of information on the hearing record or investigation by a newly assigned Panel, would, in part, frustrate the intended effect of the recusals and may introduce apprehensions associated with any newly constituted panel.”

The NEB was not immediately able to explain how a new investigation or release of documents could introduce apprehensions to a new panel.

"I cannot provide any additional explanation beyond what the Panel chose to include in their decision letters," said NEB spokeswoman Sarah Kiley in an email to National Observer.

The statements from Watson and Mercier also raise questions about the legitimacy of other decisions made by the NEB over the past year, regarding TransCanada, that followed their meeting with Charest. One of those decisions, announced in October, was to dismiss pipeline safety allegations raised by a whistleblower against TransCanada following a formal investigation overseen by Watson.

At that time, TransCanada noted that there was no evidence that any of the allegations were substantiated, while the whistleblower disagreed.

Prime Minister Justin Trudeau's government has said it is planning to appoint new members to the NEB in the near future.

Bélisle said it's now up to the government to choose people who would be mindful of sustainable development issues while reviewing the project. This would mean that the new panel members should consider all of the climate change impacts and greenhouse gas emissions from the oil that would be transported in the pipeline, Bélisle explained.

First Nations leaders, environmental groups and some mayors have called for an overhaul of the NEB and a pause on all reviews until the federal government can address conflict of interest concerns and create a process that inspires public trust. Many of them are also opposed to Energy East because they believe it will lead to dangerous spills and push Canada's climate change goals out of reach.

Business leaders and some union leaders support Energy East because they believe it will provide a boost to Canada's slumping oil industry, while creating thousands of construction jobs.

Montreal Mayor Denis Coderre defended Watson after the NEB adjourned the Energy East hearings, saying that the chief executive was showing courage and integrity by removing himself from the process.

Coderre has also suggested that the government has an opportunity to restore public trust in the process by considering environmental advocates or Indigenous leaders as potential candidates to serve on the NEB and a new Energy East panel.

Editor's note: This story was updated at 7 p.m. ET with a statement from the National Energy Board.

It could cause apprehension

It could cause apprehension depending on what an unbiased investigation could possibly uncover, like revealing a profile of a completely captured regulator and mechanism of the oil industry. .