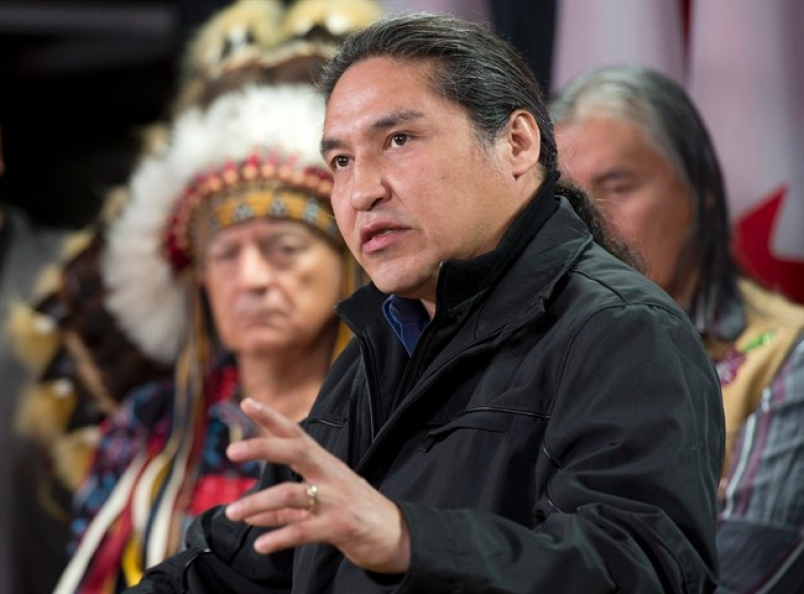 An Alberta aboriginal leader says inaction from the provincial government is forcing his First Nation to reactivate a court challenge to an approval for a major oilsands pipeline already under construction.

"With the new NDP government coming in, we were hoping they'd come to the table and start working on things that are outstanding," Chief Allan Adam of the Athabasca Chipewyan First Nation said Monday.

"But when they came to the table, nothing came about. Nothing has moved on anything."

The band originally filed a lawsuit in January 2015 against regulatory approvals for the Grand Rapids pipeline, a 460-kilometre 900,000 barrel-a-day line from northern Alberta to southeast of Edmonton. It is co-owned by TransCanada Corp. (TSX:TRP) and a unit of PetroChina.

The band alleges Alberta's aboriginal consultation office violated its rights by saying it wasn't directly affected by TransCanada's Grand Rapids proposal, even though it crosses land claimed as traditional territory.

The aboriginal consultation office, intended to make talks between First Nations and industry smoother and more predictable, has instead become a major friction point.

The consultation office is responsible for deciding what level of talks are appropriate when industrial development affects aboriginals. In this case, the office ruled the pipeline wouldn't affect the ability of band members to practice their treaty rights — even though several had filed affidavits saying they regularly hunt, fish and gather plants on land the line would cross.

The office later told the band that the decision was made using maps compiled internally without input from the First Nation. Those maps were not shared with the band.

In papers filed this month, the band also alleges there was pressure to approve the pipeline quickly.

It quotes a letter written by a senior official at the consultation office that says: "TransCanada’s treatment of our staff […] has been minimally professional and on the border of bullying."

Another government official wrote that the handling of the Grand Rapids proposal "will not be the routine way of doing things going forward. This is an exception due to the higher level of interest in this project."

A provincial spokesman wasn't immediately available. The province has changed some aspects of the consultation office but the bulk of it remains in place.

The province's energy regulator began public hearings on the project in July 2014. The Athabasca Chipewyan withdrew after the panel refused to give them an 18-month adjournment to consider project changes. Nor would the panel grant research funding.

The Grand Rapids proposal was ultimately approved and is under construction.

Adam said the band had decided to put the lawsuit on hold to see if the New Democrats, elected in May 2015, would make changes to provincial rules on aboriginal consultation. Those rules are widely despised by Alberta First Nations and NDP Premier Rachel Notley's promises of reform were a big reason Adam supported her campaign.

Those promises remain empty, he said.

"The talk around our table is that the NDP government is just another platform of the previous Conservative government with a different logo. Nothing has changed."

Adam said the two parties haven't even been able to agree on how to move forward.

The lawsuit is to be heard in a Calgary court starting Nov. 8.

"What we ask for is the minister to start the consultation process and do it properly," he said. "If they do that, it may not be necessary to reopen (regulatory hearings)."