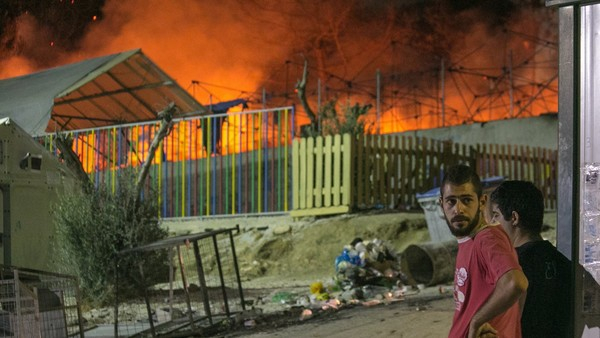 On Monday night a blaze ripped through the now-infamous Moria detention facility on the Greek island of Lesbos, which lies just off the coast of Turkey. Within minutes more than half the camp was burning and thousands of refugees were fleeing their makeshift homes, many forced to abandon what meagre possessions they still had.

Moria a disaster waiting to happen

The Moria camp—a former Greek military camp on this idyllic Aegean island—has been a crucible since its re-invention, first as a “reception” centre in the earlier stages of the crisis, and later as a detention camp once the European Union decided back in March of this year that it would begin deporting asylum-seekers back to Turkey.

Moria—much like France’s Jungle of Calais and other flashpoints in the disaster—serves as a poignant symbol of the catastrophic mismanagement that has come to characterize the world’s response to the asylum-seekers’ plights.

Conditions have been dismal in Moria, falling well below minimal standards set out by the United Nations Human Rights Commission (UNHCR) for the treatment of those in search of refuge.

Members of different ethnic groups—many who experience historically tense relationships—have been warehoused in unacceptably tight confines, a surefire recipe for violence, especially given the extreme stress under which the refugees find themselves at present.

That conflict and unrest in the camps has not been worse is actually remarkable.

To make it all the more sickening, authorities have been criticized for housing particularly vulnerable populations in Moria, including single women with small children as well as unaccompanied minors. Amidst the chaos on the ground, reports have emerged from camps throughout Greece and elsewhere of systematic sexual exploitation.

The latest upheaval in Moria is sure to make matters worse.

Meanwhile in Syria, this week’s failed ceasefire—just one of a long line, really, in an interminable conflict involving an incomprehensible tangle of actors—ensures that the horrors of the Syrian war will persist for the foreseeable future. The increasing willingness of armed forces from all sides to view aid operations as legitimate military targets—only days ago, a convoy carrying UN supplies was hit by an air strike, killing 20 civilians just as the Syrian government declared that the ceasefire had collapsed—means the humanitarian situation will deteriorate in Syria and in other conflict zones around the world, as aid groups become increasingly reluctant to enter a theatre of war that refuses to acknowledge amnesty.

Which means more people on the run.

And there are many others. From conflict zones and horrors we never hear about, that aren’t worth reporting on. Civilians chased by bombs, instability, hunger, or utter lack of opportunity.

In other words, it is entirely conceivable that this crisis of mass displacement—whether throughout Asia, in Africa, or the Americas—will worsen. For now there is no sign of a slowdown—let alone any semblance of improvement.

Thus far, it is the grim reality of the 21st century.

Such a widespread quagmire requires that any policy solution must be pragmatic and multilateral. But, fundamentally—at its core—it needs to be driven by compassion.

Following World War II, mass migrations of desperate people—now the second most severe crisis of human displacement in history (behind the current one)—prompted a widespread and concerted political response, spawning such key agreements as the Universal Declaration of Human Rights written in 1948 and the 1951 Refugee Convention, which forms the platform on which the UNHCR continues to act on today.

There was a strong practical impetus behind these accords, as the world sought to deal with the social convulsions that occurred in the aftermath of the War. But in the documents that emerge from the time, there is also a strong ethical slant, a sense that never again should the vulnerable be betrayed by complacency and indifference.

Yet right now, as millions of people languish in camps throughout Europe, the Middle East, and Africa in an inertia generated by a fabricated legal limbo, such moral urgency—needed now more than ever—appears to be in short supply.

Instead, the opposite appears to be occurring. As the crisis unfolds, nations in both Europe and North America have seen the increasing legitimization of public narratives previously relegated to the margins of extremism.

In Europe, hateful vitriolic is now an acceptable norm emerging from certain podiums.

And back here in North America, the venom unleashed from the presidential campaign has no precedent.

As Donald Trump Jr. tweeted on the day following the horrific fire at Moria, "If I had a bowl of Skittles and I told you just three would kill you, would you take a handful? That's our Syrian refugee problem.”

These are indeed troubled times.

It is true that there are

It is true that there are refugees in need of help. It is also true that a large percentage are economic migrants, with some absolute lawless criminals mixed in. Real refugees don't destroy identity documents, burn off fingerprints, cherry pick countries with the most benefits to go to, carry forged passports, commit numerous crimes and acts of violence, register for asylum under a dozen names, riot, complain about lack of wifi, make endless entitled demands, beat, rape or murder those in the country looking after them, or burn down the accommodations in numerous countries. With over 75% male and thousands claiming to be under 18, even when in their 40's. That they all claim to hail from war zones where every moment was risking death, yet they left wives, daughters and parents behind? The stories don't add up and when people that have been treated far better than citizens complain loudly about the meals provided, or how hotels are like hell and they want to go back to refugee camps because they were treated better, it is not going to win over citizens.