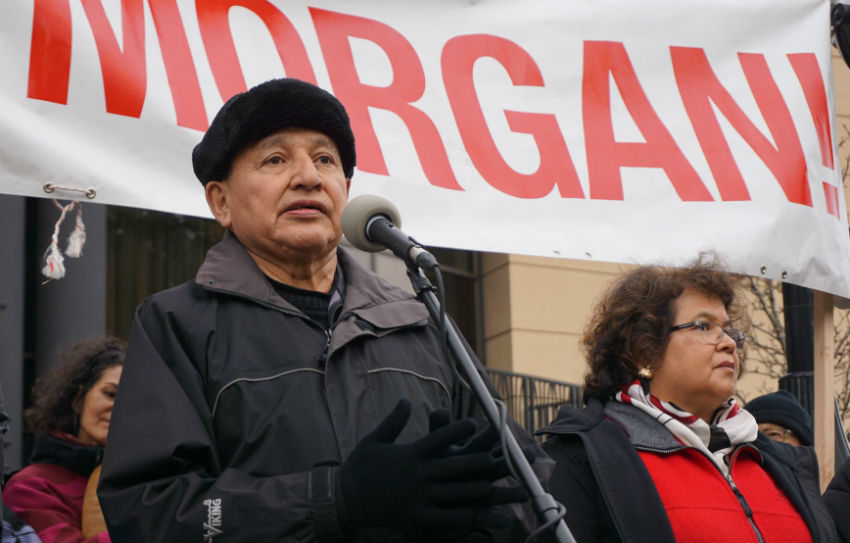 A ceremony involving the Duke and Duchess of Cambridge meant to symbolize the reconciliation of British Columbia's Aboriginal Peoples has been rebuffed by a First Nations group.

Grand Chief Stewart Phillip, the leader of the Union of B.C. Indian Chiefs, said Monday he won't be taking part or supporting the Black Rod Ceremony scheduled to be held Monday involving Prince William and Kate.

Prince William is scheduled to add a final ring, symbolizing aboriginal reconciliation, to the Black Rod, a ceremonial staff used on formal occasions when the Queen or lieutenant-governor are present in the legislative assembly.

The current three rings on the staff represent the Crown, Canada and British Columbia, but the provincial government says there have been requests for a fourth ring to signify the link with Indigenous peoples, since the staff was created in 2012 to mark the Queen's Diamond Jubilee.

But Phillip said after an intense three-day debate at the group's annual general meeting, the chiefs decided it wouldn't be appropriate for him to participate in a reconciliation ceremony. The union represents more than half of the 203 First Nations in the province.

He said the federal government has made little progress improving the lives of First Nations, while the provincial government pushes ahead with projects opposed by aboriginal groups, such as liquefied natural gas developments and the Site C hydroelectric dam.

"I apologize for any inconvenience we may have caused with our decision. We do not mean any disrespect. It is a matter of principle," Phillip said in a news release.

The provincial government couldn't immediately be reached for comment.

Phillip said he can't in good conscience attend when he remembers the deepening poverty in First Nation communities, the missing and murdered Indigenous women and girls, and the ongoing negligence of Indigenous child welfare policies.

"Certainly our people on the ground that are in the midst of dealing with these tragedies on a daily basis will appreciate us standing up and acknowledging their plight and not blindly participating in yet another grandiose pomp and ceremony that would create the illusion that things in our communities are progressing forward," he said in an interview Monday.

Stephen Point, the first Indigenous lieutenant-governor in B.C., is expected to be at the ceremony.

Prince William and Kate tour the First Nations community of Bella Bella on B.C.'s central coast Monday before giving official recognition of the Great Bear Rainforest as part of the Queen's Commonwealth Canopy.

Puma X Careaux Basket
In case you are contemplating receiving a cash advance, be sure that you have got a program to obtain it repaid straight away. The financing firm will provide to "allow you to" and expand the loan, should you can't pay it off straight away. This extension charges a charge, plus extra interest, therefore it does nothing at all beneficial to suit your needs. Even so, it generates the financing company a fantastic profit.

There are lots of diy possibilities in terms of pest management. Very first, asses how significant your insect problem is and decide what form of items you should acquire to handle the issue. Most pest control goods are available with a food market although a lot more high quality merchandise can be obtained somewhere else.