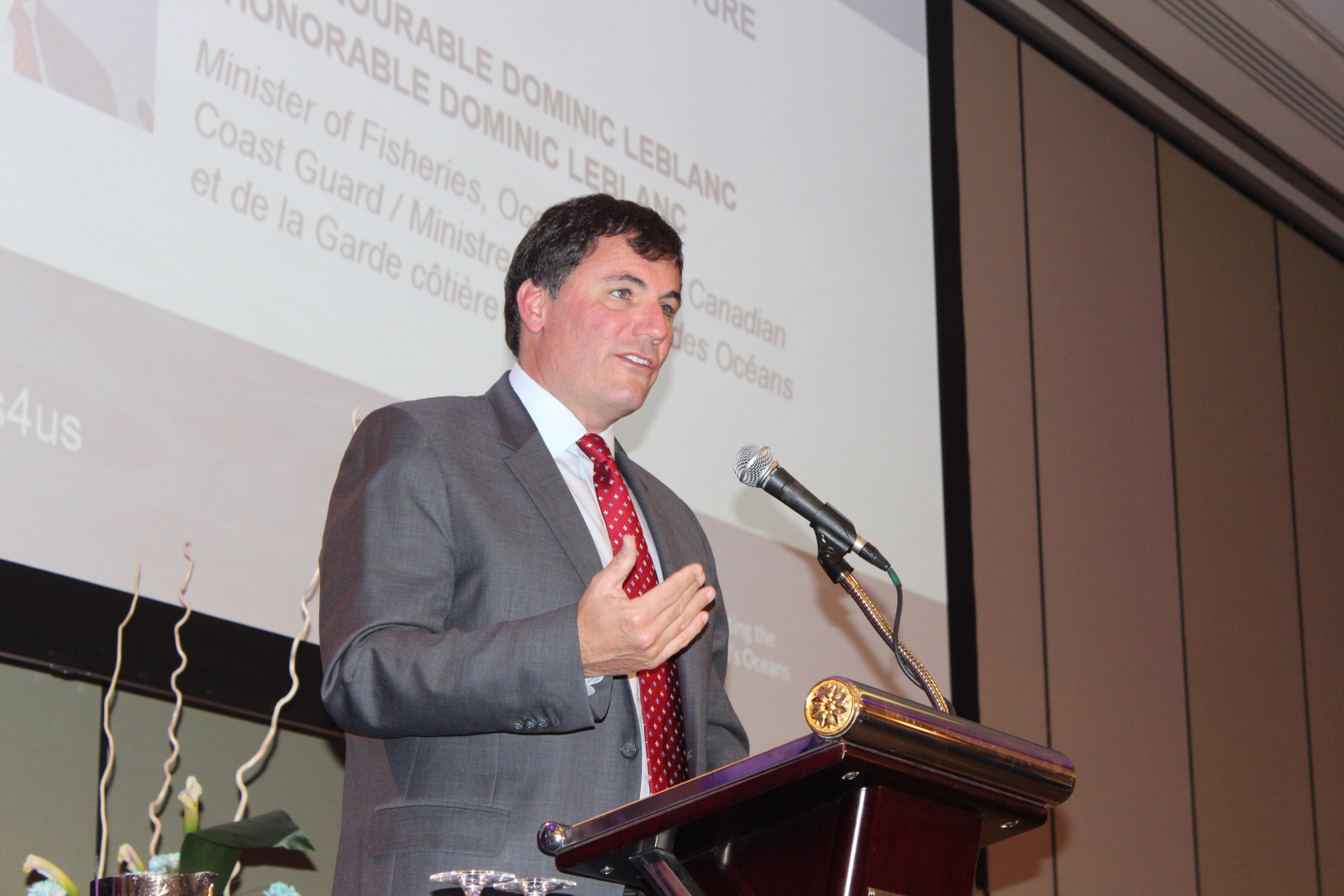 Federal Fisheries Minister Dominic LeBlanc announces a new wave of transparency in his department at an Oceana Canada conference in Ottawa on Oct. 26, 2016. Photo by Mike De Souza.
Previous story

Julia Baum and Susanna Fuller laughed when asked how they managed to track down evidence for an investigation they recently completed into the state of Canada’s oceans and fisheries.

“It was very challenging,” said Baum, an associate professor in the biology department at the University of Victoria.

Baum and Fuller’s investigation was one of the most comprehensive reviews ever conducted on the state of Canada’s fisheries, a vital economic and environmental resource at the heart of an industry that employs about 80,000 Canadians, according to federal government estimates.

The information they sought could be used to help guide management of fisheries that are at risk. It could also signal which species require additional protection from new infrastructure projects, such as oil and gas pipelines or other natural resource projects that could threaten their survival.

But Canadian governments have never released this type of information, even while others, including the United States, have been more transparent in sharing their data and evidence.

Baum and Fuller's findings were alarming. They found that less than 25 per cent of the country’s fish stocks were healthy and the status of almost half were unknown.

The two marine scientists spent months trying to contact federal scientists and department officials to get any data or information to help with the research, published in June by Oceana Canada, an oceans conservation group.

“It took eight months just to get the management plans for Atlantic Canadian species,” said Fuller, who is the marine conservation coordinator at Ecology Action Centre in Halifax. “So we took almost an equivalent amount of time pulling together the data.”

But they believe other scientists won't have to repeat their saga in the wake of a new announcement made on Wednesday by Federal Fisheries and Oceans Minister Dominic LeBlanc.

For the first time both scientists and the public will be able to see the state of various species and how they are changing over time.

“Hopefully it will lead to better research and better data,” LeBlanc said after speaking to a science symposium hosted in Ottawa by Oceana Canada. “But we also want Canadians to judge us on how we’re doing at improving and better managing the sustainability of Canada’s oceans and fisheries.”

LeBlanc said that the entire country and the rest of the world would benefit from having access to this information, noting that it would also allow people to measure whether the government is succeeding or failing at protecting Canada’s waters.

Baum said it would now be much easier for scientists to track what is happening in oceans and fisheries.

“For the next person who comes along and does this type of report, they’re going to wonder what our problem was and why it took so long, because it will be hard to comprehend now that the information is all sitting there,” she said. “That information existed before. It just was not made public on the website. Nor would DFO or Environment and Climate Change Canada share it. So there was a real lack of transparency.”

Listening to the songs of whales

In addition, LeBlanc announced that the government was granting more than $500,000 to Ocean Networks Canada, a group of ocean observatories housed by the University of Victoria, to help it organize its data.

Kate Moran, the president and chief executive of the group, said that it planned to publish some of the new data online within months. The material would include hydrophone data — the sounds that marine mammals make.

“So the public can go on and listen to various marine mammals,” said Moran. “It’s very exciting to actually hear a marine mammal.”

She added that Oceans Network Canada could also use its expertise to help DFO scientists use its data to improve its understanding of marine mammals.

Josh Laughren, executive director of Oceana Canada explained that LeBlanc’s announcement was addressing a longstanding problem of data secrecy that has plagued the federal government for years.

“They delivered something today that we’ve been asking for and I think that deserves credit, but there’s no question that what this information goes to is getting the delivery of rebuilding plans for stocks that are in the critical zone and that need rebuilding. That’s the ultimate test. We’ll roll up our sleeves in this room and start working on, start lobbying on, and pushing the minister on, starting tomorrow. But this was a critical step.”

Thank you so much, Julia and

Thank you so much, Julia and Suzanna, for the work you put into this. It may have been a motivation for Minister Dominic LeBlanc to open up,It is for this kind of work that we have subscribed to National Observer.

Thanks team National Observer. Great article, timely and vital. I too subscribe to the N/O because your reporting is second to none.

This sort of transparency

This sort of transparency will be a welcome improvement of course, if it happens. It is at least as important to also have transparent sharing of timely and high quality information about various parameters of ocean quality, such as levels of contaminants, acidity and temperatures, in all Canada's major maritime regions.

Well, the release of the

Well, the release of the information is certainly good news, however, what the data indicate is what many have long suspected. Lets hope this government acknowledges the death spiral we are very nearly locked into.