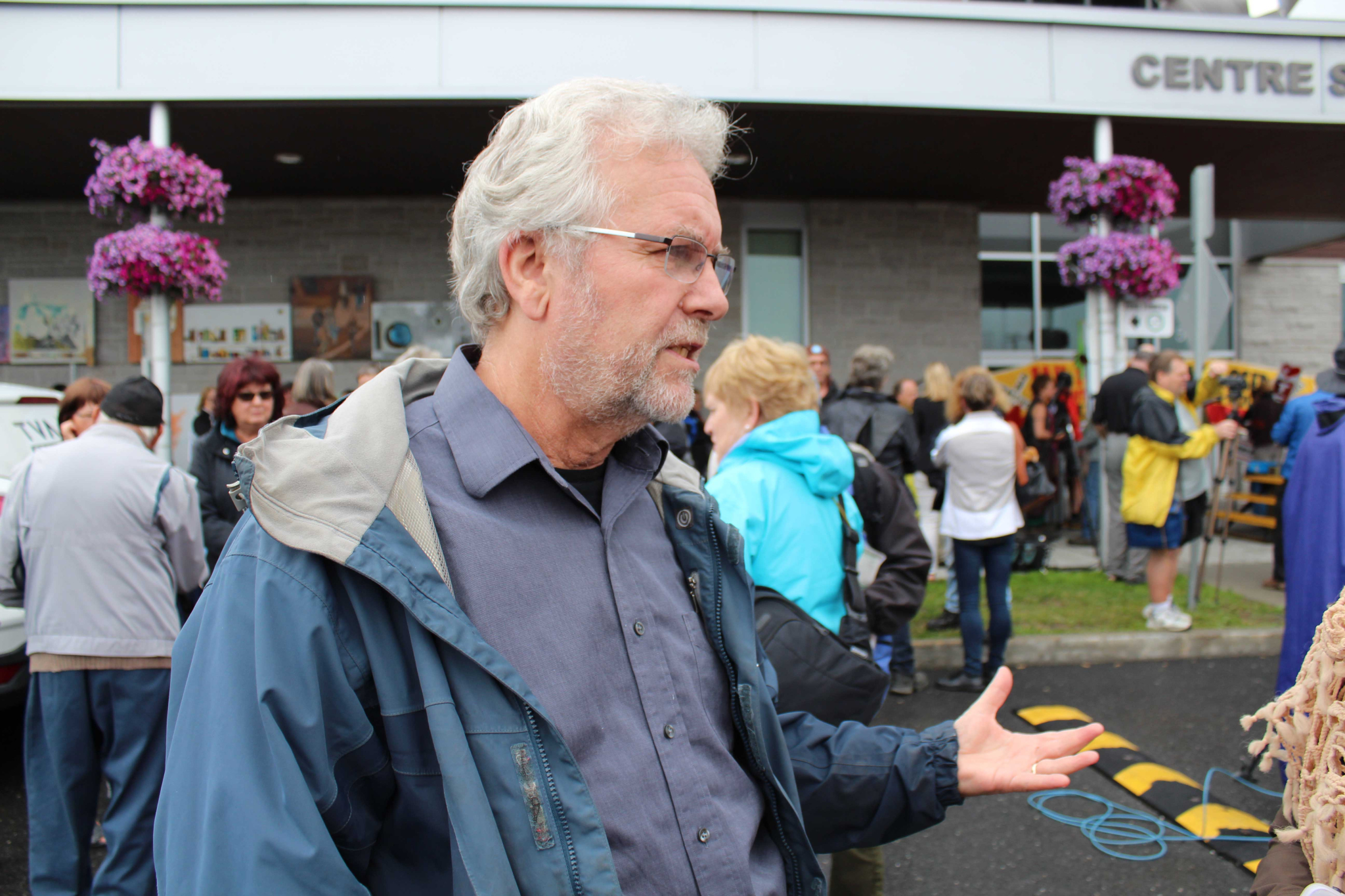 The railway and oil industries exert enormous power over governments, tilting decision-makers toward “economic considerations” which often compromises public health and safety, and our environment.

This power is reinforced by a consensus that issues related to the transport of oil by rail are the exclusive jurisdiction of the feds.

However, communities are challenging this consensus. They are becoming increasingly vocal in demanding a say about dangerous goods passing through their communities.

In a precedent-setting ruling, the U.S. Surface Transportation Board granted the town council of Benicia, California, the legal authority to reject an application by oil giant, Valero, to build an major rail loading facility which the council deemed a danger to the community.

In Canada, Mi’gmaw First Nations communities in the Gaspésie are invoking Charter rights to force the federal government to intervene and halt the proposed Belledune, NB oil export terminal. The Mi'gmaw argue they have a constitutional right to be consulted before the project goes ahead.

In January 2016, the Canadian Environment Assessment Agency (CEAA) approved a request from Ecojustice, on behalf of Greenpeace and Safe Rail Communities, to conduct an assessment of the proposed expansion of the Hardisty, Alberta rail loading terminal—a first for a rail-based shipping facility (the company has since withdrawn its proposal.)

Most recently, the municipal council of Rimouski, Quebec asked the federal environment minister for a CEAA assessment of all the implications of the Belledune rail terminal project which would increase oil train traffic by 220 tank carloads per day through their community and other urban centres along its route. The request was made because the provincial government refused to conduct its own assessment.

In most cases, the CEAA can only launch an assessment if the environment minister approves the request. Hardisty escaped this ministerial discretion provision because it fell under a “railway yard” exception. However, Transport Minister Garneau pre-empted a decision by his colleague by stating categorically that the government would not conduct an assessment.

A federal private member's bill tabled by NDP environment and climate critic, Linda Duncan, would remove ministerial discretion. It would mandate the environment minister to conduct assessments and consultations of activities that communities deem risky to the environment, human life or public health, in this case oil trains.

The bill would, if adopted, help open up what has been a cozy closed-door conversation between industry and Transport Canada, one in which industry has generally called the shots.

In the months before the Lac-Mégantic disaster, citizens were raising concerns about a dramatic increase in massive oil trains barreling through the town centre on appallingly poor tracks. Transport Canada seemed oblivious to the dangers.

Would it have made a difference had the environment minister been required to investigate their concerns? Lac-Mégantic’s causes were multiple, mutually reinforcing and cumulative. But giving a voice to those potentially affected is one step in reducing the risks of another disaster.

Regulate the product not just the trains

Communities are also deeply concerned about the highly explosive nature of the oil traversing their territory. The oil companies have largely evaded their responsibility in this regard and have not taken measures to reduce or eliminate the danger of their product.

The federal government has focused its attention much more on the safety of the containers that transport crude oil, than on their contents.

Its touted accelerated phase-out of the legacy DOT-111 tank cars — a largely symbolic gesture — diverts attention from the ongoing danger. The (slightly less unsafe) CPC-1232 tank cars — which now carry the bulk of crude oil and which continue to derail, puncture and explode — will be allowed to operate until 2025. Furthermore, their replacement, the much-improved DOT-117 design, is still untested in an actual crash.

The U.S. petroleum industry continues to resist efforts to require companies to remove Bakken shale oil’s most explosive components — responsible for Lac–Mégantic and other major incidents — prior to loading, on the dubious pretext that the science is not conclusive. The Canadian government appears reluctant to weigh in against the transportation of “un-stabilized” Bakken crude in Canada.

Most bitumen currently shipped by rail from Alberta is in the form of "dilbit" — bitumen mixed with 30% or more diluent to make it flow. It is highly volatile and will explode in a derailment as Gogama, Ontario accidents in February and March 2015 demonstrated. Until Gogama, diluted bitumen was thought to be much safer than Bakken crude.

The National Energy Board testified recently before a Senate Committee that, without new pipeline construction, the volume of bitumen transported by rail could increase ten-fold in the coming decades. Whether or not new pipelines are built, and notwithstanding the NEB’s exaggerated claim, industry bodies foresee a likely increase the transport of bitumen by rail in Canada in coming years.

Whatever the volumes, dilbit poses a clear and present danger to human safety and the environment—danger compounded by a deeply flawed rail regulatory regime.

Bitumen shipped in its raw form (called neatbit) is much safer than dilbit. It does not explode or flow, but few companies are using or considering this option.

Why? One reason is that it must be shipped in specially insulated tank cars with heating coils, of which limited numbers exist at present. Despite neatbit’s potential cost advantages and clear public safety benefits, neither the oil industry nor governments seem in a hurry to adopt this method, focused as they are on pipeline expansion.

As long as bitumen continues to be extracted, and as long as rail continues to transport it, neatbit is clearly the lesser of evils. The threat to human life would be eliminated and the risk of environmental damage would be greatly reduced.

The government should mandate the phase-out of dilbit by rail. It should be encouraging the construction of heated tank cars to handle this much safer raw bitumen as it is doing with the stronger DOT-117 cars.

Communities are on the front lines. Their anxieties have not been quelled by government measures. They are not reassured by federal claims that rail safety is the top priority. They want a say in whether and under what conditions, dangerous goods pass through their territory. Efforts to deny or diminish their voice on narrow jurisdictional grounds will surely fail.

CN and CP Rail have been

CN and CP Rail have been cutting back maintenance crews multiple times over the past decades. All it takes is a short investigative walk down a section of isolated rail line to count the loose or missing spikes with missing tie clips or spike plates. When Warren Buffet bought CN Rail there were massive layoffs of Section Crews. The old system of open motorcars had crews diligently observing the condition of the rail fastening hardware. If a spike was loose, it was removed and a wooden peg put in and the spike hammered back in. If a tie split it was removed winter or summer and replaced. Now modern crews ride in High Rail Crew Cabs far above and unable to observe rail conditions.

The alternative proposal of the Energy East is a pipeline Conversion of old natural gas pipe line first built in 1957. It is NOT a New Construction Project. This = environmental genocide. It is recommended you do not put new wine in old wineskins. Trans Canada Pipelines had no intentions of doing Hydrostatic Testing of the old natural gas pipeline loops they intend on converting to pump diluted bitumen for Energy East. I worked Hydrostatic Testing for different pipeline contractors in Northern Ontario in the early 70’s. Most of the work was done in winter months as you cannot build new pipeline or repair pipeline ruptures in swamps when they are not frozen. The attached National Energy Board Report of the Beardmore Blast has pictures to look at. This explosion was close enough to town that snow was melting off rooftops.

If this line was carrying Diluted Bitumen, Beardmore would likely be Lac Megantic No. 2. Note the sloping terrain and the Blackwater River that is adjacent to the line rupture and winds around the town. (Figure 1.) I just talked to a Beardmore resident whose home is closest to the southern edge of town. He also questioned, how would they ever stop the back-flow of oil at Winch Hill just North of Station 75 at Orient Bay. A line rupture there would have oil running into Gorge Creek and pristine Lake Nipigon’s Orient Bay. Winch Hill is so steep dozers, side booms and excavators have to be winched up the hill for line construction or upgrading. A line explosion at Winch Hill would close Canada’s Highway 11 Northern Route until the fire burnt out.

Also note in the picture the rough shot rock backfilling the line at the explosion site and the concrete anchor weight holding down the pipe because of a high water table or inadvertent drainage ditch created by the pipeline trench.

Quote from NEB Report: The occurrence section had not been hydrostatically retested since its original commissioning in 1972... (39 years) During an emergency situation, the swift and effective operation of all valves within a given pipeline section is key to a safe and quick shutdown and repair of the pipeline. If one or more of these valves fail to close or seal properly, this can lead to delays in emergency response, access (page 18 )
to the occurrence site and the initiation of repairs. In this occurrence, the failure of the cross- over valve to seal fully and isolate the ruptured section of the pipeline system permitted the leaking natural gas to feed the fire at the occurrence site, delaying the start of the repair work.

Note these new protocols are for Natural gas lines only, not 40 year old natural gas pipeline converted to pump diluted bitumen.
Question to Trans Canada how do you do a Hydrostatic Test on a pipeline after it has been used to pump oil? How do you remove oil out of valleys and river crossings to run smart Pigs for electronic inspection? Is the answer, once In Service, cross your fingers? Another issue for Eastern Energy Security, if this rupture was dilbit, what would the impact be on the adjacent 2 or 3 other pipeline loops transporting Natural Gas for Industrial uses, home heating and Electrical Co-Generation in Eastern Canada? This explosion happened in the winter when a shutdown of natural gas supply would have serious consequences.

Why corrosion might take down Energy East | National Observer
www.nationalobserver.com/.../why-corrosion-might-take-down-energy-east‎
4 Sep 2015 ... ... gave away, rupturing TransCanada Limited's 42-inch natural gas pipeline. ... From the mainline, the fire spread to a secondary gas line, weakening it. ... They included an explosion in near Beardmore Northern, Ontario in 2011 that ... A National Energy Board report cited corrosion as the cause of six other ...

PDF]
Energy East: When the pipeline spills... - The Council of Canadians
canadians.org/sites/default/files/publications/EE-Safety-Briefing.pdf‎
Report P09H0074, Transportation Safety Board of Canada. ... TransCanada's Energy East pipeline project would convert an up to 40-year-old natural gas.

I read in the Guardian that

I read in the Guardian that because of the Paris Treaty on climate 500 global institutions with assets of 3.4 trillion have committed to divest themselves of the fossil fuel extractive industries. Britain's low carbon green industries generate a turnover of 57.4 billion dollars and employ 1/4 million people. The growth of Britain's low carbon industries is outpacing the growth of the economy as a whole. This is the case in other European countries, especially the Nordic ones. Why is Canada so far behind in retooling its economy?.