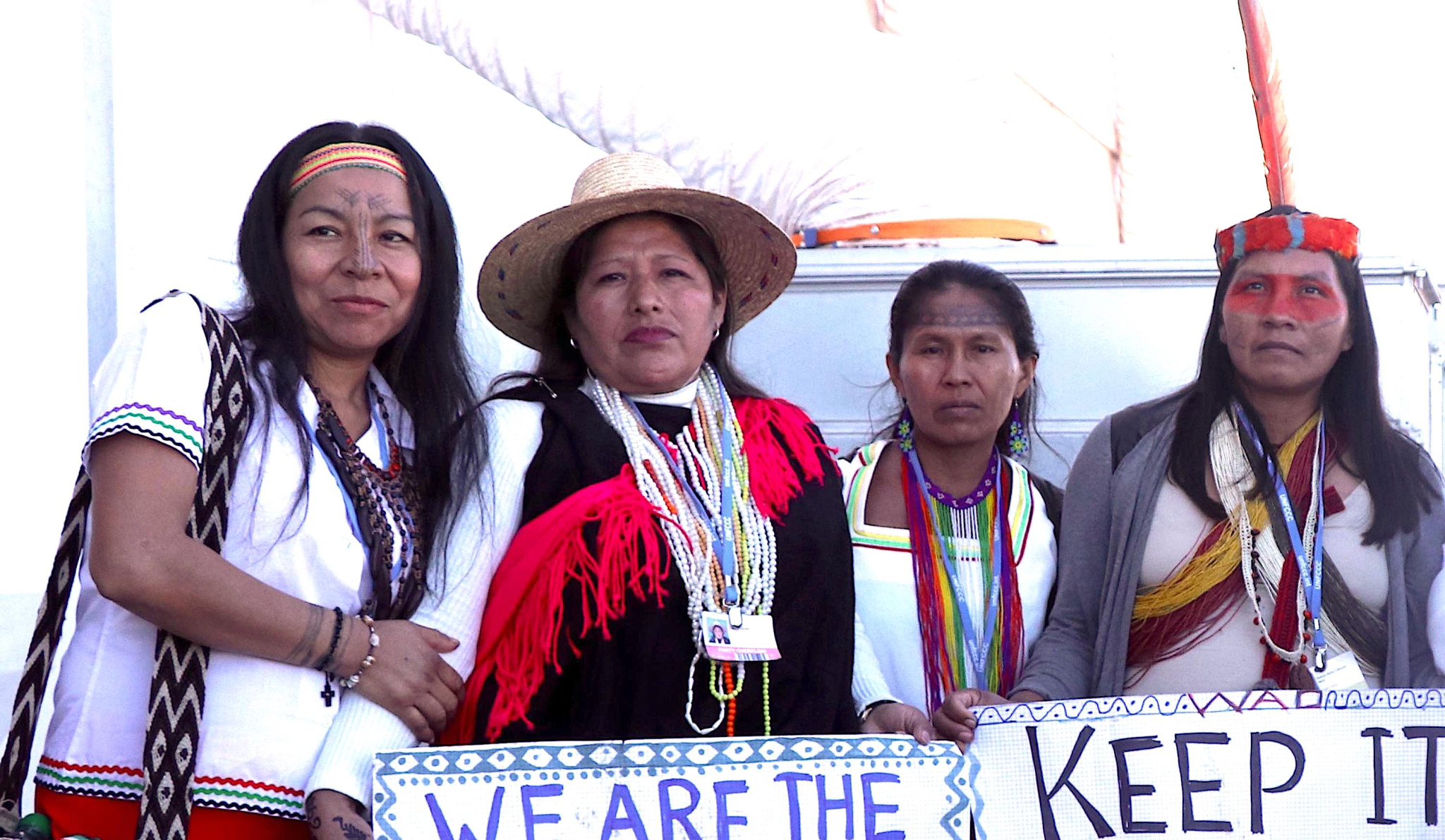 "We are struggling to save our territories," say the women of Chaski Warmi, a network of Latin American Aboriginal women speaking out at the UN climate summit in Marrakech in November 2016. Photo by Binod Parajuli.
Previous story
Next story

A year ago, Indigenous women from across Latin America began collecting local stories about how climate change is affecting their daily lives. They did this in order to craft solutions that aligned with their values.

Across their territories, this network of women is known as Chaski Warmi, meaning women messengers in Kichwa, a native language of the Andean region. Staying true to their name, these Aboriginal women, ranging from Guatemala to Chile, from Bolivia to Colombia and Ecuador, have brought their voices this month to the United Nations climate change negotiations in Marrakech. Together, they are proposing what they describe as an alternative development model. They say it would exert Indigenous rights and environmental justice as opposed to what they call "extractivism" or unsustainable development of resources.

As Indigenous women struggle on the frontlines of resource extraction and climate change, Ivonne Ramos - organiser with Chaski Warmi and coordinator of the Ecuadorian environmental organisation, Acción Ecológica - said that Chaski Warmi is part of the movement for justice, both human and environmental.

Here are some of their stories:

Indigenous women from Guatemala and Chile share their message of cultural resilience and environmental justice at COP22. Video by Binod Parajuli from climatetracker.org for National Observer.

"We are struggling to save our territories," said Gladys Panchi. Located in the department of Antioquia, Panchi's community of Karmata Rua, a farming region, is resisting mining on their land. As Indigenous women they are working to defend their community from resource extraction as a means of preserving their culture.

Martha Cecilia Ventura's community is striving to preserve its traditional health systems, which she said are becoming increasingly threatened by globalization and fossil fuel industries. Seeing themselves as instrumental to the solution, the members of her community encourage the ongoing use of natural medicines. "We use healing plant varieties to avoid going to pharmacies because we know that many illnesses are created by these very industries," said Ventura.

Understanding the inequalities of climate impacts, Ventura advocates for increased influence in national politics to ensure their voices are heard.

"As Indigenous peoples we are not responsible for climate change. It is industrialized countries who continue to produce without an end in sight," said Ventura. "We are here as Indigenous women to make sure our voices are heard."

"The truth is that 'development' is killing us," said Flores.

She said that increased industrialization was damaging her community's territory. She calls for distinct development approaches and perspectives which include traditional knowledge systems to ensure the protection of her culture and the earth.

Blanca Chancosa is the vice-president of Ecuarunari, a leading Indigenous movement in Ecuador which forms part of CONAIE, the Confederation of Indigenous Nationalities of Ecuador. Similarly to her partners in Chaski Warmi, she calls for a different model to growth, one that is equitable and just. She explained that her communities have been impoverished by logging and oil companies.

"Of course we want development," said Chancosa. "But not the type of development that abuses the forests, air, water, and land. We want our own model."

"Governments across Latin America have held an almost schizophrenic position, where on the one hand political discourse promotes energy transitions, but in practice there is a constant increase in fossil fuel extraction," said Ramos.

As the oil, gas, and coal frontiers to continue to expand, in some cases disproportionately affecting in Indigenous communities, movements such as Chaski Warmi are demanding alternative models of growth which respect their livelihoods and territories.

As part of Chaski Warmi, Chancosa stressed the importance of messengers, those who spread the word.

"I wish for even more messengers to defend our earth, water and life, so that we can weave a global thread, and make our voices resound even louder," Chancosa said.