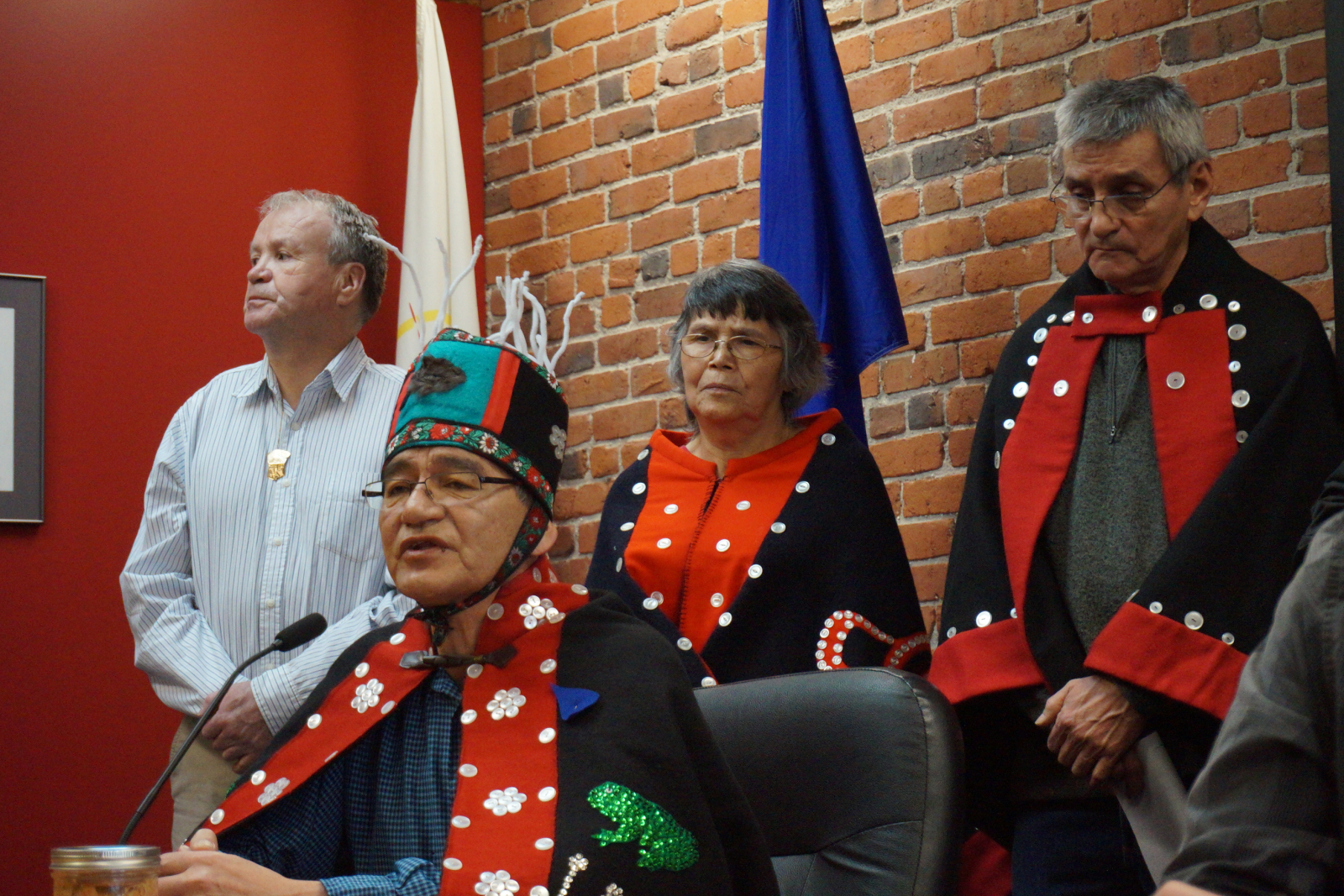 "We have a message for the Pacific Northwest LNG project's investors in Asia — sell your stock," Yvonne Lattie, Gitxsan Hereditary Chief of Wilp Gwininitw, said at a press conference in Vancouver on Tuesday. "The Canadian government's decision to approve this project did not respect our fishing rights protected under the Canadian Constitution."

Lattie, along with Gitxsan Hereditary Chief of Wiip Luutkudziwuus Charlie Wright, announced the request for judicial review at a press conference, joined by First Nations allies from across B.C. Their lawsuit was filed on behalf of 650 members in various clans and aims to derail a project they consider a "very risky investment" amid a global glut in LNG prices.

Critics say the project, led by the state-owned Malaysian energy giant Petronas, and slated to be built near sensitive salmon spawning grounds near Lelu Island, could trigger the collapse of the province's wild salmon runs which are among the largest in the world. But supporters of the massive terminal and pipeline project say it will generate roughly $2.5 billion in tax revenue for governments and 4,500 jobs during peak construction.

The two Gitxsan chiefs are from traditional territory near Hazelton, B.C., on the upper Skeena River watershed, where sockeye salmon runs have declined dramatically since the 1960s. Their court challenge builds on similar three lawsuits announced last October, filed in Federal Court by the Gitanyow and Gitwilgyoots tribes, and the SkeenaWild Conservation Trust.

"[Salmon] is vital not only for First Nations, but for the survival of many, many peoples," said Chief Lattie. "It's vital for our economy, and I don't know if anybody has ever thought this, but it's also vital for our wildlife."

Yahaan, Hereditary Chief of the Tsimshian Gitwilgyoots tribe of the Lax Kw'alaams, was among the chiefs who first filed a court challenge against PNW LNG last October and joined Lattie at the press conference. He slammed the Trudeau government for approving the project in the fall, calling it a "slap in the face" for many First Nations.

"(Environment Minister) Catherine McKenna took this very lightly while we were in Ottawa," he told reporters.

The federal government has taken a major step backwards in its efforts to build nation-to-nation relationships with First Nations governments, he added.

"You've given First Nations a slap in the face across Canada," he said. "You'd taken a giant leap forward, and everything you signed about the environment, you have not stood up to your promises. I will call you (Justin Trudeau) a bald-faced liar."​

Richard Wright, a spokesperson for Charlie Wright, Gitxsan Hereditary Chief of Wiip Luutkudziwuus, further criticized B.C. Premier Christy Clark's handling of controversial energy projects, including PNW LNG and the controversial Kinder Morgan's Trans Mountain expansion pipeline. He said he will be looking to back other candidates in the provincial election Premier Clark faces in the spring.

"The whole LNG and pipeline industry... we have yet to see any results of her promises and commitments blossom," he said. "So, I'd be looking for other candidates to vote for."

Richard Wright, a spokesperson for Charlie Wright, Gitxsan hereditary chief of Wiip Luutkudziwuus, at a news conference in Vancouver on January 10, 2017. He and other First Nations representatives were gathered to announce legal action against the Pacific Northwest LNG project.

Despite the flurry of lawsuits aimed at stopping PNW LNG from breaking ground, Environment and Climate Change Minister Catherine McKenna has continued to defend the controversial project. In September, she said the proposal had undergone a "rigorous three-year assessment" before being green-lighted by the federal government.

There are 190 legally binding conditions attached to the federal government's approval of the project, which is expected to ship 19 million tonnes a year of liquefied gas to Asia. Critics argue that the project would pump five million tonnes of carbon dioxide annually into the atmosphere, which appears to contradict the Trudeau government's strong commitments at the Paris climate talks in December 2015. If built, the Pacific Northwest LNG plant would become one the largest single greenhouse gas emitters in Canada, according to the Canadian Environmental Assessment Agency.

The First Nations representatives gathered at the press conference said the project would be stopped, and that B.C. First Nations have a track record of stopping energy projects that were approved without consultation and consent.

"When you have to take the step of going to federal court, it's embarrassing for the province of B.C. and the federal government," said Hereditary Chief Na'moks of the Wet'suwet'en First Nation Tsayu Clan. He said First Nations had a long winning streak against energy projects, and that Petronas' project was going to be defeated by Indigenous peoples asserting their legal title.

Pacific NorthWest LNG has said it has been meeting with local First Nations since 2012 and is continuing to work with them.

Editor's Note: This story has been corrected from a previous version that stated the Pacific NorthWest LNG project would cost $11.4 billion. The export terminal alone would cost this much; the entire project is worth about $36 billion.