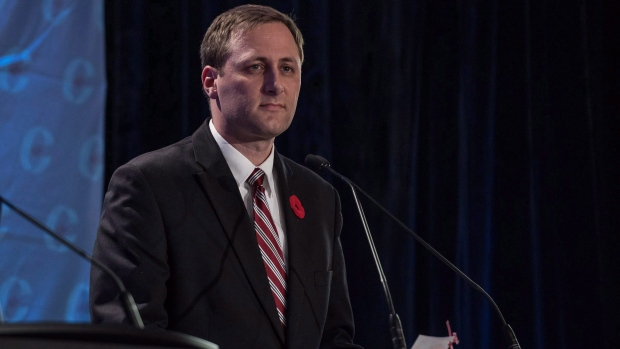 A public library has told a Conservative leadership candidate he can’t use their facility to host a meet−and−greet with pro−life supporters because the event’s "controversial nature" will lead to protests they can’t manage.

But the candidate, Saskatoon MP Brad Trost, says he believes the decision is more about the topic itself than any threat of protest.

"If this was an environmental group with a bunch of unemployed oilpatch workers protesting, I don’t think they would be getting the boot," Trost said Thursday from the sidelines of the Conservative caucus meeting in Quebec City.

"But that’s just my opinion and I can’t really prove that one way or the other."

Trost was supposed to hold meetings at a branch of the Saskatoon public library Saturday afternoon on a variety of topics; one of the advertised sessions was to discuss "respect for life."

Two anti−abortion organizations were encouraging their members to attend, and in response, a protest page cropped up on Facebook calling for those who support abortion rights to make their voices heard as well.

"I can’t believe this conversation is even still happening in 2017. So we’re going to protest!" read the Facebook invitation.

At the time the booking was made, the library was told the space was needed for a "day of reflection" by an unnamed group, but last week they were alerted to the anticipated subject matter by a protest organizer.

"We’re just not equipped with staff, security, space to manage to a protest against Mr. Trost," said Carol Cooley, the chief executive officer for Saskatoon’s libraries.

"It has nothing to do with his views, we definitely back intellectual freedom and the Charter of Rights and Freedoms. It’s just a matter of, ’Can we operationally handle the event and the resulting protest?’ And we really can’t."

Cooley said had they been made aware of the nature of the event at the time of the booking, they may have rejected the request, given the likelihood of protest.

Trost’s campaign said they weren’t trying to hide anything.

Originally, the plan had been for Trost to attend the event as a guest of pro−life organizers, but then it later morphed into a campaign event being organized by his team. The library wasn’t notified about the change.

In cancelling the booking, the library cited its "safe use bylaw," which forbids behaving "in a disorderly manner" or engaging "in any act having the effect of disturbing other patrons or library staff or preventing or hindering their use and enjoyment of library facilities."

"Given the controversial nature of the event," the library explained in a letter, they lacked the physical space, the staff and the security personnel to properly manage it.

Trost said that in Saskatoon, a city he’s represented as a member of Parliament for 12 years, pro−life views are hardly controversial and any protest surely wouldn’t need such a major response.

About 50 people indicated on Facebook that they would be attending the protest — billed online as, "Protest Brad Trost and his anti−choice politics" when it was set up earlier this month.

Trost decided to enter the Conservative leadership race last spring after the party voted in favour of dropping language from its official policy handbook that was against same sex−marriage.

He said while there is still space within the party to discuss socially conservative views, the incident with the library suggests the public space for those kind of discussions is dwindling.

"This basically explains why I’m running," he said. "There are people in the country who don’t want room for social conservatives to even talk about their issues."

The event has now been moved to a local hotel, but it appears protesters are hoping to be there too.

On the Facebook event page, organizers said that since the hotel is private property, they’ll have to set up across the street but are encouraging people to find another way in.

"Instead we’re encouraging people to register using fake names (and from a phone number that they can’t harass you on later) and raise poignant talking points during the so−called discussion," wrote one organizer calling herself Mercedes Jayne.