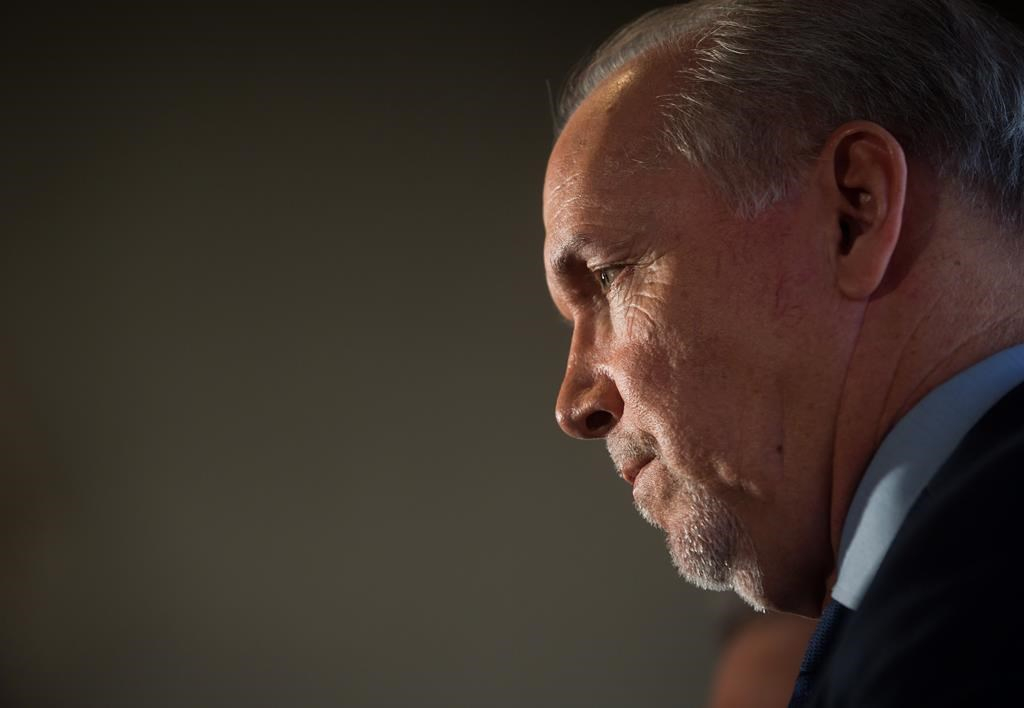 BC NDP leader John Horgan has promised that if his party wins the provincial election in May, he will put B.C. on a course for reduced carbon emissions and give rebate cheques to the public to offset carbon tax increases.

“We’ve got a problem here in British Columbia when it comes to climate pollution,” Horgan said at a news conference on Thursday in downtown Vancouver.

The Official Opposition leader said carbon pollution in B.C. has been rising under the government of Premier Christy Clark, and that carbon pollution in the province is forecast to increase 32 per cent by 2030 due to to a projected increase in oil and gas development, including liquefied natural gas (LNG).

That plan, Horgan argued, “isn’t working for people, it isn’t creating good jobs, and it isn’t good for our environment."

The BC Liberals leaked documents related to the NDP climate plan before Horgan gave his press conference, but it still received praise from environmental groups and members of Clark's own appointed Climate Leadership Team. Clark has faced criticism from the environmental community for failing to heed the policy recommendations of this team, and in August last year, released her own climate plan that critics labelled "full of holes."

If elected, Horgan would create a new Climate Leadership Team within the first 100 days of government and consult industry, the public, and the labour force on how to meet B.C.'s greenhouse gas reduction targets. He pledged to invest a portion of provincial carbon tax revenues directly into reducing emissions and climate change solutions, such as greener public transit, energy efficiency, clean technology, and other initiatives that will reduce dependence on fossil fuels.

Horgan said he wants to ensure families are burdened less by the increased carbon pricing, and that his government would issue a climate action rebate cheque for low- and middle-income families. Roughly 80 per cent of B.C. households would receive the rebate cheque each year, in advance. As it stands, the rebate goes to around 40 per cent of households in B.C., where the net income is under $40,000.

“We want to make sure corporations that are doing most of the polluting and profiting from it are paying their fair share, not families," Horgan told reporters.

A plan that shows "real action"

Environmental advocate and York University adjunct professor Tzeporah Berman, who was on Clark's Climate Leadership Team, suggested that the BC NDP's plan showed the strong commitment to climate that is currently lacking in the BC Liberal government. Berman was among those who strongly criticized Clark for releasing a climate plan in 2016 that they argued was not designed to reduce global warming pollution for at least a decade.

"Instead of a fake climate plan that allows emissions to rise, John Horgan's climate plan shows real action to defend our environment while making sure progress is affordable for all British Columbians," she told National Observer.

Marc Jaccard, a professor of sustainable energy at Simon Fraser University, told Desmog Canada that the BC NDP's plan had "concrete policies" to measure carbon impact, like the low carbon fuel standard. The standard was enacted in B.C. in 2008 with the goal of reducing the average carbon intensity of transportation fuels by at least 10 per cent by 2020.

“Christy Clark has not tightened the carbon fuel standard," he said. "Ever single year from 2011 to 2016 it should have gone up a notch and it never did."

The Pembina Institute, a climate and energy think tank, also expressed support for the BC NDP's climate plan.

"The B.C. government’s climate plan represented a piecemeal approach that the premier’s Climate Leadership Team warned will prove economically and environmentally ineffective," Pembina Institute spokesperson Stephen Hui told National Observer. "We are optimistic that today’s announcement will be followed through by delivering on the Climate Leadership Team’s package of recommendations and a strong climate plan that actually brings carbon pollution down."

The BC Liberals, however, criticized the NDP plan and called it a "cash grab" for BC NDP "pet projects."

The party slammed the Official Opposition's current support for provincial carbon pricing, despite having opposed it when the BC Liberals introduced it 2009. In a press statement, B.C. Environment Minister Mary Polak said the province's families were "taxed more than enough already," and that the NDP's proposed increase in carbon tax would only go toward increases in the cost of everything, from lettuce to diapers.

Asked for clarification, Polak's office responded through a spokesperson on February 6:

"In terms of Mr. Horgan's scheme, he is saying that he would collect the carbon tax and he would keep a good portion of it and spend it on programs. We believe we should spend to support climate action programs but we should do so without raising your taxes...Revenue neutrality remains the core principle of B.C.’s carbon tax. The tax can increase only if it remains revenue-neutral and every dollar is returned to citizens in the form of tax relief."

Asked how the BC Liberals would respond to the federal mandate to raise the carbon price to $50/tonne by 2022, Minister Polak said a national price on carbon must be "fair to all provinces."

Andrew Weaver, leader of the BC Green Party and a climate scientist, slammed Clark's team for leaking their opponent's documents, and criticized the BC NDP's climate plan itself as "only committing to do the bare minimum that is required by the federal government."

Horgan said the current provincial carbon tax primarily benefits the BC Liberals' corporate backers, noting that the province gives twice as much in corporate and business tax cuts associated with the carbon tax than in personal tax reductions. According to Horgan, 11 per cent of B.C.'s carbon tax revenues currently go to the low-income climate action tax credit, while 65 per cent of the funds goes to corporate tax cuts.

The B.C. provincial election takes place on May 9.

Update February 6, 2017: This article was updated with a response from Minister Mary Polak.

Promises, promises. Worth nothing.
Worth even less, are the endorsements and praise from controlled opposition eNGO's and supposed environmentalists, that fully support other NDP Climate Leadership Plans that claim fracking is "clean", with "limited adverse impacts."

Horgan is just presenting what progressives want to read, campaign courtship has begun. Appropriate climate actions, will never come to fruition from a fundamental fracked gas supporter, especially one so wilfully oblivious to the known and documented impacts.

"That seems sensible to me. When you don't have good options, you go with the least noxious, which for now seems to be fracking." John Horgan

Wish we could have a program

Wish we could have a program in Alberta that actually reduces emissions instead of allowing them to continue to grow.

What exactly is the "real

What exactly is the "real action" as mentioned above in the NDP Climate Plan? There is no mention of any concrete steps to encourage increased small and large-scale production of electricity. Nor are there regulatory steps to make it advantageous to migrate from fossil to sustainable energy. We have instead only the vague generalities that have been talked about for decades.