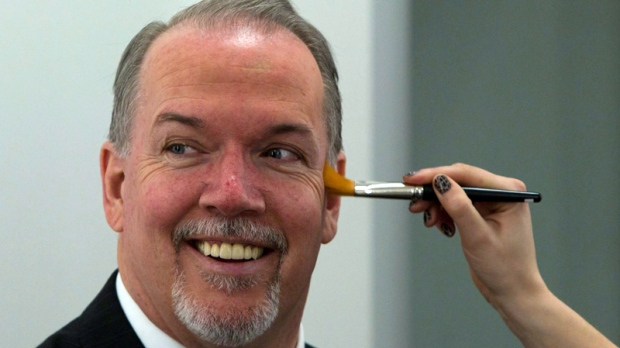 BC NDP leader John Horgan has makeup applied before a TV debate in Vancouver on Sat. April 9, 2011. File photo by The Canadian Press
Next story

His name isn't well known, that's for sure. But that's quickly changing.

John Horgan's been busy since taking over leadership of the BC NDP in 2014. His focus has been putting progressive politics back on the table while staring down the provincial Liberal government - an administration that has long been accused of wining and dining itself on corruption, scandal, and shortchanging constituents on everything from education to tax revenue from resource development.

Horgan may not make waves nationally, but in B.C., he may be the only candidate in the 2017 provincial election that can beat Premier Christy Clark, who was recently ranked as the fourth most-disliked provincial leader in Canada.

A believer in non-linear politics

To speak with Horgan is to delve into a highly-personal world of no absolutes. Despite carrying the orange banner of the NDP, known as Canada's left-leaning political party, the Saanich, B.C. native is slowly distancing himself from traditional linear politics.

Yet it is this balance that has drawn criticism of Horgan, who — in the recent NDP style of moderation — has been accused of being overly cautious about triggering backlash from media, and advocating wishy washy policies around energy and environmental issues that won’t incite wrath from voters on the right.

He has, for example, taken a strong stance against the controversial Pacific NorthWest LNG project proposed for northwestern B.C., and later told reporters that if certain conditions were attached to it, the NDP might change its mind.

His party website also runs a petition against the hotly-debated Kinder Morgan Trans Mountain expansion, which was approved by the National Energy Board with 157 conditions earlier this month. But when asked directly over the phone for his take on the oil pipeline project, Horgan’s position leaves a door open.

“At this point I don’t see how this is in the public interest of British Columbia and we’ll see how the discussion go over the next year or so,” he told National Observer.

Yes to pipelines, with conditions?

While the BC NDP leader believes that shipping the province’s natural gas to higher-priced markets is in the best interests of the public, he doesn’t believe in breaking ground on large energy projections unless B.C gets a fair financial return on its resources.

He also says proponents must make every effort to hire locally, First Nations must be meaningfully consulted through partnerships, and that consequences to the land, air, and water must be mitigated.

It’s a careful stance touted by many political leaders, including BC Liberal Premier Clark herself.

Clark however, has recently pushed forward the controversial Site C Dam despite an unresolved First Nations court case challenging it, signed a deal with Petronas of Pacific NorthWest LNG restricting future governments’ ability to tax it, exempted some natural gas projects from environmental reviews, and boycotted a national energy strategy.

“I cannot imagine another four years of the BC Liberals and Christy Clark,” said Horgan. “They’ve been in power for 16 years. They’re arrogant, they’re smug, they believe everything they say and do is correct and that is a danger in a democratic society.”

But criticism of his political caution won’t push him to make hard and fast decisions on anything else; even when answering questions in a timed interview, the leader seems paced and methodical:

“There are certain issues I hold fast to,” he said, “but I believe that there are a million people accessing natural gas in the Lower Mainland right now to heat their homes and cook their food, so we have to manage a transition away from fossil fuels over a period of time.”

Don’t be a bully

Horgan wasn’t always destined for politics. He was the son of a hard-working single mother, who taught him the value of respect, and that being “a bully” is never an effective method of achieving results.

As a young man, he worked in a mill and joinery, eventually earning his bachelor’s and master’s degrees from universities in Ontario and Australia. He was initially bent on a career as a social worker, but after meeting Tommy Douglas — the first leader of the federal NDP party — he felt he could bring about greater change through public policy.

He named his mother, his meeting with Douglas, and competitive team sports, including basketball and lacrosse, as having a big influence on his belief in working together across party lines.

It’s a lesson Clark would do well to learn, he said.

“I’ve been in the legislature since 2005 and I’m never surprised at how aggressively the Liberals choose to create division rather than create consensus,” he explained. “[British Columbians] prefer, instead of their politicians hectoring each other in the legislature, coming up with ways to make B.C. a better place.”

How far left will Horgan go to win?

With a party topped off by former federal and provincial Conservatives, it’s no secret that the BC Liberals govern from the centre-right, much like the federal Tory party. It was even suggested in a humorous way after the 2015 federal election, that Clark run to replace Stephen Harper as leader of the Conservative Party in Ottawa.

The NDP was considered to be the frontrunner by pollsters going into the 2015 election, but pundits believe party leader Tom Mulcair lost his edge with progressive voters for drifting too far centre.

And while the BC NDP have a much more successful record in British Columbia with four consecutive premiers between 1991 and 2001, the same kind of centrist approach as Mulcair may prove troublesome for Horgan.

When asked how far left he would be willing to go in the May 2017 provincial election to brand himself as the progressive alternative to Clark’s right-wing party, his response was once again, cautious:

“I believe in my soul that I need to be where the people are,” he told National Observer, “and the people want good government, they want balance, they want ethical behaviour from their politicians and they want outcomes that benefit the community.”

The BC Conservatives have no seats in the legislature, and the BC Green Party has one. This gives Horgan an edge to portray himself as the only viable opposition in the race.

Horgan’s party stands for all the classic NDP values, including getting big money out of politics, affordable child care, and investments in early childhood education. It has recently held Clark to account for massive, chronic cuts to public education, Metro Vancouver’s skyrocketing real estate market, and repeated charges of corruption in the premier’s office, like the infamous triple-delete email scandal.

He admitted that the party has yet to make major headway on many of these issues, but added that despite this political brick wall, he has never been more motivated.

“The inability of the opposition to effect change... is why I became leader of the NDP and why I wanted to defeat the Liberals in the coming election,” he explained. “I want to unite the forces of progressive politics of British Columbia, I want to create as big a tent as possible of all those disaffected by the current government and those who want to make a better B.C.”

In Horgan’s world of no absolutes, sharing power among people and politicians appears to be paramount.