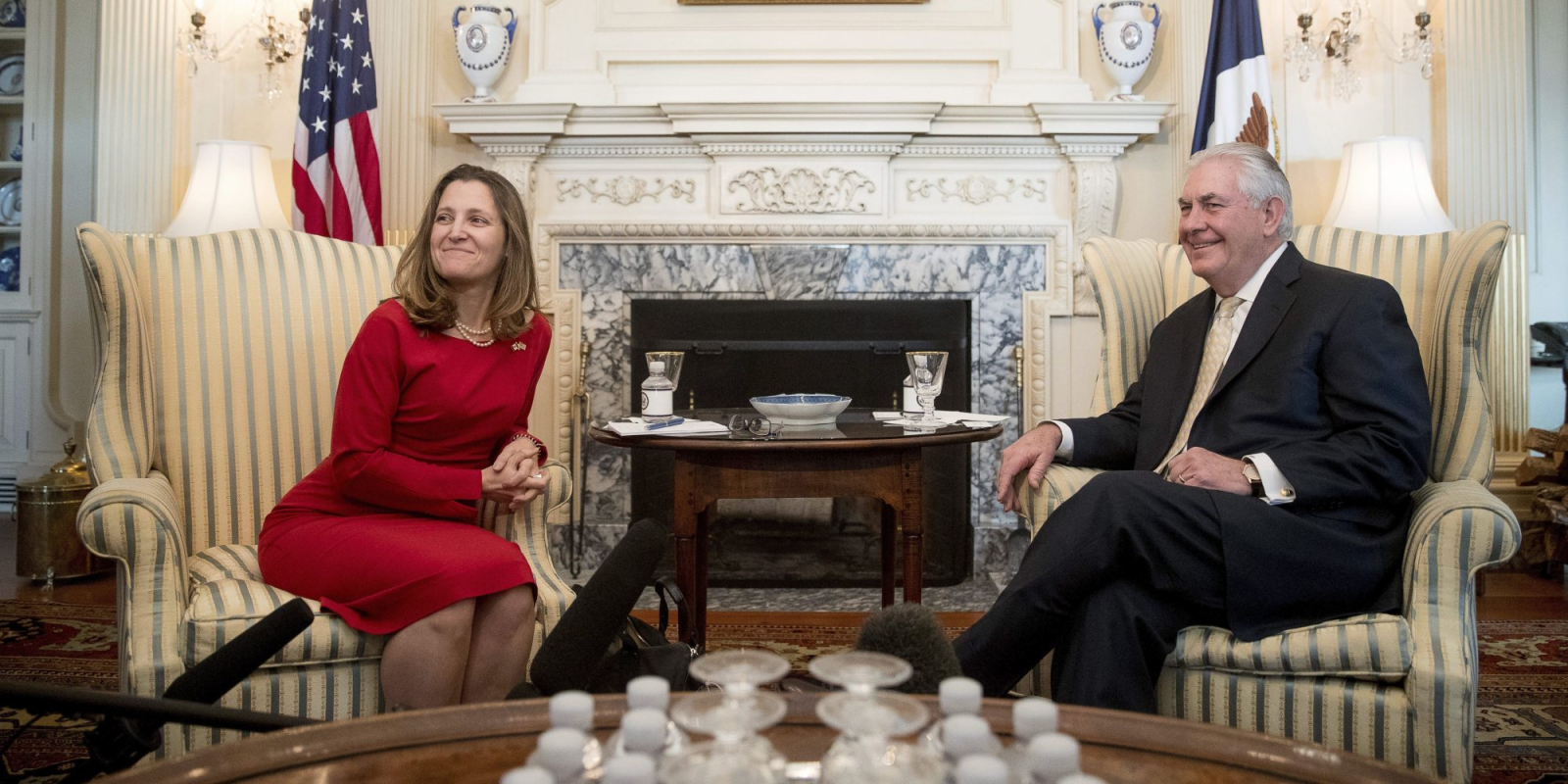 I do get it. I can only imagine what it must be like for Liberal ministers faced with this dangerous new president next door.

Yes, he's irrational, abusive. Tacitly supportive of white supremacists, and he's already enacted legislation that discriminates on the basis of religion, which goes against the very grain of Canadian values.

But America is our greatest trading partner, and we need to keep the relationship for the sake of all the jobs at home. We have to be practical.

But is an outright charm offensive the right path?

Suggesting Tillerson will be 'good' for Canada is mind bending.

I asked Bhupinder Liddar, a retired Canadian diplomat and former publisher of Diplomat & International Canada Magazine to help me understand the intricacies of diplomacy and what he thought of Minister Freeland's comments and he told me this:

"Unfortunately, Canada's Minister Freeland went gaga over U.S. Secretary Tillerson," he said. "Sure, one understands that Minister Freeland had to prove to the public and Canadians back home that she got something out of her meeting with Secretary Tillerson, but she ought to remember that what is said publicly in diplomacy is often at odds what transpires privately behind the scenes. She ought to be cautious, lest she has to eat her own words down the long and winding political road."

So, who is Secretary Tillerson?

Secretary Tillerson helmed an oil company that acknowledged internally that climate change was happening for decades, but actually funded climate denial campaigns. Tillerson then refused to acknowledge he had any part in it all when testifying before the Senate during his confirmation hearings. In this age where we need to expose 'fake news' and 'alternative facts' with reality, this is deeply disturbing.

Exxon knew, but chose to pretend they didn’t know. And their CEO of recent years claimed ignorance.

Not only did Exxon know, the company funded climate change deniers (the company denies it, but tax records tell a different story).

I just can't believe the same government that led efforts to hold global warming below a 1.5 degrees increase in Paris can possibly think that Rex Tillerson is good for Canada.

Exxon owns 76 per cent of Imperial Oil which owns Esso Resources which owns a big slice of the oil sands. They talk about keeping trade open, but I think they mean it's going to benefit Exxon. What concessions on lumber, fishing or manufacturing will Canada make to Tillerson for the benefit of big oil?

And in case you forgot about this, just a few months ago, National Observer reported how Imperial Oil was lobbying the government to change Canada's Arctic drilling laws so that its consortium of big oil partners could avoid relinquishing hundreds of millions of dollars to taxpayers.

And consider that Tillerson is, by far, not the most climate obstructionist member of Trump's cabinet. He's one of the only people around Trump who has actually supported staying in the Paris accord. Tillerson publicly acknowledges that climate change is happening, he just doesn't see it as an "imminent national security threat" and opposes aggressive action to stop it. The rest of Trump's cabinet is more extreme than the former CEO of ExxonMobil.

When National Observer managing editor Mike De Souza asked Freeland's office if she'd asked Tillerson where he stood on climate change, he got no reply.

But on Monday, we may know more about where Canada intends to stand. Prime Minister Trudeau meets with President Trump.

I honestly feel sorry for our prime minister. Just as the New York Times is condemning President Trump for sending a mother back to Mexico, a woman who has resided in the U.S. for 21 years, harming no one, then throwing a tantrum against the courts for overturning his 'Muslim ban,' Mr. Trudeau must go and try and negotiate the best deals possible for Canada.

In defending our economy, which the prime minister absolutely must try to do, I wonder what he might sacrifice in terms of his values, and Canada's.

We have to be practical but we don't need to cozy up to Trump. Canada has often charted an independent course and we are better off for having done so. Liddar reminded me of an admirable history that speaks to this: "... not going along with economic embargo of Cuba, under the Progressive Conservative government of John Diefenbaker; not sending troops to Vietnam; maintaining our diplomatic relations with Nicaragua when USA severed them; and former Prime Minister Jean Chretien's refusal not to join USA to invade Iraq. Some in cabinet argued that Canada would lose economically in its economic relations with the U.S. for not joining the Iraq invasion. Others questioned why should Canadian young men and women die to protect Canadian corporate interests."

It's a critical moment. Suddenly, businesses, politicians, ordinary citizens, are being called to take moral stands. In the last week, we've reported on Steve Bannon's extremist website, Breitbart.com, selling a t shirt touting war. "Are you ready for #war?" it asked, the day after Trump announced his ban against immigration from 7 Muslim countries.

And in Canada, citizens are calling for Shopify, based in Ottawa, to close down Breitbart's account. Shopify refuses to do so, citing freedom of speech.

As one of our readers commented at the end of our report on this,

'I can follow Tobi Lutke's (Shopify's CEO) reasoning but I don't agree. He is trying to escape the problem by invoking freedom of speech and saying that companies should be neutral conduits for goods and services. However, it's hypocritical to tolerate speech filled with hate, speech that encourages the growth of prejudice and a "we-they" mentality, using the excuse that morality cannot be dictated. Sounds as if Mr. Lutke is thinking only of Shopify's bottom line. And if companies have "persons" status under law--which I personally think is a big mistake--they may be guilty of hate crimes, just as ordinary people can be, if they tolerate groups like Breitbart. I don't think I'd patronize Shopify as it's too hypocritical for me.'

I struggle over moral dilemmas, too. These days I'd be a fool if I didn't think writing this column could mean I'll be stopped from entering the U.S. someday, labeled as 'anti-Trump.'

Perhaps it's better just to focus on happier things.

It's the safer choice.

But in times like these, the safer choice isn't the right choice. Not in the long run. Not for any of us as individuals, and not for our federal government.

As Liddar says, "Canada needs to chart an independent course in foreign and economic policy vis-a-vis the USA and stick to this course of action, especially in the uncharted, unpredictable and perhaps turbulent times ahead during Trump presidency."

Canada's ministers must be diplomatic. They just shouldn't go too far.

"There is a strong, consistent and urgent need to educate the U.S. Congress that USA needs Canada as much as Canada needs the USA. Canada is the largest trading partner for almost 35 US states and a secure supplier of energy for the U.S. Canada is also a trusted and reliable partner to ensure security of the U.S.," Liddar notes. "Would USA like to have two belligerent, hostile and unfriendly neighbors in Canada and Mexico? Canada needs to be more blunt in sending this message the U.S. Congress and its people."

In short, he says, "No need for Canada to be bullied around any longer."

On Monday, when Trudeau has that difficult meeting with Trump, let's hope he finds the way to navigate the right path, blending Canadian manners with Canadian resolve.

Meanwhile, we're still waiting for Minister Freeland's office to answer Mike De Souza's query about what she may have asked Secretary Tillerson about climate change.