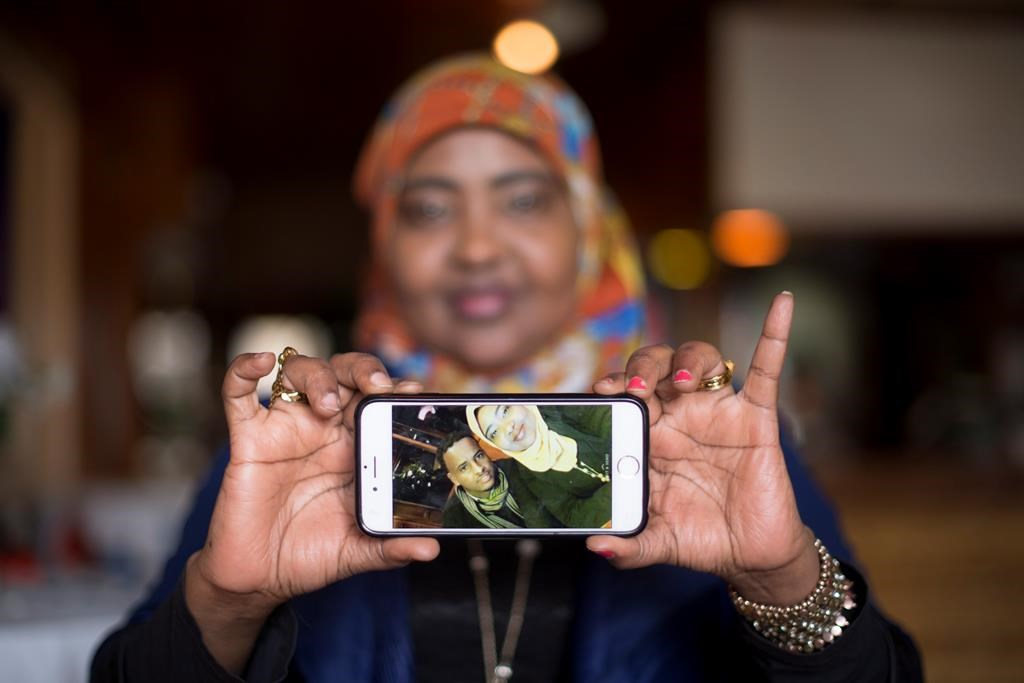 Saciido Shaie holds up her phone as she speaks to a reporter in February 2017 at a cafe in Minneapolis to show an image of her friend, Mohamed Badel, who crossed the border into Canada to seek asylum. Photo by The Canadian Press
Previous story
Next story

Saciido Shaie says something seemed to be weighing on her friend Mohamed Badal in the days before he vanished.

Badal, a Somali man who spent months trekking four continents before landing in the United States, had been preparing to appeal a rejected asylum application when Donald Trump became president.

"For an entire week he was anxious, he was scared," Shaie says over tea at Daalo Grill, a Minneapolis East African restaurant where she, Badal and a big group of friends would regularly hang out.

"You can read from his face."

The Trump administration's hardline views on immigration have rattled many in the Midwestern city's large Somali community, regardless of their immigration status, says Shaie, a community activist.

Trump singled out Somali newcomers at a campaign rally in Minneapolis two days before November's election, saying the city had "suffered enough" from their presence. Somalia was also among seven Muslim-majority countries targeted in a travel ban imposed suddenly last month, which has since been halted in court.

Shaie says her friend, who had been authorized to work night shifts in a warehouse, feared he could be arrested and deported at any moment.

She says he feared having to return to the war-torn homeland he had fled.

"You don't want to go back to Somalia right now. There's no opportunity. There's nothing there," she says. "You have people who are 20-something who have not even been to school."

She noticed Badal hadn't stopped by Daalo Grill in a while and when she tried calling, his phone was disconnected. No one else in their circle of friends seemed to know where he was.

When Badal finally reached Shaie, he was in Winnipeg.

"You're kidding me," she recalls saying. "How did you end up there?"

He told her he walked for hours in the freezing cold through a snowy field in order to cross from North Dakota into Manitoba.

He left his car in Minneapolis, so Shaie figures he must have gotten a lift to a town near the border.

By the time Canadian authorities found Badal, one of his legs was swollen from the cold and he could barely speak.

"He told me that he thought he was going to die," Shaie says, recounting their conversation a few days after he entered Canada.

"He was just telling me he was thinking about his mom because his mom was telling him 'at least if you want to die, come die in your country because I want to see your body.'

"So if he died, no one would have known where he'd end up."

Badal was among dozens of refuge-seekers found trudging through snow-covered prairie along the border near the town of Emerson, Man., in recent weeks. Most of the people are from Somalia, Ghana and other African countries.

On Sunday, RCMP said in a news release that 22 people were intercepted overnight illegally crossing the border near Emerson.

There's nothing new about people eschewing official border crossings between the U.S. and Canada, though RCMP say the numbers have been on the rise in recent months.

The tactic is a way to get around the Canada-U.S. Safe Third Country Agreement, which would cause anyone who had already applied for refugee status in the U.S. to be turned away at an official border crossing in Canada. But if a person crosses somewhere else and applies as a refugee, the case is heard by Canadian authorities.

It's a dangerous gamble to jump the border in the winter. Two men lost fingers to frostbite after a 10-hour trek across Manitoba fields of waist-high snow in sub-zero temperatures over Christmas.

Since Badal was found by police in Canada, he can stay in the country while his paperwork is sorted out.

Shaie says her friend is doing fine and has since travelled to Toronto, where he has family.

She wishes she knew beforehand what he was planning to do.

"I would have said 'we'll figure out something, we'll advocate for you, find something for you.' But walk to Canada?"

Badal "spent months walking across four continents" to get to the US, where he was given permission to work. After illegally crossing through dozens of countries and failing to apply for asylum in any of them, it is unsurprising that his application was rejected by the US. Instead of appealing, or continuing to work, he chose to illegally cross into yet another country and try again. How much did he pay to be smuggled to the US? Those paying human traffickers are inciting crime along with directly benefitting from it. It's time they were charged along with those doing the driving.

These stories are horrifying

These stories are horrifying and sad. The West has made such a mess of the Middle East and Africa by siding with dictators and propping up dictators. Many of us have sponsored children in Africa but all this seems to do is absolve their own governments of any responsibility so they can strip resources out of their own countries into foreign banks--or foreign real estate. And those at the bottom with no opportunity or security roam the world looking for a safe haven, but often competing for jobs with the least educated in the countries where they land. It's time for a global effort to stop the conditions that are creating this tide of human misery.